Not watching the WC, I’m well ready for this.

Notable players missing through injury, still being at the WC or given a few days off in Nunez’s case.

Ideally it would be a run out, nothing spectacular, ease the lads back into things… but knowing us we’ll come flying out of the traps and try to win it 7-0. As long as there are no injuries, that’s fine with me.

Jones is a maybe for the first mid-season game, as he’s been training apart from the rest of the squad.

Expect Doak and Bajcetic to get some decent minutes as they’ve been in the training photos a fair bit.

Hopefuly TAA and Hendo are back after Saturday with a 1.86M little present for the fans

What’s this? A Liverpool game I see.

No injuries and a few returnees is all fine by me.

What’s you pre match friendly record for games during a World Cup?

Is it only broadcast on lfctv.

Officially yeah looks like it… most stream sites only post schedules a day in advance but there’s a chance someone might be streaming it. Wait and see

I find it odd this is clashing with the women’s game and they are both on LFCTV.

You could schedule it for anytime really.

According to live football on tv 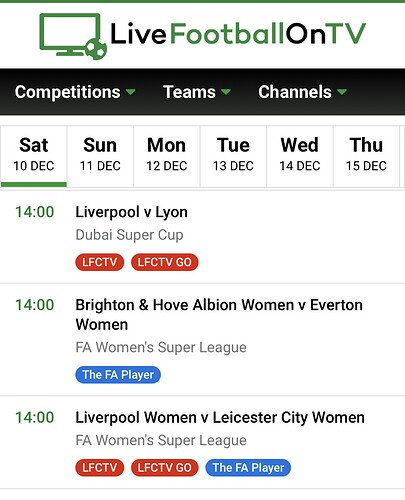 I know it’s only a friendly but I have missed you Liverpool.

In terms of date, probably chose one that does not have a world cup match and in terms of timing, with the weather, they probably wanted to play only in the evening so any time after 6pm Dubai time made sense so unfortunately it would always clash with the women match if by that measure.

Thank god proper football is back. I can’t watch live, so I’ll have to watch it tonight.