I like having a villain to hate, but I’ll draw the line at Guardiola. Agree with @RedOverTheWater , he’s a symbol of the shit direction football is heading in (Pep, not ROTW)

It was a long way from peak Barcelona when he took over, hence the job being made available.

You are probably right, but I’m not letting facts get in the way of a minor rant, while I kick Guardiola in the nuts. Or if that is a little too strong, I am shrugging my shoulders in his direction with an Alan Partridge expression on my face, as I’m not as impressed as he wants me to be!

Against all odds Guardiola made them winners!

I would love to see Pep manage a team without the cheque book to buy whoever he wants. I think he would be high on the sackrace list

Yes, they were a wonderful team, but he inherited only 4 of those players, and did so from a side who finished 3rd in a 2 team league. The rest he either brought in or promoted form the academy. For the likes of Pedreo, Busquets, Pique…there is no guarantee those are players who establish themselves at a Barca run by Rijarkd or anyone else they bring in as his replacement with an eye to buying players to reestablish themselves.

I like having the world’s best managers as long as possible in the league I’m following the most.

Ah the all about football argument which conveniently glosses over the how, the where and the why. Fuck him, the cunt.

Nah, not only about football (though mostly). I like him both as a manager and a character as well. Surely not liked by all, which I understand why. But I’ve got no problems with him.

Looking forward to more battles with City and between our top managers, some of the best football games in last years. 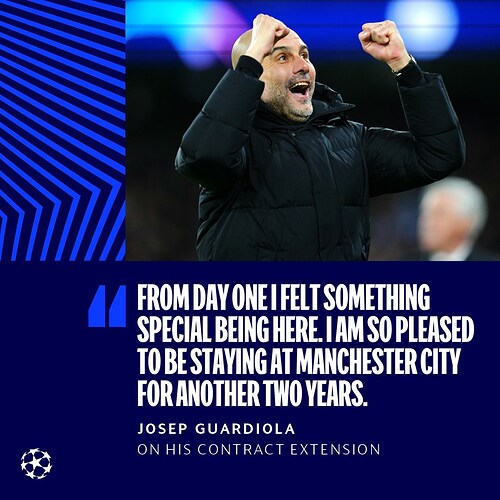 We all know that special something you felt Pep…

Even though it’s not public, estimates have his contact around 400k a week before bonuses… I mean, sure, why not

Let’s hope it has the usual bounce and they fall even flatter next month.

My problem with Pep is that he is a liar and a hypocrite. He said he’d walk if City were doing anything untoward with regard to FFP.

The CAS hearing proved they were, and yet he’s still there.

I think you misunderstood. What he meant was he’d walk if they were unable to come up with an excuse the press would pretend to believe to allow them to continue on in their corrupt ways as if it was above board.

Halaand was cheap at only 50 million didnt you know.

Is that the extra kilos of coke he gets per week?

Even though it’s not public, estimates have his contact around 400k a week before bonuses… I mean, sure, why not

I expect Man City to announce another huge sponsorship deal soon,
(another company with 1 employee as per…)

@FabrizioRomano
Newcastle have reached an agreement to hire Paul Midgley as Head of Youth Recruitment — joining from Man City where he was regional scout. 🚨⚪️⚫️ #NUFC Agreement in place and deal done as Newcastle want to improve all club’s areas.

This amuses me, but at the same time shows the £ being offered for jobs at all levels of football is on the up.

Suspect Midgley was already earning more than the average recruitment head in football.

I assume they are heading down the Chelsea route effectively buy about 50 youngsters and loan them out, though I assume that’s somewhat more restricted now.

I assume they are heading down the Chelsea route effectively buy about 50 youngsters and loan them out, though I assume that’s somewhat more restricted now.

Could be the city model, bring in talented youngsters to then sell and help fund the big purchases?

Anyhow it’s a big step up judging the title of roles.