The most popular league that players are sent to is League One, with 38 players there. The Championship comes in second, with 34. League Two third with 33. Only two players have been loaned between Premier League clubs (Levi Colwill from Chelsea to Brighton and Man Utd’s U18 goalkeeper Eric Hanbury to Southampton).The most popular foreign leagues players have been sent to are the Scottish Premiership Scottish Championship & Eredivisie (6).

The lowest level league that one of these sides has loaned a player to is the Northern Premier League Division One West - that player being Liverpool’s Marcelo Pitaluga.

Arsenal have the most U21s on loan with 17. Liverpool are second (15) and Chelsea third (14). Derby are the only side to not have any eligible players loaned out of the club.

Why was he loaned. He’s back at Southampton after a week or so. Surely United have a u16 keeper if they have an injury crisis?

Why was he loaned. He’s back at Southampton after a week or so. Surely United have a u16 keeper if they have an injury crisis?

It was Southampton that loaned him in, looks like it was just some emergency cover for them for a couple of weeks.

See Sepp got the start at CB for Schalke, went the full 90 plus in a 1-1 draw at Stuttgart.

Think this will be great experience for him, and would not be surprised to see him in the first team next season.

Bradley scored again for Bolton. 3 goals and 3 assists in 10 games.

and would not be surprised to see him in the first team next season.

That’s very productive for a wingback.

No, we want our players to be doing well on loan.

The Liverpool loanee was handed a two-match ban following his challenge on Ross County's Callum Johnson.

Watching van den Berg with Schalke, he is doing oké

Tyler Morton helped Blackburn Rovers to a 2-0 victory over Watford in the Championship in midweek.

The Liverpool loanee played a key role in the second goal at Ewood Park, as the midfielder’s corner was flicked on to find teammate Dominic Hyam.

In the same division, defender Rhys Williams featured for 84 minutes in Blackpool’s 3-0 defeat by Rotherham United.

In League Two, James Balagizi and Vitezslav Jaros faced off as Crawley Town took on Stockport County, with the Reds duo both seeing full minutes as Town ran out 3-2 winners on the night.

Max Woltman was handed his Doncaster Rovers debut against Barrow, stepping off the bench in the 62nd minute during the 2-0 loss.

Adam Lewis picked up more first-team action as a second-half substitute for Newport County as the Welsh side were beaten 1-0 by Stevenage.

Paul Glatzel came on for Tranmere Rovers in their 2-1 defeat by Bradford City, but the forward was forced off shortly after his introduction due to a suspected hamstring injury.

Paul Glatzel came on for Tranmere Rovers in their 2-1 defeat by Bradford City, but the forward was forced off shortly after his introduction due to a suspected hamstring injury.

He really has no injury luck, does he? 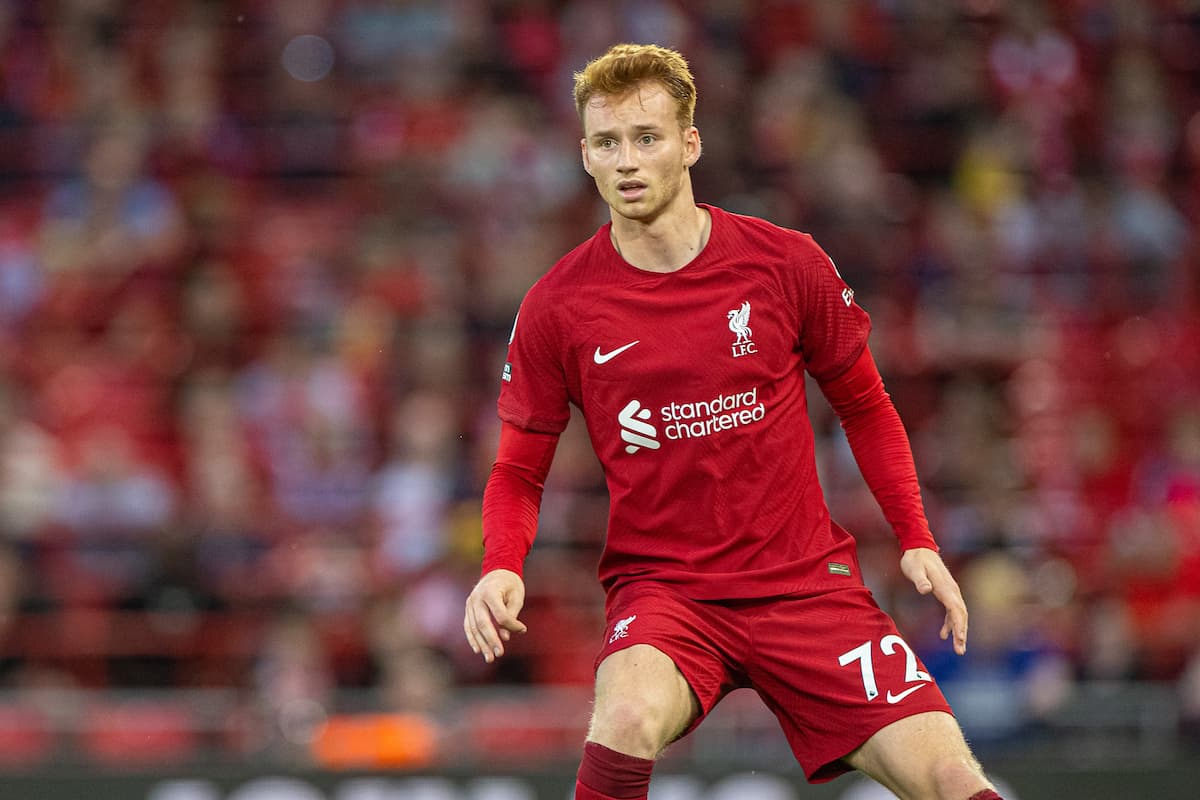 "My dream remains to succeed there."

Read that yesterday myself. Really like this kid, and think he has a future with the Reds. He’s only 20, and was considered PNE’s best player last season, and has stepped right into a Bundesliga side as their starting RCB. Definitely see Sepp, Joe, and Iba as the future of LFC’s back line. And, the future looks bright.

I really hope so, he looks like a lad with a smart head on his shoulders. He accepted that he wasn’t going to break into this Liverpool side, went out on loan, did his best and seemingly continues to do so at Bundesliga. I must admit I was and still am afraid about his prospects because Schalke don’t look like a well-run club to me these days - I hope I’m proven wrong in Van den Berg’s case.

Fair points. No matter how shit a club Shalke is, getting 90 minutes a game in one of the best leagues in world football should do wonders for his experience level. And, he is a full 2.5 years younger than Konate.

There are so many 20 year olds playing in the top 3-4 leagues, how does Sepp make himself stand out from the rest or enough so that he catches the eye of Klopp?

I can assure 1 win from 7 and conceding the 2nd most goals in the league won’t do that. Don’t see how this his future pans out any differently to say a Harry Wilson.

It probably makes him stand out considering he is a Liverpool player.

I assume Klopp understands the limitations of Schalke far better than you do. It’s not about how Schalke perform it’s how Sepp grows as a player at Schalke, the kid is 20 playing in a top professional league and won’t cost 40m to buy in the summer having already spent several years in the Liverpool family.

That’s the whole basis around Loans especially when a kid is 20, if he was sitting on the bench twiddling this thumbs I might agree with you but he’s playing in a newly promoted Bundesliga top flight team. It’s a learning curve for players at that age.

You want to buy three midfielders and then want to junk a potentially CB/RB option in the bin to buy someone else who would sit as 4/5 choice at the club? Tell me who this potential star buy would be? He may not develop but I’ve seen enough to suggest he is on the right trajectory.