After tonight’s win against Arsenal we’ve given ourselves a good shot of getting back into the top 4. City have won the league and United are in a good position to finish in the top 4, if not necessarily 2nd. But the other teams from Leicester down to Everton are still in the mix, I feel.

The remaining fixtures for and between these sides are interesting, particularly the prospect of teams taking points off each other.

Chelsea are currently in 4th on 51 points with 8 games left so that will be my starting point. Here are the remaining number of games for the teams from 3rd to 8th and their fixtures against the top 8.

That’s some good potential there for teams in and around us to take points off each other.

Fingers crossed chelsea fuck up and we take advantage.

That’s some good potential there for teams in and around us to take points off each other.

Doesn’t mean much if we don’t perform. We are capable of beating anybody; equally, we have lost to dross like Burnley, Villa and Brighton.

Ultimately, it’s not about what the other teams do but how we play.

It means they’ve got less points to play for between themselves though, that’s really the point. I accept easier fixtures for us on paper haven’t really turned out that way for us this season but in Leicester v Chelsea, for example, at least one of them will drop points, etc. 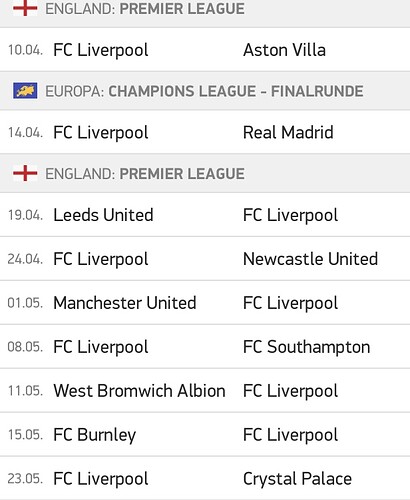 Still can’t see us finish in the Top4 tbh. We’ve been too inconsistent all season.

But, the next PL game is such a big hurdle.

and we are playing against Villa who beat us 7-2 on matchday 4.

I know it’s one game at a time but I’m seeing it like this:

Beat Villa, Leeds and Newcastle and we will be favorites to end up 4th even if we just get a point at Old Toilett.

We have a chance, a slim chance, but more than we did 3 games ago. However, City and Utd are safe, so there’s two spots up for grabs.

Leicester bottled it last year and let Utd in at the last minute, they have a good advantage over us, but do have a tough run in. So (hopefully) they could drop a number of points a repeat last season’s implosion.

Chelsea, barring the slip up against West Brom, have looked very good under Tuchel and could conceivably win all their remaining games. With the league all but wrapped up, City could have their priorities elsewhere when they face Chelsea.

I’m confident the other teams will fall away, though West Ham have been stubborn and Spurs may last the pace if they keep Son and Kane fit. However, I still feel we’ll be ahead of West Ham, Everton and Spurs come match 38.

Bearing all this in mind, catching and overtaking either Chelsea or Leicester will be no easy task. We’ve 8 games left, I honestly think we’ll need to win at least 7 of them and with the lack of consistency we have shown this season, I’m not sure we’re up to the task… but hey, we’re Liverpool, we make the impossible possible!

Interesting. City has to win their next four games to be champions, the Chelsea game is their fourth.

Surely there’s going to be an extra level of motivation against Villa. If we can’t beat them, Leeds and Newcastle we don’t deserve top four in fairness.

We don’t deserve CL so far because of

We have CL 'distractions‘ before Villa and Leeds and hopefully around Newcastle too.

You’re right, I think that we should decline our CL’s spot if we get it.

We don’t deserve CL so far

So we had a poor run of form we’re still the best team in the world, Man City have had a run of poor form in every title challenge they posed they still deserved CL footy and if we pull it off in any form, top 4 or actually winning the CL this season we will have deserved it imo.

Good result for us in the Newcastle v Tottenham game.

Why aren’t you considering United as well. They aren’t much better than Leicester and have some very tricky games.

If you reduce the number of times we were fucked over by the refs/VAR, we would be at least +5.

End of the day the WBA and Newcastle games this weekend would have probably been two of the last games I expected would help us, it is what it is and will be what will be.

If we are near perfect from this point on then I’d hope that 4th was ours.

We’ve been showing signs of life lately but I won’t believe we’ve got a chance of finishing top 4 until we improve our home form. Even during this really bad run our away results and performances have been OK. It’s at Anfield where we just can’t win or draw a game or even score a goal. We seem to have acquired a mental block about playing at home and that’s going to be difficult to overcome.

I never would have believed that any Liverpool team, even the really shit ones that I witnessed under Hodgson and Souness, would be capable of losing 6 home games on the bounce. Beat Villa at Anfield on Saturday and that would be a massive boost for us.

I never would have believed that any Liverpool team, even the really shit ones that I witnessed under Hodgson and Souness, would be capable of losing 6 home games on the bounce.

It’s so strange because we went on such a historic, huge, undefeated run just before it. Its almost like PTSD that being unbeatable at Anfield had become such a huge emotional thing for our players that we seem traumatised by that first loss.

Beat Villa at Anfield on Saturday and that would be a massive boost for us.

Yeah agree with this. A home win is most definitely needed in order for our lads to get their confidence back. If they can get the three points, especially in-between two pivotal CL games, then we can look into the near future with much, much more confidence.

I know where I was: in front of the telly, watching Sadio Mané give the Reds an early lead against West Bromwich Albion at Anfield. Little did I suspect that, over three months later, I’d still be waiting for Liverpool to score their next goal from open play at home.

If we can put that right against Villa, that would be a start.