A thread to post and/or debate on matters of international football. World Cup qualifiers, Euro qualifiers, Nations League and friendlies, all goes in this thread because I command it to be so with the powers invested in me as a mighty thread starter.

We have a thread for Nations League

We need a big bin rather than a thread for nations league.

Giroud’s brace tonight took him to 42 goals in his 100th cap for France.

Puts him above Platini. Henry is on 51. 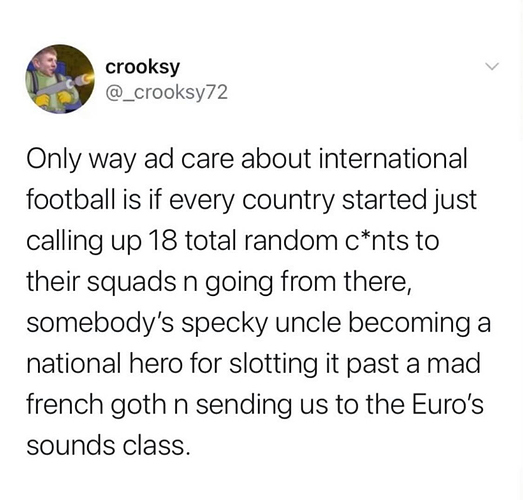 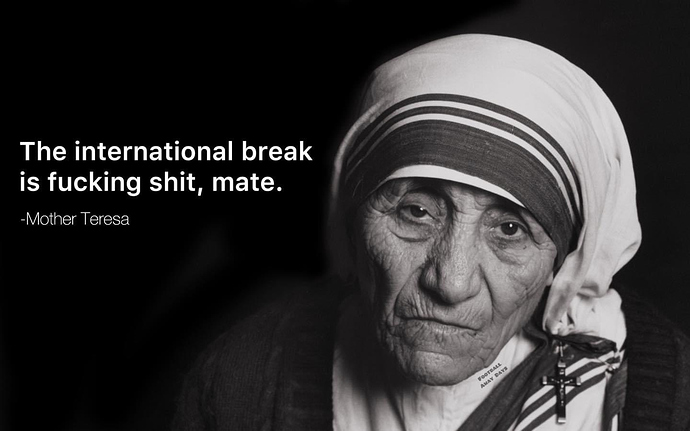 We lost very deservedly to Serbia. So it is next time again…

1 goal in 4 games for ireland now yet i keep hearing how great the performances under stephen kenny are.

Dire (dier) defending there leading to a pen.

Dier defending there, leading to a pen.

Fixed it for you

international football is so boring .

Is it just me or when they make subs it’s almost like in pre season friendlies the game just drifts away.

Dier struggling a lot of the time he’s been pulled deeper to play at CB. Who knows what happens with him or if he can ever go back to that position and reach a certain high level. Stuck between two positions and he’s not ideal for either at the moment.

Just read that Keita has been tested positive to Covid-19, and felt the need to amend the thread title.

So the assumption is that he was infected on international duty ? I would normally sympathise but Liverpool is among the places in England that has the highest infection and think it much more likely that he was infected in Liverpool personally. I really think international duty for particularly advanced western european states, is less a risk than living in Liverpool right now, but maybe I am wrong. Of course, Keita plays for a less prestigious country and things may be different there. But isn’t infecton quite high in the Merseyside area anyway ?

It is a bit typical that international games are scapegoated though by club fans, but I am skeptical of this particular goat. Seems like a cheap sacrifice and I am not sure a deity would take it personally.

Anyway, we played a great game for once. 4-0 against Romania is very good and it was not at all too much. Haaland could have had 2 more in theory. It is setting up to be an actually exciting end to the Nations League, since Austria beat us previously and so is ahead in goal difference. With normal goal difference rules, we would lead the group however. But that is not so.

But man, we are really dangerous when Ødegaard finds Haaland with his cut through passes. That never ever worked against Serbia so good to see a very different team effort against Romania.