Hmm, maybe our definition of complete is different.
Salah can run, dribble, score, pass, set players up, good close control. Not sure what could be more complete. Maybe aerial ability. 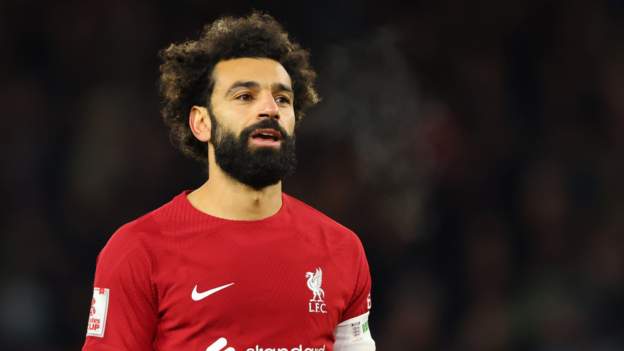 Mohamed Salah is "suffering" from being in an unsettled front three, says Liverpool boss Jurgen Klopp.

Sorry Jurgen, but i’m not having that,

Mo has been crap since Mane was crowned the king of African football at last African Nation Championship.

I think it can be both. He definitely looked tired and downhearted after the African Cup, but he started the pre-season and start of the season looking more like his usual self.
The altered tactics and unpredictable line-ups won’t be helping him.

Not sure he is still cutting inside with that favourite move of his the shot is just hitting row z instead of the net.

Wasn’t it his agent that put a thumbs up e-moji when it was announced Sadio was leaving LFC… Didn’t seem to bother him that there would be some disruption to follow for his client.
MO really does need to get back to some sort of form because his crap displays are becoming the norm and may well begin to overshadow and outnumber his once elite performances.
If Jurgen knows a disrupted front-line has an adverse effect on Mo… then maybe he would probably bench him if he had someone that could dovetail better with these disruptions then…
Some games it has been like playing with ten men when he has been so ineffectual

Mo has been crap since Mane was crowned the king of African football at last African Nation Championship.

His underlying stats were the same in the second half of the season as the first, only his finishing was off. Which makes sense given how long his season was.

It’s only been this season that he’s fallen off a lot more.

I think the point is that there isn’t anyone who could do that, and that our team always suffers from this anyway. It’s not just unique to him. We have been having problems with this over the last few seasons, it’s nothing new. Last season it was the midfield in the first half of the season, and the season before it was both the defence and the midfield, when Fabinho was shifted to plug the holes.

Well, that today from him was next level. One thing is to miss shots off target, another thing is to play badly overall. This was back to Salah from last spring.

Well, that today from him was next level. One thing is to miss shots off target, another thing is to play badly overall. This was back to Salah from last spring.

And yet he created good movement (but poor finishing) and set up some nice crossing/passing options into the danger areas in the first half. He’s no where near what form he can be, but today he was better than the last couple of matches.

Klopp keeping a forward front three doesn’t make sense to me (first Ox playing all those games on the left, then Elliot in a couple).

A front two with an extra body in midfield would help fill in the leaks, and allow Salah to be more of an inside forward. The Gakpo experiment in the middle hasn’t worked.

I thought Gapko did well today though. You could see the sense in why Klopp wanted him through the middle. He dropped off, got the ball to feet and then used the ball wisely from that position. He has looked better in that role than he has on the left, where he tends to look isolated and uninvolved. It is maybe notable that Mo had more opportunities in behind today than we’ve seen for a while and you have to think that was connected to the way Gapko dropped off and forced their defenders to track him leaving those spaces in behind for Mo to run into

I agree, it was better from Mo at least he got in those positions and I thought he helped out defensively a lot more, but he had 2 great chances and messed up.

He does need to improve his right foot though

He does need to improve his right foot though

When do you see that happening considering he’s 30? @MelissaReddy_
Messi to join Ronaldo in Saudi Arabia? Top officials there won't give up on it despite the World Cup winner's contract talks with PSG. Players "like De Bruyne and Salah will be targeted in the near future" Garry Cook as CEO of Saudi Pro League is *big* skysports.com/football/news/…
1 Like
mattyhurst 30 January 2023 11:32 #237

We’ve seen this several times before.

MLS only improved once it ditched this full scale and the Chinese league attempted it but with potentially still top talent unlike past it players.

Saying that we might still be able to get a bit for him in a years time.