Considering the team just won 7-2 as well and it was totally second string bar VVD/Fabinho for half an hour each.

What do they want?

Crazy. Fan base has became a lot more toxic this past few years. Shame.

He was poor against Lincoln - and not just against Lincoln - but I absolutely don’t understand the mindset of people giving out abuse to a teenager who happened to play poorly in a football match. Team should have done more to protect him and his surnamesake but neither Milner, nor Henderson, nor Wijnaldum were playing, he was always going to have a hard time on that side with that selection. He’ll learn to play it simple, too, but it will obviously take time, he isn’t playing in his natural role after all.

Chin up, boy. These Twitter gobshites aren’t worth a piss.

Football Twitter is a weird place. I’m not even sure why players bother with it anymore when you see how much shite and abuse gets spouted on there by 13 year olds hiding behind pictures of their favourite player. These “fans” have seen us sell Hoever for £10m and for whatever reason probably rate him higher than Neco based on evidence of what, about two cup games from last season.

I don’t think he played great last night, but the game was pretty hectic throughout. We played with a far more attacking midfield than we ever would in a league or CL game and he had very little protection on his side of the pitch. At 19 he shouldn’t really be coming in for any serious criticism off the back of that game.

Has blacked profile out his twitter after the abuse he received after the game tonight. Disgraceful from some so called ‘reds’ not the first time this has happened to one of our own

This is disheartening to say the least. I couldn’t watch the game, so can’t comment on his performance, but surely, after a convincing win, no-one needs to be abused for bad performance?

I want to believe (and hope that I’m right) that the people who gave him abuse aren’t genuine Liverpool supporters, but just random internet trolls. 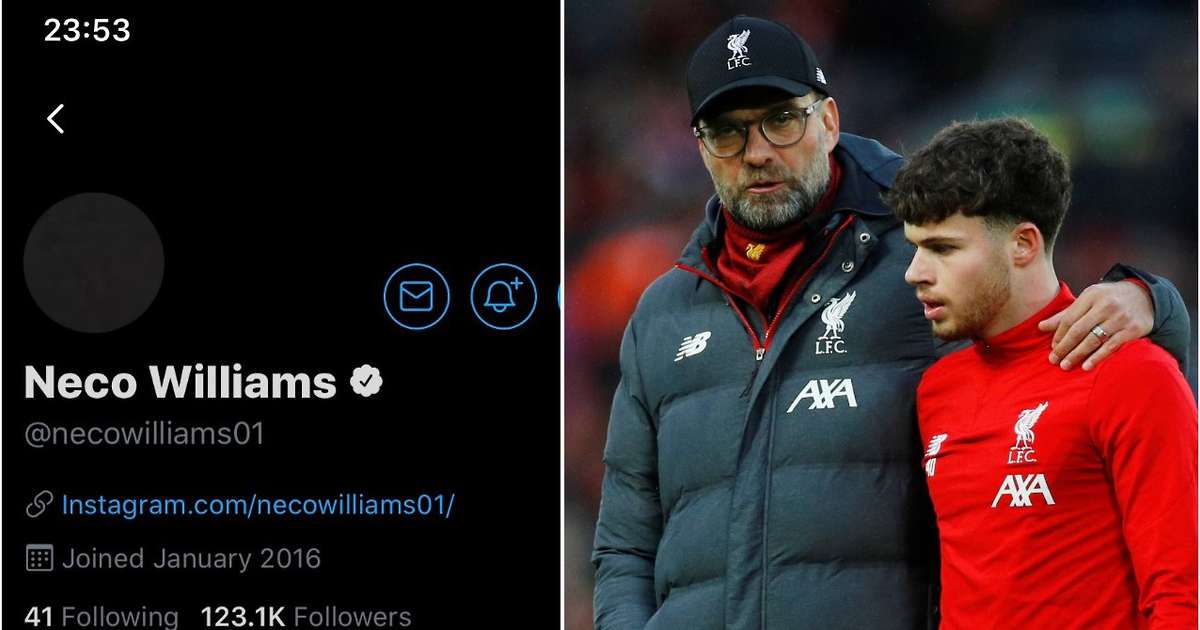 Neco Williams blacks out his social media after shocking abuse from Liverpool...

This is really deplorable behaviour by some sect that claim to be fans. We won 7-2 and this is a upcoming talent. Fucking cut him some slack. Ffs

Twitter is a cesspit for cunts unfortunately - especially football fans who are the biggest cunts.
I personally dont think he is good enough for us (at the moment, maybe ever) but lay off a kid ffs.
If I was a player id never have twitter. You could score hat trick and some will still say youre shit.

Precisely, he would better off deleting it altogether. Every sad horrible cunt feels like they can throw all the shit they want at anyone because they’re hiding behind an avatar. I mean, it happened even to Robbo, what mentally sane LFC fan would to that?

Until you have the technology to reach through your computer screen and slap a daft cunt for their comments then cowards will be cowards,i’m sure it’s being invented somewhere.

after a convincing win, no-one needs to be abused for bad performance?

Even after a resounding defeat, nobody should be abused.

Problem with Twitter is anyone can say they’re anything. I could set up an account as a Chelsea fan and hurl abuse at Lampard and their players but I wouldn’t because that’s not how I get my kicks. Nobody I’ve seen on Twitter (a broad spectrum of Liverpool fans with various opinions) was doing anything of the sort so it’s probably mostly recent “fans” which means casual fans, immature kids with too much time on their hands and full time trolls who get their kicks that way. A lot of them won’t really have any affinity to Liverpool yet/ever and some of them may blatantly be taking the piss on purpose.

I did watch the game last night, and I’m at a loss to tell you what Neco did wrong. There were worse performances than his. He was OK.

Chin up, boy. These Twitter gobshites aren’t worth a piss.

. We stand by our lads through thick and thin.

The guy is also still 19 years of age, there is an expectation by some on here even that they are the finished product when at that age they are still coming into the period when they should start to show some signs of it.

His performance in some games has been erratic (community shield) but even then the likes of Gomez have been.

At 19 can the player play to a reasonable level in his chosen position, yes, then he is good enough, as I said I didn’t see it unlike yourself but we won 7-2 and having seen the goals I’m not sure what the issue is.

Young players like Neco shouldn’t have twitter accounts. The abuse is totally out of order and reflects the entitlement some ‘fans’ are clearly starting to feel since we became the best team in the world.

I have a few reservations about him and think we may have backed the wrong horse in selling Hoever, but I’m only right some times and Klopp is right all the time. Hopefully he’ll prove me wrong again.

It’s sheer madness that he has to take these abuses. But I hope Klopp, Henderson, Milner and others will take this situation to toughen up the kid.

Just been reading about the abuse he was supjected too after the game last night, and that is fucking discusting.

As Jonesy said, they need to develop the technology to reach through your computer screen to slap daft cunts

This is really deplorable behaviour by some sect that claim to be fans. We won 7-2 and this is a upcoming talent. Fucking cut him some slack. Ffs

Yeah, the abuse is bang out of order. It may be true that he’s not ready to start in the Prem but he’s 19, TAA and Jones aside most kids aren’t ready to come in and perform in League games. Don’t understand why people can’t make that distinction. And I have a lot more patience for a 19-year-old making mistakes in unimportant games (I’d classify the CS as unimportant, any trophy that was formerly shared is unimportant!) vs. chuckleheads like Mignolet, Degsy, Moreno, Skrtel, etc. who made the same mistakes week after week in League games and still got picked.

Either way, this all just underlines that Football Twitter is a cesspool and should be avoided at all costs (even though, realistically, I myself don’t adhere to that directive).