Well fought match. Milner my motm. Tsimikas played well as Konate. 3-0 is best we can ask.
Congratulations toMane for his 100 goal.

Pretty flat but that’s how champions are made

Hopefully Thaigo is only out for a week or so. Can’t be having another injury season surely!?!

Even considering the one where he was almost caught out (but then recovered well), Alisson demonstrated why he’s the best in the world.

Great match from the boys, terrific game for Mane, and he looked very good today. The team had to weather the storm in certain stretches of the game, but overall he had total control. Once Mo put the second one in, the 3pts was sealed.
I thought Konate played really well. Looked really assured 1v1 and probably saved a few goals with his quickness in his recovery run. A few dodgy moments at the beginning of the game with VVD but otherwise put in a really good shift. Milly need really well covering for TAA and in general kept Zaha quiet. Also, Tsimakas played extremely well too, quite impressed with his crossing ability and his delivery of the ball.
Overall great game, and it was awesome seeing the crowds at A field cheering on the boys.

Time to play the squad players for the league cup mid-week.

I wouldn’t say it was flat. It wasn’t a vintage display but we were better side.

Ah yes, Ibou looked good. Was looking forward to him getting his first run-out. Great first performance and will only get better with the best coaching staff, goalkeeper and center back in the world next to him.

If people are making Allison man of the match, then maybe the scoreline is a little bit flattering. Three good goals though. 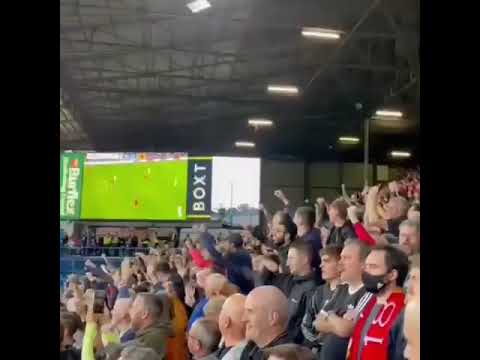 Three set pieces 3 goals, given all the changes we made , we did ok, take the 3 points especially after our week in Europe.

Im happy for Naby with his goal, and Mane for all the stick and criticism i have given him he does like scoring against Palace so great time to score his 100th prem goal.

Felt like we played Russian roulette for large periods but when we were on top, we were really showing the gulf in class. There was some fatigue setting in especially in the second half but all is well that ends well.

Shaky from Konate, Van Dijk not at his best but contributed to the goals, Tsimikas had a very nice afternoon as did Henderson and Milner. Salah is a machine and I wish Mane played Palace every week. Best performer though was Alisson. We don’t walk away with 3 points without him. Thiago was pretty good as well so the sight of him hobbling down the tunner was not a pleasant one.

If people are making Allison man of the match, then maybe the scoreline is a little bit flattering. Three good goals though.

Hear hear on all accounts. But goalkeepers like that are what win you titles — or, in our case, even if he misses the first 1/4 of the season

(not asking for a repeat).

Scoreline flatters us I think.

Was a bit of a disjointed/sloppy performance at times and credit to Palace they where in the game until Salah scored but take the 3 points and move on. Have played better and lost before and played worse and won so don’t want to read too much into the performance not at our best but good enough to grab the points with a few players rested.

Shame about Thiago thought he was good and was coming into decent form. Back to square one now for him hopefully its not too serious.

Another great all round team performance. Special mention to Milly who I thought played his heart out against one of the leagues best wingers. Midfield excellent apart from a couple of mistakes from Fabinho who lost the ball in the middle of the park but nothing came of it. Diogo has worked hard in the last couple of games but things not happening for him at the moment. Last but not least was the performance of our keeper who I gave my MOM. Cool,calm and brave making some great saves and his anticipation brilliant today.

The keita goal was brilliant

Shaky at the back today, perhaps not unexpected given Virgil was the only starter in the back 4, and Konate a bit nervy on his debut.

Alisson man of the match. Without him we’d probably have conceded at least 2.

Good going forward, which has been a consistent feature so far this season. All of the front 3 should’ve scored, if not for Jota blazing over from a yard out.

Henderson tireless as ever, though surprised out midfield wasn’t more dominant. Credit to Gallagher for Palace on that, think he was excellent for the opposition.

Thought Milner did a good job on Zaha. Really not a fan of that #%&*

Salah MotM for me, this is really our most important player.

Not good yet 3 points in the bag.

Was a bit of a disjointed/sloppy performance at times and credit to Palace they where in the game until Salah scored but take the 3 points and move on. Have played better and lost before and played worse and won so don’t want to read too much into the performance not at our best but good enough to grab the points with a few players rested.

In a vacuum, I don’t disagree. But we play such a team game, and in those moments of confusion, disarray or mistakes, our boys have enough individual quality to overcome.

IMO this was a fantastic team win.

Jota is ice cold. Painfully ice cold. He’s putting the work in, but couldn’t hit the ocean from a boat.

Naby. Thrilled for him. The expressions on everyone’s faces was priceless!

Konate. I thought was fantastic overall, so excited to watch him grow at our club. He made 2 mistakes but has the physical ability to overcome.

Mo. I have a message for FSG: blank check.

Sadio. Really happy for him. I thought played a great match.

Don’t want to hear any complaints about it not being a good performance when City dropped points and we went top.

Although the score did flatter us a bit, I thought we fought well playing an in-form team. This was what we missed last season. May it continue.
On a side note, in 6 matches to-date this season, our midfielders have contributed a fair bit of goals. An additional weapon for us.