Wow thats pretty out there but is most certainly needed.

Ironically City were the other day trying to abolish the rules stopping B teams playing in the lower divisions. I think they will be against this.

Full breakdown of how new proposals will shape finances, infrastructure and governance

A greater emphasis will be placed on merit in both the Premier League and the Championship with half of payments reflecting positions over the past four years.

For all above options:

i) the election or removal of the CEO and/or a member of the board;

iii) contracts for the sale of league broadcasting and media rights

i) change the distribution rights of the sponsorship, commercial and broadcasting rights sold

c) alter in a material way the nature of the competition

Full breakdown of how new proposals will shape finances, infrastructure and governance

If I read this correctly, this can essentially be boiled down to the PL giving away a bit more of its money so that Liverpool, Utd, and Arsenal can have more say in how the PL is structured. Is this essentially them calculating that the money they lose in the give away can be earned back in increased CL revenue, and they need to make room in the domestic schedule for that?

I think removing the League cup is a long time overdue, most pointless cup around… Or leave it and have the Premiershop clubs excluded.

Some sensible stuff here but not sure why they have specified decision making be reserved to the ‘longest serving 9’ logic - would be very interested if anyone can venture some ideas about why that particular grouping (beyond the expected ‘big 6’) is proposed?

Some sensible stuff here but not sure why they have specified decision making be reserved to the ‘longest serving 9’ logic - would be very interested if anyone can venture some ideas about why that particular grouping (beyond the expected ‘big 6’) is proposed?

Because the majority the big 6 hold within that group still allows the big 6 to act a cabal and dictate to the rest of the league. It makes it appear more democratic while giving them all the same power as if they presented it the way you do.

Hmm perhaps but I wondered if, Man Citeh say, are more likely to be able to push through/stifle FFP type rules if they need to get 6/9 when 3 of those are perhaps more easily influenced? As opposed to say 4/6 where they would need to convince at least 2 of the other ‘big 5’ to agree to a proposal to scupper FFP (cf just 3 smaller clubs with themselves to scupper a FFP type change against the other ‘big 5’)??

Sorry never saw BB legalalien, can you explain the character & reference to the dunce?

NEW | Premier League blasts ‘Project Big Picture’, saying “a number of the individual proposals in the plan published today could have a damaging impact on the whole game and we are disappointed to see that Rick Parry, Chair of the EFL, has given his on-the-record support” https://t.co/NuxkxvXvgw 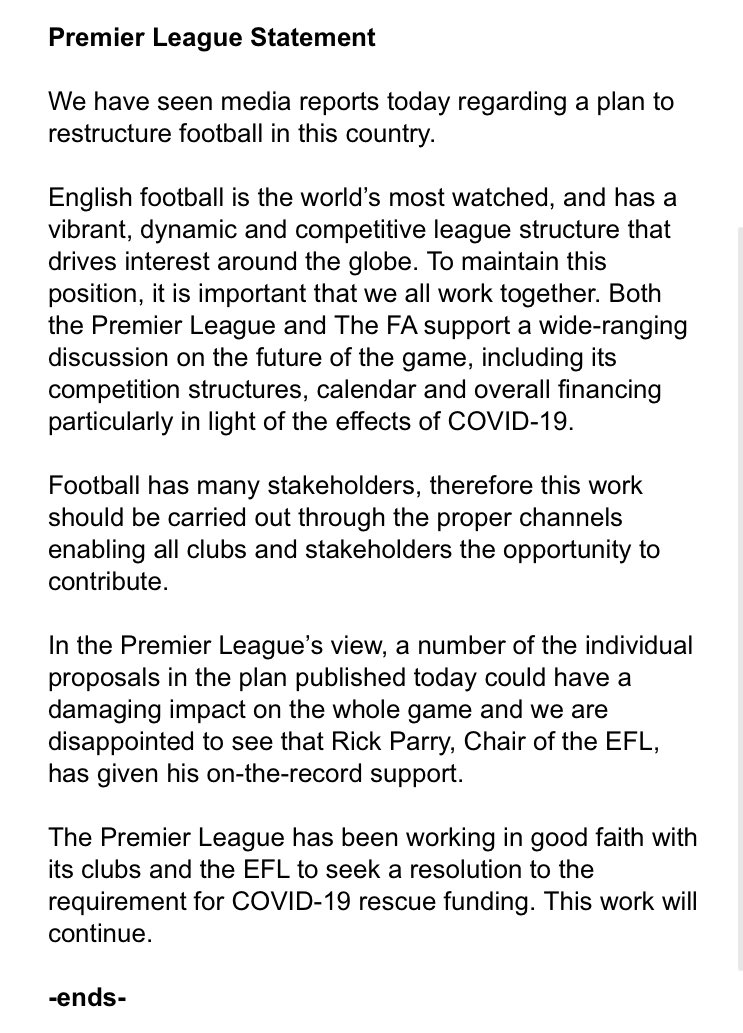 I agree with a good number of proposals But I could see how this could make a non-‘big 6’ fan’s blood boil.

At least we can’t be mocked any more for acting all Billy Big Bollocks having won nothing. Good year to do it.

Parts I can see making sense, especially scrapping the League Cup and EFL cup - both are pointless and have out lived their usefullness.

Reducing the Premier League to 18 teams has some logic, but never really given it much consideration so not prepared to offer any opinion yet as I am not etirely sure.

Protected status for the top 6 and the change in voting rule sound like a load of utter bollocks. If they are going to offer protected status, surely Newcastle and Villa who are both more regular Premier League teams should be offered it before Citeh? But I would rather not see any sort of protected status at all. If you fuck up your planning and aren’t good enough to beat relegation, then you deserve to go down.

Personally, I would like to see the top clubs being able to end their U/23 teams in the lower leagues - starting at the bottom and making them earn their spots through promotions upto Championship level.

Away fans ticket prices to be capped at £20,with an 8% allocation of tickets to away fans.

Unless i missed it,I didn’t read anything on home game ticket prices,just the away ones.

I can’t find anything official about what the exact matchday % of ticket allocations is for away fans in the premiership,if it is 10% then it’s not set in stone cos it max’s out at 3,000 away fans regardless of stadium’s with a larger capacity or we’d get 7,500 tickets for Old Trafford,6k at Arsenal and Spurs.I know the FA Cup is 15%.

I think the changes to the pyramid structure make sense. Fewer games in the PL due to Europe obligations, and more game in the lower leagues to increase competitiveness, benefit loan players and encourage managers to experiment. And hence the League Cup should be abolished or turned into a cup for the lower leagues exclusively. Community Shield, fine, a summer friendly tournament for the winners of each league, but a mandatory tournament solely for cash grab in places far far away is just too much.

Then the Big 6 + 3 governing rule, probably just to get the backing of the likes like Man City and Chelsea. Just incentives for rich clubs to be rich, and for those two clubs to break the transfer market every year (while preventing others to do the same). The rules for clubs to stream 8 own matches will also upset all clubs outside the Big 6 (or actually, the Big 4. Who watches Tottenham, and who spends so much money to watch Man City online?).

All in all, fans will scream and this plan will still go brrrr

To be honest I don’t really see the point of reducing it to 18 if you are axing other parts of it. Never much got the clamour because other than Germany every other top league is 20 clubs. Not every team plays in Europe only around 7 or just over a 3rd of the current lot.

Not too bothered about the 3rd spot being a playoff but rather it not.

Funding for the lower leagues is all useful mind.

A later start I do approve of so it fits in line with Italy.

Germany’s winter break goes on forever and we get annoyed when the international breaks happen so wouldn’t fancy an 4 week break in the the middle of our season, and no doubt we would come back shite.

Keep it at 20 and review the rest, also if your taking it down to 34 not sure you don’t just televise every game. Even if some are via club channels. Effectively you could have 1,5 and 8 on Saturday, 12,2,4 and 7 on Sunday and 1 on Friday/Monday.

I’ve heard that proposal before somewhere, but it’s should really be on the table. It would be massive for clubs and save them (and fans) an absolute fortune in travel.

Plan to mend football pyramid's great crack should not be swept off table |...

Liverpool and Manchester United have infuriated the Premier League, which was kept in the dark, but the premise of their proposal to reunite with the EFL is sound

With regards to scrapping the league cup,
I can’t see man city voting for that.