Religion in all its Forms

I don’t, the point being it’s only unidentified to you, the person who built it and those who refuel it/fly it etc know exactly what it is

Didn’t know I was in the company of the world’s greatest visual acuitist. Thought this was a Liverpool forum not the telescopic eye fraternity. You’d obviously have been able to identify a white light in the sky like a big star at an un-measurable distance doing odd things. I prostrate myself in the presence of the person who will obviously never need to lower themselves to Specsavers. Wow.

But I didn’t and I don’t. It’s unidentified from my frame of reference.

Red was just joking, don’t think there was anything sarcastic aimed at you.

Think I stated this as well☺️

I think you’ll find that this is a recurring theme…

@odin_telamon not so sure, this was his first dig. If it’s meant in jest, fine.

Had a fabulous day yesterday at Speakers Corner. Prob my favourite thing to do in the world with my clothes on. Got one guy to stand down as he was actually suggesting that he had a terrible life as his 3 (healthy) children were a living nightmare to look after.

Had a deep and involved conversation with a born again Christian and a Muslim. That was weird as the Muslim pulled Christianity down on facts and reason and then when I used the same strategy on him (not the best idea but did it to prove a point) he flatly refused to accept the logic of his own reasoning. Can’t question your own faith then? He did give me a copy of the Quaran and I’ve promised to read it, which I will but it seems to make the Silmarillion look like an easy read.

Met a barrister who would not use any kind of reason to asses his faith which was terrifying. I asked him if Allah descended from the Sky into the middle of Hyde Park now, in full view and sight and proclaimed his name and that Muslims are right, would he stop believing in Jesus? No was the response. He’s a barrister.

Interestingly, about 98% of the audience were men and none of the speakers were women.

The crowning joy was the very shouty christian. He’s been there every year I’ve been there, rarely pauses for breath. I did get one question in to him which he heard and after a bit of back and forth he went back to ranting. Came over and found me later, shook my hand and said “That was a good question, you threw me” Ah, high praise. However he was replaced by Pastor Steve who let’s say took to me. For about 20 mins he shouted at us, called us sinners and he and I ended up Kneeling infront of each other where I think he tried to pull down the power of the holy spirit and possibly baptise me. But you see I wouldn’t proclaim Jesus as my saviour (why would I?) and so it was all my fault that I didn’t believe and I was going to hell. We had a heated debate, let’s say the audience was on my side. Had a good chat with him afterwards, we parted as friends. Brilliant day.

One very interesting thing happened as the day went on. It went from 4-5 mr crazy vax deniers and JBP’s biggest fan talking about how men are doomed plus the Christian zealots to serious Islamic debates with LOTS of cameras and heated words. I found the guy I’d met earlier and asked him what all the debate was about (debate not in English), he just shrugged and said interpretation. I asked him if a perfect god wrote a perfect book, how’s it possible to interpret as it must just tell us what to do? He started quoting it to me but obviously never answered the question. People who shout and rant at Speakers Corner tend no to.

Do go. But don’t be drinking any alcohol, the crazy lady with the ripped bible will shout at you

Do go. But don’t be drinking any alcohol, the crazy lady with the ripped bible will shout at you

We had someone similar for years on O Connell street in Dublin.Mad Mary or Mad Maggie(you never stopped to ask her name) is how she was known by everyone. 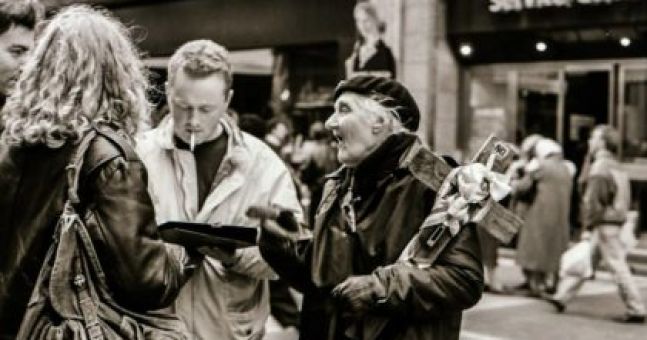 The Enchanting Story Behind Dublin Characters: Maggie With The Crucifix

"BRIDES OF SATAN! BRIDES OF SATAN!" This was famously shouted by 'Maggie with the Crucifix' at a group of passing nuns back in the 1980s. The startled nuns ran down O'Connell Street with their gowns and habits billowing in the wind – and Maggie ran...

Had a fabulous day yesterday at Speakers Corner. Prob my favourite thing to do in the world with my clothes on.

But don’t be drinking any alcohol, the crazy lady with the ripped bible will shout at you

ahhh yes, the old lady outside the Milan Cathedral waving a bible at my wife, my son (7mo) and myself as we walked by… yelling at us in Italian. good memories.

Being a humanist ‘impossible’ in Qatar

The World Cup has laid Qatar’s atrocious human rights record before the world, and has made it plain to all just how theocratic regimes threaten the expression of humanist values – free expression, equality, human rights, democracy. Qatar is one of...