Seasons come and go but each season brings a new chapter with new memories, some cherished, some never to be forgotten…

There is a timeless saying ‘A picture paints a thousand words.’…

I don’t just want a thousand words, I want to hear your reactions, memories, tales or stories captured in each single image - whether it’s 10, 100 or 1000 words… Say what you see… Tell us your memories of the story behind the photo, the people in the photo, the places… Your Memories…

To get us underway, the first photo will take us back to the year 2000… 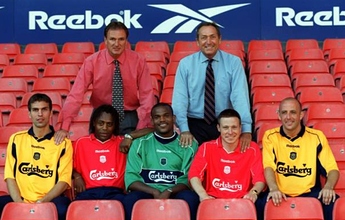 Say what you see…

The first thing I see is Gary Mcallister and it takes me back to when I was was a poor broke student. One who loved football and music.

This was back in the days before YouTube and when to download a song, you could use Napster but it would take 45 minutes to download one song, and NTL would cut you off after 2 hours of being connected to the internet. CDs were at the height of popularity as the first iPod had not been released.

As I was frequently buying CDs but having to return them as I was broke (once bought an album using pennies, I had won from penny poker), I didn’t like to give my name for fear that Virgin would think I was abusing their returns policy.

Me and my mate (a football mad Burnely fan) started a game of one upmanship. Each time we returned a CD we would use a famous footballers name. It started off me stating I was Gary Mcallister. Which was quite believable as a skinny white kid. He took it up a level by stating he is Dennis Bergkamp. This went back and forth. Roberto Baggio, Gianfranco Zola, Celestine Babayaro each time getting more daft.

One day they the sales guy recognised me. He looked at me with a smile. He asked me my name and I said Tony Yeboah. He asked me for my address. I gave him Elland road. To which he said, you cheeky fucker your not Tony Yeboah, nor are you Socrates or Zola. No more returning CDs.

The funny thing is I still have that crappy Wheatus CD.

I’m still waiting for my first grandchild and when they arrive I’m not sure how interested they will be in LFC minutiae, but just on the off chance they are I would say this.

Standing at the back are Phil Thompson (Thommo, LFC legend from the all-conquering 70s and early 80s), assistant manager and Gerard Houllier, manager. I didn’t have much faith in this partnership when it was first announced but they proved me wrong and took us on a trophy spree in this season.

In front are a selection of some of the pre-season signings. Back then we used to buy a lot of players and probably had about a 1 in 3 hit rate. On the left is Markus Babbel, a genuine ‘big name’ signing we got from Bayern on a Bosman. Next to him is Bernard Diomede. I had high hopes for him. I remember him as having scored on his debut for us with an overhead kick, but I’ve just looked it up and it was disallowed, apparently. Anyway, he didn’t last long. I think that’s Pegguy Arphexad (?), back up goalie. Then Nicky Barmby, bought from Everton, and finally Gary Mac, passmaster supreme, all-round good guy and scorer of one of the most iconic Merseyside Derby goals ever. A 40 yard free kick to win in the last seconds of the game later in this very season.

When I see this photo I see hope and expectation. Houllier had steadied the ship after the ‘Spice Boys’ era and I remember really looking forward to this season. It ended up being the year we won our very own ‘treble’ and qualified for that new-fangled Champions League thing for the first time.

We had a fair amount of luck in all 3 finals. Beat Birmingham City on penalties to win the League Cup. Then absolutely mugged Arsenal to win the FA Cup 2-1 after Stephane Henchoz had twice blatantly handled the ball to stop goal bound efforts going in. Thank god there was no VAR back then. It was a very hot sunny day and my son, who was 3 years old, and a few of his little pals were playing in the back garden. I had the patio doors open and had been completely silent throughout the entire game because we were being so outplayed. When Owen equalised I let out a scream so loud that all the kids in the garden stopped playing, looked at each other in terror, then burst out crying. Good job the patio door got shut after that because I was fucking delirious when he scored the winner 5 minutes later. Think some items of furniture may have been damaged in the aftermath so I was definitely in the dog house that night.

The UEFA final against Alaves was even more dramatic. Won it 5-4 with an own goal, a ‘golden goal’. At last we were winning things again. It was a really good, fun season that we needed after the drudgery of most of the 90s and will always be one of my favorites.

10 years is far to long for a team like Liverpool not to win the league,these are the the lads to bring us number 19!

Such an eclectic mix of signings. Babbel reminded us that we were a big club with a pull that could compete with some of the best on the continent. Diomede arrived as a World Cup winner but never looked like one. I think he scored a bicycle kick on his debut or early on in the season that was then ruled out. Could have been a sliding doors moment for his Liverpool career, much like Downing hitting the bar after a mazy run on his debut a few years later. If both had gone in would those players feel like they hit the ground running and given an early injection of confidence perhaps?

Arphaxad was just a back up keeper but we took him off Leicester. Growing up in Leicester it was always good to see us take players off them to rub mates noses in it. I remember loving taking Barmby off Everton and thinking that showed we were going to be ruthless and not let tradition or rivalry stand in our way of getting the players the manager wanted.

And then there’s Gary Mac. 35 at the time I think. I distinctly remember sitting in the cafeteria at college and mates mocking the signing and me trying to justify it even though I thought it was a dumb transfer. It may have been the pre-social media age but that didn’t mean you didn’t defend your club and players even if you didn’t agree with what they were doing.

The season can be summed up with three goals. Fowler’s in the league cup final, watched with some friends in a pub that was actually a boat. Owen’s second in the FA Cup final watched at home. This goal, the Gazza one against Scotland in Euro 96 and THAT Roberto Carlos freekick are the only three goals I ever heard my dad audibly react to. He wasn’t a big football fan and kept an eye on Newcastle results but he knew genius when he saw it.

And the there was the golden goal against Alaves. I’d never even heard of them before the final. Golden goal was this new concept that I can only recall one other game being decided by. Again, I watched it at home but this time in my room.

I physically lept for joy off my bed when that went in, hitting my head on the sloped ceiling of my room, landing in a crumpled heap on the floor. Next thing I know the door flies open and my dad is telling me the next shout, bang on the floor or noise I make he’s taking the telly out my room. I suppose it was at least the ninth time he’d heard cheering or swearing after a goal that evening. Luckily, it was game over at that point and the man who’s cross had been headed in by their defender was none other than old man McAllister’s. Enjoyed pointing that out at college the next day.

A bicycle kick by Fowler on the last day contributed to a 4-0 win at Charlton I think it was and that meant a new adventure in the Champions League the next season. Surely a league title would be on the cards soon.

Arphaxad was just a back up keeper but we took him off Leicester. Growing up in Leicester it was always good to see us take players off them to rub mates noses in it.

Pegguy Arphexad… The Lad who could never move up the Pegg-ing order at Liverpool!!! I still remember the days of Ceefax on BBC, page 302, summer 2000… “Liverpool swoop for Pegguy Arphexad”. Well it definitely raised an eyebrow or two…

With Tim Flowers ahead of him in the pecking order at Leicester, he was a player I didn’t really know much about back then… He had a decent few games for Leicester especially in one of their FA Cup round matches against Arsenal saving those penalties from Lee Dixon and Gilles Grimandi as Leicester progressed in the Cup. He had also just denied Liverpool a crucial three points in May 2000 when Leicester beat Liverpool 2-0 at Anfield.

So I suppose he came to Anfield with a bit of a reputation as a decent shot stopper and as cover for Sander Westerveld especially with Brad Friedel coming to the end of his contract, but his signing didn’t really inspire any confidence for me. Still, at the end of the day, he made 6 first team appearances for Liverpool and left with 6 winners medals.

Wasn’t that the lad who kept making stupid jokes during a ceremony for the 96? I remember being furious about that at the time.

Nope, that was Itandje (Rafa signing).

Nope, that was Itandje (Rafa signing).

39 senior club career appearances. Just 23 of those in the English top flight over 6 years.

Not a bad set of medals for all that time on the bench.