I found this very interesting since the Polish army is one of NATO’s larger armies. The results are…depressing if anywhere near accurate (and I have no reason to believe that they are not. Poland simulated that their own army would cease to exist after 5 days and that Warzawa would be surrounded in 4 days. In that time, unlikely NATO would even have responded.
Here is the original Polish article sent through Google Translate:

Here are the thoughts of one military/security analyst: 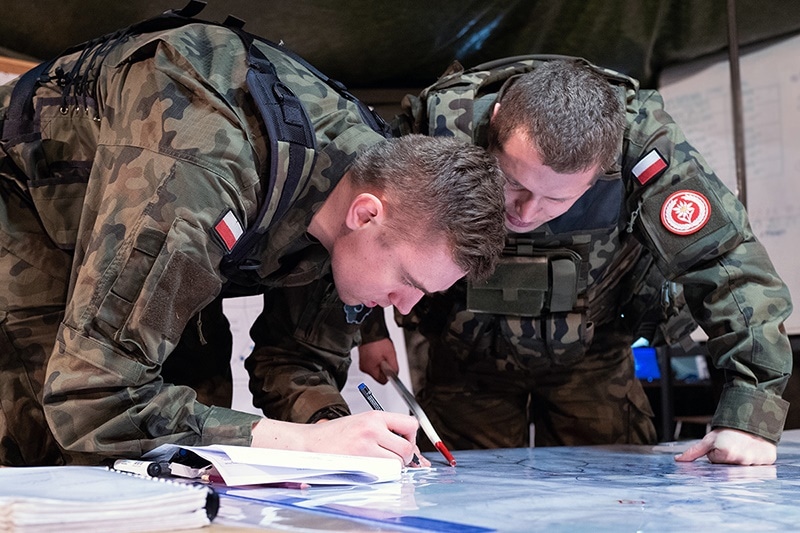 Russia has intrinsic element of surprise. Assuming that a) NATO intel (remote sensing, SIGINT etc) has picked up on a degree of preparations; b) some degree of Russian field exerices are planned as cover; and c) Poland-NATO/US alert level is raised a notch. 2/

Nevertheless, a sudden switch to offensive mode will be a shock. Institutional inertia both in Poland and across NATO gives Russia a vital 96-hour (4 days) window to cross the border and seize/hold strategic locations & overwhelm defensive units before they can be reinforced. 3/

Regardless of the units involved, their combat strengths and different states of readiness, Russian forces would have surprise & momentum. Polish/NATO forces would have inertia & delays in political decision-making, constraining reaction times & degrees of freedom to operate. 5/

Any hypothetical Russian offensive against Poland must factor in the Baltic States, Kaliningrad, Belarus, Article 5 and support via Germany, Czechia, Slovakia etc. However, NATO response calculus assumes "30 battalions, 30 days". By which time, eastern Poland is occupied. 6/

So many variables. So many risks (to Russia). Russia could expect to occupy territory with a hostile Polish population, requiring large numbers of Russian National Guard troops to suppress resistance. Would it be worth it? The Baltic States or Ukraine maybe (⬆️ probability). 7/

.. 2) the threat of "de-escalation" or Russia's doctrine of resorting to a limited nuclear strike against opposing forces using tactical (battlefield) systems such as Iskander-M or air-launched cruise missiles - to be used if Russian forces start to lose on the battlefield. 9/

I assume "several thousand" Polish officers involved in the weeks of "Zima-20" exercises factored in "de-escalation"? Because if Russia ever did invade Poland (or Baltic States) it would be under a "nuclear umbrella" threat. How would NATO/US/EU politicians cope with that? 10/

👆 This is one train of thought. In conclusion: defence planning must consider all possibilities and assign probabilities. "Zima-20" has done both Poland and NATO a favour. The loss of Georgian (2008) and Ukrainian (2014) territories shows that Russia means business. End/
Magnus 4 February 2021 00:06 #2

Forces arrayed against Poland would be the impressive and massive Western Military District: 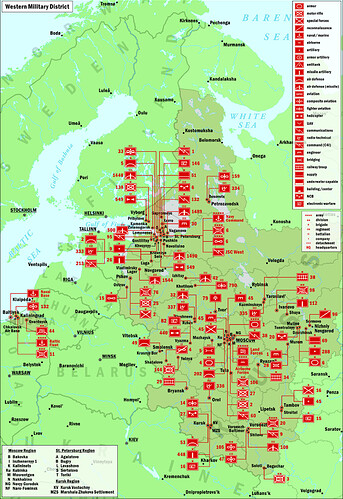 Short amateur analysis from me:

European countries are likely fucked if Russia launched a large assault under cover of some military exercise or the like and with current NATO forces, unlikely to be stopped and pushed back without use of nukes. This obviously includes my own country.
I doubt Russia has enough troops to push (and occupy taken territories as they push on) and hold Germany without massive use of reservists, but they could wreck Germany completely and totally without actually holding the ground, using massive kinetic strikes. I.e. If they wanted to hold Ukraine and Poland they could, while they could destroy bases in Germany and destroy Germany’s ability to join the war. This is without nukes. With limited use of nukes, no one knows, but Russia has all the advantages concerning use of tactical nuclear weapons due to geography.
Apart from Germany, only France and the UK has armed forces of any very relevant size, and it would take weeks for them to join battle in significant numbers.

So I fear Russia could take Ukraine and Poland, some other smaller countries, then threaten nuclear escalation, and thus maybe get away with it without a massive World War 3. If NATO has not responded in time to protect Polish territory, which they likely won’t due to the problems Schollich points to, I don’t see how a conventional push back war would succeed in liberating Poland if Russia has free reign of 74 hours. Personally, I had maybe thought that Poland could survive for longer than 5 days. 5 days much too short and incredibly depressing.

For me its not Poland that should have greatest fear but the baltic nations and Georgia. They hold little international standing and they are easy targets. In the eyes of say many they will be perceived as former Soviet Union nations. The international backlash will be akin to Russia with the Ukraine.

Poland is different. They are a major nation with internationsl standing and ties. If Poland was attacked, I believe the US and the UK would intervene immediately (not wait for NATO). The US I believe has quite a large military presence in Poland, and the UK could quickly react with air support.

My guess though is Putin is not in power in 5 years time. Be it health or political. That could massively change the risk landscape. Both positively or negatively.

Surely the problem with these sorts of simulations is that they cannot simulate a response that factors in top secret intelligence? I would be very surprised if Russia could instigate such a manoeuvre without NATO having a degree of advanced knowledge.

All the ex-Warsaw Pact countries neglected modernizing their defense capabilities since joining NATO. For example, all/most of them still use Soviet era air-defense systems (SAM) although those are inadequate against even 3+/4 generation combat aircrafts.

I think the focus of Russia’s strategic thinking is Caucasus, Central Asia and Mediterranean region. Estonia is a funny case. It has a large Russian population and a thriving far-right tendency.

Romania and Poland (I think?) are part of the Aegis Missile (Ashore) Defence network though…I think they have SPY-1 radars and Standard Missile-3s. Not sure whether they are capable of taking out Russian planes or missiles though? If you were a defence contractor, why would you buy anything that included the word “Standard”?!