US Teams and MLS

Starting a thread here to talk about all things US football.

The Athletic broke a story yesterday that Gio’s attitude during this world cup absolutely stunk, leading to multiple interventions from players and the coaches, debates over whether to send him home and finally him standing up in front of the team to acknowledge he was being prick. Berhalter appears to have confirmed these stories with off the records comments that have been reported on as on the record.

This seems to explain his lack of involvement, which I think puts some of the tactical criticisms of Berhalter (including from me) in a different light.

Paywalled article - Gio Reyna apologized to USMNT during World Cup for his lack of effort, sources say - The Athletic

I think the poor attitude came from Gregg telling Gio he wouldn’t be heavily involved in world cup… after a couple days Gio got his head screwed back on straight.

Not great from Gio… but why not involved in the first place? And how the hell did this leak out? (It came from Gregg telling someone off the record… but then didn’t stay that way). I’d still shit can Gregg and get someone else. Nobody covered in glory with this, and Gregg to blame for spilling beans to media. Self inflicted wound.

And how the hell did this leak out?

What I read is that Berhalter’s comments were in response to explicit questions about the reporting in the Athletic. Given most assume the leak came from his camp to serve his/their interests I don’t know it changes much, but it is possibly relevant context.

Regardless of the truth of it, it reflects awfully on Gio. It’s one thing to fall out with the manager. It’s another to conduct yourself in such a way that team mates call you out. You can be disappointed to not play, but to actively negatively impact the rest of your squad is not something I think someone gets a pass on. Acting like he is the wronged party for THIS is think is a terrible look. As I said in the WC, I think the thread that needs to be pulled is his comment about being told ahead of time that he wasnt going to feature too much. Berhalter’s public reasons so far have positioned it as if his hands were tied because of a lack of fitness, which to be fair is what a manager might say who wanted to protect a malcontent. But I think now Gio has responded by putting his side out there Berhalter needs to respond again and needs to address that for anyone to have faith in him moving forward.

I thought his comments were to some leadership group off the record, which then published in a newsletter and set everything off- including the report in the athletic.

But agree on how bad it is for Gio. Just question why Weah would be involved over Gio (before the attitude problem…) gio is a much better player.

Right on time, @Limiescouse, with this thread because according to ESPN we are a “major eliminated nation.”

As for Gio, he hardly set the pitch on fire when he did get some minutes. U.S. coaches should have kept mouths shut, though. Bad form however it got out. What happens at fight club… 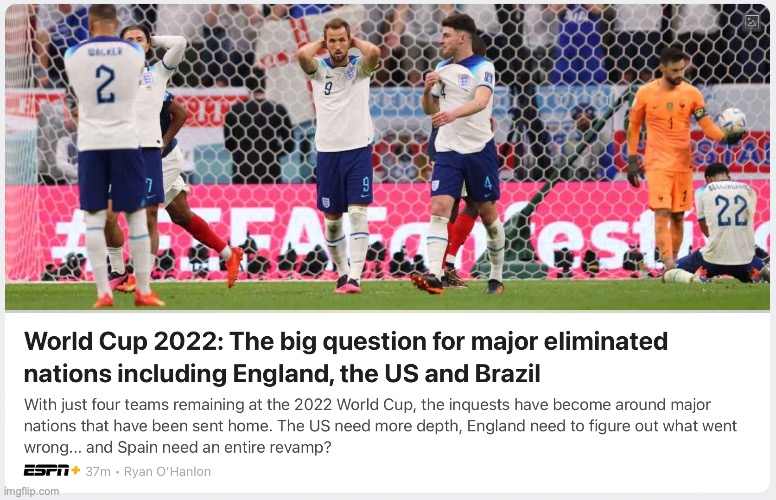 I thought his comments were to some leadership group off the record, which then published in a newsletter and set everything off- including the report in the athletic.

Athletic reported it as multiple sources close to the camp who were talking off the record. The Athletic report on Berhalter’s comments separately, which at least implicitly suggest the source for their story was not him. But it also suggests Berhalter freely offered up his comments about the unnamed player rather than responding to questions. On reflection I think that reflects even more poorly on him as just a clear unforced error

Wild shit going on with Berhalter. His contract technically expired at the end of the year, but the USSF being really non-committal about whether he was goign to be retained or if they were going to move on.

Today Berhalter himself came forward with a claim that he was being blackmailed by someone threatening to leak information about him that would end his association with the USSF. To get in front of that he has disclosed that the information is likely that while a freshman in college at University of North Carolina, 31 years ago, he and his now wife, a player on the women’s team, got into a physical altercation outside a bar.

Separately the USSF have made a statement that they were informed of this incident just before christmas and launched an investigation into it. That has revealed evidence of “inappropriate behavior towards multiple members of our staff by individuals outside our organization.” With the investigation on going they’re going to hold off making any further comment about any of it, but will announce who will lead the team in the Jan get together in the next few days

It’s probably worth pointing out that Gio’s mum was a player on the women’s team at the same time as Berhalter and his wife.

I read that statement like 5 times and couldn’t figure out what inappropriate behavior towards staff from people outside the organization would have anything to do with an internal investigation on what happened 31 years ago.

Im guessing it means they found out the blackmailer had also gone to people in the USSF directly to apply pressure to remove Berhalter. Most like Berhalter’s brother, who is the #2 guy in the organization. The USSF are claiming this was the first they heard of the information and so the insinuation is Jay allowed this to not be disclosed when hiring him, and could now be smeared by the release of the info.

Truly sick of this desperate mining of the past.

It’s probably worth pointing out that Gio’s mum was a player on the women’s team at the same time as Berhalter and his wife.

You nailed it. Claudio sabotage, maybe we are catching up to the rest of the world

From the Athletic, (Gio Reyna’s mother reported incident involving Gregg Berhalter and wife to US Soccer - The Athletic) Gio’s mother:

*Danielle Reyna was a roommate and soccer teammate of Rosalind Berhalter at UNC. *

“To set the record straight, I did call (U.S. Soccer sporting director) Earnie Stewart on December 11, just after the news broke that Gregg had made negative statements about my son Gio at a leadership conference,” Danielle Reyna said in a statement. “I have known Earnie for years and consider him to be a close friend. I wanted to let him know that I was absolutely outraged and devasted that Gio had been put in such a terrible position, and that I felt very personally betrayed by the actions of someone my family had considered a friend for decades.

“As part of that conversation, I told Earnie that I thought it was especially unfair that Gio, who had apologized for acting immaturely about his playing time, was still being dragged through the mud when Gregg had asked for and received forgiveness for doing something so much worse at the same age. Without going into detail, the statements from yesterday significantly minimize the abuse on the night in question. Rosalind Berhalter was my roommate, teammate and best friend, and I supported her through the trauma that followed. It took a long time for me to forgive and accept Gregg afterward, but I worked hard to give him grace, and ultimately made both of them and their kids a huge part of my family’s life. I would have wanted and expected him to give the same grace to Gio. This is why the current situation is so very hurtful and hard.”

Danielle Reyna’s statement continues: “At the time I called Earnie, many people were trashing Gio on social media due to Gregg’s comments, and I didn’t know when or if this would stop. I just wanted Earnie to help make sure that there would be no further unwarranted attacks on my son. I thought our conversation would remain in confidence, and it didn’t occur to me at the time that anything I said could lead to an investigation. I’m not criticizing Earnie here.

“I very much commend the recent efforts by U.S. Soccer to address abuse of women players, and I understand now he had an obligation to investigate what I shared. But I want to be very clear that I did not ask for Gregg to be fired, I did not make any threats, and I don’t know anything about any blackmail attempts, nor have I ever had any discussions about anyone else on Gregg’s staff — I don’t know any of the other coaches. I did not communicate with anyone in U.S. Soccer about this matter before December 11, and no one else in my family has made any statements to U.S. Soccer regarding Gregg’s past at all. “I’m sorry that this information became public, and I regret that I played a role in something that could reopen wounds from the past.”

“I support my wife, Danielle, and her statement. I too was upset by Gregg’s comments about Gio after the U.S. was out of the World Cup, and I also appealed to Earnie Stewart on December 11 asking him to prevent any additional comments.

“While in Qatar, I shared my frustrations about my son’s World Cup experience with a number of close friends, Earnie and Brian McBride among them. However, at no time did I ever threaten anyone, nor would I ever do so.”

It’s really disgusting. Lost all respect for the Reynas, all three of them. Their son had a shit attitude so didn’t get to play, and they decided to dredge something up that was settled by the principals long ago.