Who do you wish to sell

That’s Gini, Larouci, Millar and Grabara out the door along with some academy players. We are making room for another signing Barella is the one most seem to be talking about at the moment.

Seem to always be picking up young keepers for the U18s or U23s so not surprised to see one or two move on each summer.

Clearly not going to get past Kelleher as the “young option” in the backup group for the first team so £3m is better than moving him on for nothing like most that aren’t going to make it.

Woodburn (not sure if we consider selling him)

Could someone please write down what’s been reported on how much we could get for each one of them?

Can easily be done I guess.

Given all the speculation at the moment, I propose a new annual TAN Transfer Season game, to be named after our transfer guru. ** REVISED RULES ** Pick up to ten players and what you think Mikey will negotiate for them. If Mikey sells more than ten players, anyone with all ten of theirs wins. Otherwise, it’s the highest total of correct players. If Mikey sells fewer than ten players, anyone with all of these players sold wins. Again, the highest total wins if nobody has them all sold. For e…

So looking at the current squad we have an immense task to clear the decks.

For squad rules these players break down into 4 groups;

Players considered club developed (I’m Europe there are 4 slots that can only be filled with these or not used); Kelleher, Alexander-Arnold, Gomez, Woodburn, Wilson, Awoniyi, Ojo.

Things to keep in mind are contract lengths.

Origi, Milner, Karius, Woodburn, Adrian all have 12 months left. Do we let them run down losing them for nothing? Extend them now? Or sell them whilst we can for what we can get?

15 players contracts end in 2023;
Salah, Mane, Fabinho, Van Dijk, Firmino, Keita, Henderson, Oxlade-Chamberlain, Wilson, Grujic, Shaqiri, Phillips, Awoniyi, Rhys Williams, Ojo. Do we extend them all before they get into their last 12 months? Some we clearly need to ASAP. Do we give some a little more time to try and see if they earn an extension? Or move on now before their value drops?

My definitely extend list I’d we can get them to agree;

My list to move on for what we can get ASAP (so we have more time to bring in reinforcements if needed);

Might consider for a squad role for next year whilst they try and earn an extension but open to sell if good offer comes in that suits all parties;

Adrian the only one voluntarily left to run down his contract.

That would leave a squad of;
Alisson, Kelleher, Adrian for GK (sorted).
VvD, Matip, Konate, Gomez, Davies, Williams for CB (overloaded?).
Alexander-Arnold, Robertson, Tsimikas, Williams for FB (sorted unless anyone pushes for departure).
Fabinho, Henderson, Thiago, Milner for CM (maybe additional player needed with injury issues and Milners age).
Oxlade-Chamberlain, Jones, Wilson, Minamino for AM (maybe one too many as don’t use a lot here).
Salah, Mane, Jota, Firmino, Elliott for attack (maybe one to add, an out an out CF option would be best in my opinion).

Not an ideal squad but pretty damn good and realistic expectations.

Things to keep in mind are contract lengths.

Origi, Milner, Karius, Woodburn, Adrian all have 12 months left. Do we let them run down losing them for nothing? Extend them now? Or sell them whilst we can for what we can get?

15 players contracts end in 2023;
Salah, Mane, Fabinho, Van Dijk, Firmino, Keita, Henderson, Oxlade-Chamberlain, Wilson, Grujic, Shaqiri, Phillips, Awoniyi, Rhys Williams, Ojo. Do we extend them all before they get into their last 12 months? Some we clearly need to ASAP. Do we give some a little more time to try and see if they earn an extension? Or move on now before their value drops?

First group: The one with some double digit market value here is obiously Origi. It seems like we don’t mind letting players leave on a free, so it wouldn’t surprise me if we keep him one more season and just don’t extend. On the other hand: if it’s vital to get some money in from sales he’s an obvious candidate. I guess it comes down to whether or not Klopp sees him as a player who can contribute this season, and of course if there’s interest in the market.

Milner and Adrian are perhaps players who could get a 1-year extension. I think Klopp is keen on keeping Milner around for as long as possible; and if both Adrian and the club are happy with him being 3rd choice he could perhaps end up getting another 1-year deal.

The other two, who knows. I’m guessing they’re very much available for sale or loan.

In the second group, you would think the majority of the first eight - the established first team squad members - get extended, and Rhys as well.

I’m unsure about what we’ll do with Keita and Ox. Seems up in the air to me, difficult to guess. My gut feeling says we’re keeping both and decide over the coming months what to do in terms of extension vs sale next summer.

Phillips is kind of the same, my guess is we’re keeping him as insurance while Van Dijk and Gomez recover, but I really have no idea what to think. Sale or extension, neither would surprise me.

And then the rest in that group are players who seem to be on their way out this summer, one way or another.

Could be, transfermarkt says it expires 2022 but I see there are others saying 2023.

Thought it was a one year extension with an option on a second year. So if club or Player want to part ways next summer they can but if both parties agree it can go another year.

Have put this here not the twitter thread as its more a good visual for discussion here; 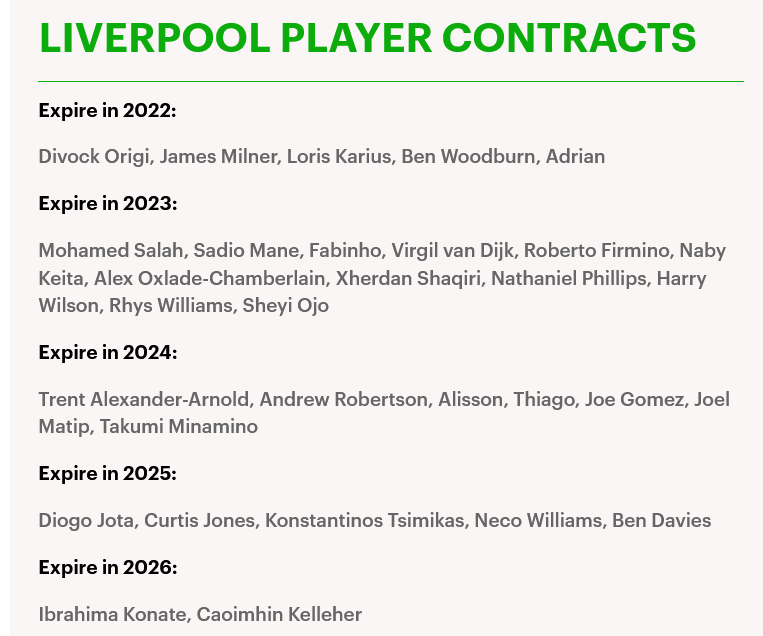 Thrown in as a makeweight with the Grujic deal I expect.

He’s taken Ben Davies place as the invisible ‘one’ (sorry I’m not going to call Hendo a werewolf and am not ‘quick’ enough to think up something else, so ‘one’ got used).

We got Ben Davies from Preston N.E., right? I think that explains it. There’s probably a clause in his contract that he plays for us only once every Preston Guild.

Look it up. It’s akin to a blue moon.

Two days left of the week, come on Mikey, work some magic.