Yay, another forum game (… said possibly nobody…), but still, this is one you can do now and then safely forget all about for 10 months!

Basically, predict how the final PL table will look in May, and then you’ll score points depending on how good/bad your predictions were.

To make this as easy as possible, the aim will be to get as few points as possible (lowest wins, in other words) - you’ll score 0 for every correct placing, 1 point if the team finishes one spot away from you predicted placing, 2 points if they’re two spots apart and so on. So, for example, if you pick City to finish 20th and they win the league, for that you’d score 19 points.

You can also feel free to use the BBC league predictor that @Kopstar just did in the PL thead:

Posting mine again so it’s in a convenient place

@ZinedineBiscan are you assuming Kane stays at Tottenham in your scenario?

How did you get yours to appear that small? I’m all-too aware that mine came out oppressively large

I just didn’t fluff it first.

@ZinedineBiscan are you assuming Kane stays at Tottenham in your scenario?

He’ll either stay or they’ll bring in someone like Martinez to replace him, so I think they’ll do ok overall. Romero sounds like a beast of a defender.

I like Martinez but he’s more like Firmino. He won’t bring anywhere close to the goals that Kane brings. Yes, I’ve heard good things about Romero but without Kane’s goals (and assists) they’ll struggle. They could do with Nuno managing to gey Alli back to what he was three years ago. 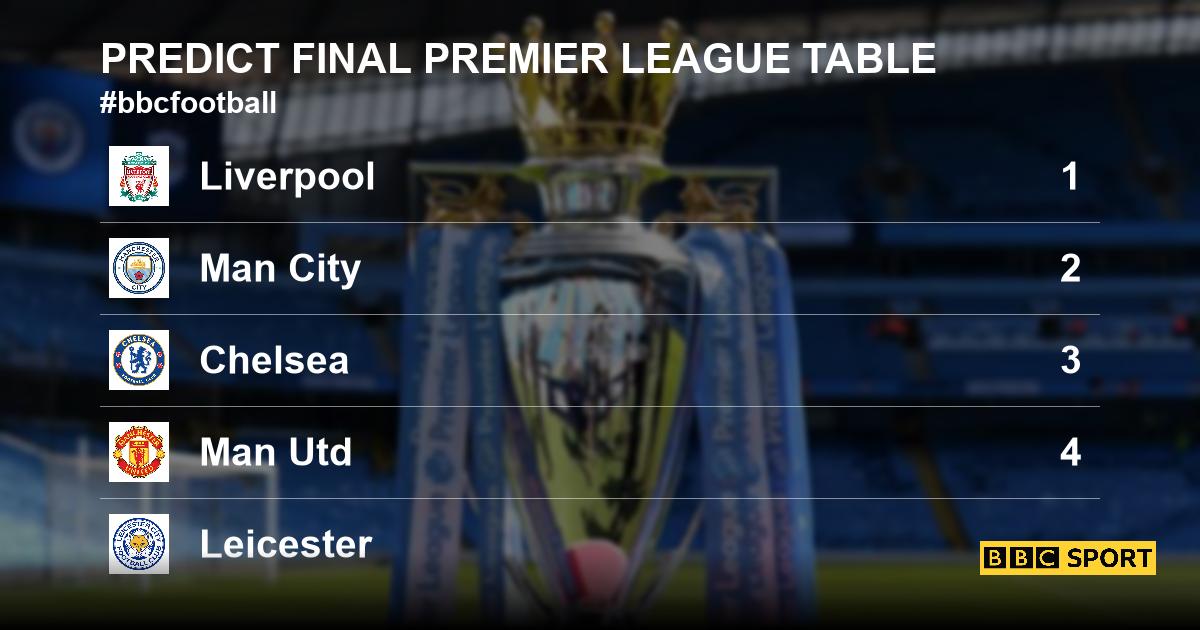 Rank the teams from champions down to the relegation places

There you go. Saved you all the bother of watching the footy.

I also think beyond Leicester the midtable becomes much of a muchness - Villa will be struggling to replace Grealish (plus a lot of new signings to bed in), Arsenal are Arsenal, Everton have Rafa but are skint so he’ll struggle a bit to get a decent tune out of their squad, Leeds are willing but still fairly suicidal at the back, so I think things between 6th-14th will be really tight this season, and it won’t take a lot of good or bad fortune for teams within that pack to trend upwards or downwards.

Can I add that my top five places need some annotations

*Despite finishing first Man City are not crowned Champions but are instead relegated for breaching PL FFP. Their uncovered transgressions are found to have occurred for the season 2018/19 and this title is also stripped from them, being awarded instead to the runners up that season, Liverpool.

Liverpool now have a record 21 league titles, leapfrogging Manchester United in the space of one season without actually winning the league.

The fume in Manchester is said to have accelerated global climate change by 30 years. With the weather in Liverpool now a tropical paradise, Mbappé joins on a free, swayed by the lifestyle offered by the Merseyside Riviera and uncomfortable with the thought of living in Madrid which has become the epicentre for the earth’s most powerful hurricanes.

United finishing last was tempting I must admit.

Working on a proper pic on my phone.

I am always very pessimistic. I hope I’m wrong

I just copied the image URL on the predictions generated and pasted here, it worked.

I feel like Chelsea are beginning to look very strong again unfortunately.

Chelsea, interesting call. Could definitely be a force this year.

Chelsea, interesting call. Could definitely be a force this year.

Or, Tuchel could burn their heads out and piss off everyone at the club.

A full season under a world class manager, having added a world class striker and looking likely to sign one of the best young central defenders around to supplement a squad which is already pretty ridiculous in terms of its depth. Off the back of winning the Champions League as well I just get the feeling it might be their time to have another one of their small spells of success before the owner inevitably gets bored again and the cycle repeats itself. Almost seems as if they are going a bit under the radar as well, I see United getting talked about as challengers more which just seems absolutely crazy to me, Chelsea are better than them in every conceivable way.