It does sound like they are trying to sort it out but I suspect the cultural problems go right to the top. I do wonder if they would be better off creating a new structure in a similar way to how PSNI replaced the RUC.

I’m not sure if this was posted on here

But this has to be part of the problem.

The problem is that calls to defund the police will actually make matters worse. Less funding would see pay cuts for officers that are already got serious questions about their character, and less money would only encourage them into more dodgy practices and corruption/bribes

What the solution is though, I have no clue

I’m not sure @Mascot is talking about defunding the police so much as complete organisational overhaul.

I’m not sure @Mascot is talking about defunding the police so much as complete organisational overhaul.

Mascot wasn’t but @Flobs was, and he was replying to Flobs.

It is risky, but at this point, if it’s an institutional culture issue, then what can be done? I’m aware that we shouldn’t throw the baby out with the bathwater, which is why I was envisioning more of a reorganisation, with everyone in the police required to reapply for their jobs.

The question I do have is what expertise would be lost that would result in the vacuum that you describe.

Are they not? The specifics of how it plays out might be different, but isnt it fundamentally an issue of people in power thinking the rules do not have to apply to them and using that power to insulate them repercussions of flagrantly breaking the rules?

I was referring to the bit on defunding the police, I should have been clearer.

Unless I’m mistaken, there’s not that massive amount of misspending that the police departments in the US has, and on the contrary, policing here has suffered because of the funding cuts that have led to, among other things, withdrawal of neighbourhood patrols (disclaimer: I’m relatively new to the UK, so I may be wrong about this).

Where there are similarities (again on the topic of defunding the police), it’s mainly to do with the lack of spending on social services resulting in increased crime to begin with.

The problem is that calls to defund the police will actually make matters worse.

There is plenty of compelling evidence that weighting money towards preventing crime in the first place is far more effective than policing it after the fact.

With the Met, I think it needs disbanding and rebuilding from the ground up. It’s beyond repair.

Mascot wasn’t but @Flobs was, and he was replying to Flobs.

For me ‘Defund the police’ is a call for an institutional reorganisation.
You can argue what you like the fact is the whole Met is rife with real nasty disfuctional bastards. The whole lot need replacing and all in one go otherwise it will just stay the same. Leaving it the same would be worst than anything you could argue!!!

The whole lot need replacing and all in one go otherwise it will just stay the same.

I don’t think that is really possible and I suspect that there are plenty of decent officers in there trying to do a job around the “dysfunctional bastards”.

That’s not to go down the whole “few rotten apples” analogy. It’s the barrel that’s rotten. I suspect that they know who the real culprits are. If they are unable to remove them then setting up a new organisation would be the logical step.

PSNI would be the obvious precident but I don’t know if that has made a significant difference. My impression is that they are better regarded than the RUC but is that mainly down to the improved situation in NI as a whole?

One of the problems is that once a toxic culture takes root, it’s very hard to shift. A big problem with the Met is that problem officers have ended up in positions of seniority.

Good cops are often bullied or marginalised out of the force. In a toxic culture you don’t get far if you can’t at least show you’ll turn a blind eye.

Christ, we’re Liverpool fans here. We don’t need to go that far to understand what happens when a police force starts considering themselves above the law. The problems at hillsborough weren’t junior officers lacking guidance, it was rotting and corrupt senior officers telling them what to do. It was the young coppers who were far more likely to break ranks a whistleblow on the corruption.

For me ‘Defund the police’ is a call for an institutional reorganisation.

Yes, as a solution it may not be well aligned with what is happening in the UK, but fundamentally it is a call to a adjustment of the role police play in communities and for there being more accountability in cases when that role is violated. The solution may not be an issue of funding per se, but there is an obvious throughline that makes the US movement aligned with issues people in other countries have with policing.

Thirty years ago , after the murder of Stephen Lawrence , we were promised a ‘root and branch’ re-organisation of the Met. It didn’t happen then and it won’t happen now.

Monterey Park shooting: Suspect found dead after dance studio attack - BBC News
California police have identified the gunman suspected of killing 10 people in a ballroom dance studio near Los Angeles as Huu Can Tran, 72, who was later found dead in a white van.

He had a self-inflicted gunshot wound and was declared dead at the scene, LA County Sheriff Robert Luna said.

Half Moon Bay: Seven dead in second California shooting in days - BBC News
A gunman killed seven people before being arrested in California on Monday, just two days after a shooting claimed 11 lives at a popular dance hall.

The latest attacks occurred at two separate locations in the coastal city of Half Moon Bay, about 30 miles (50 km) south of San Francisco.

The attacker was identified as 67-year-old Zhao Chunli, a local resident.

This is really odd. A senior of Asian descent shooting up a dance hall full of other older Asians with no apparent motive… A few days later, another older Asian man shoots 7 of his co-workers?

so much for Gung Hay Fat Choy…

Haiti , the only country in the world where the police take to the streets … to riot. 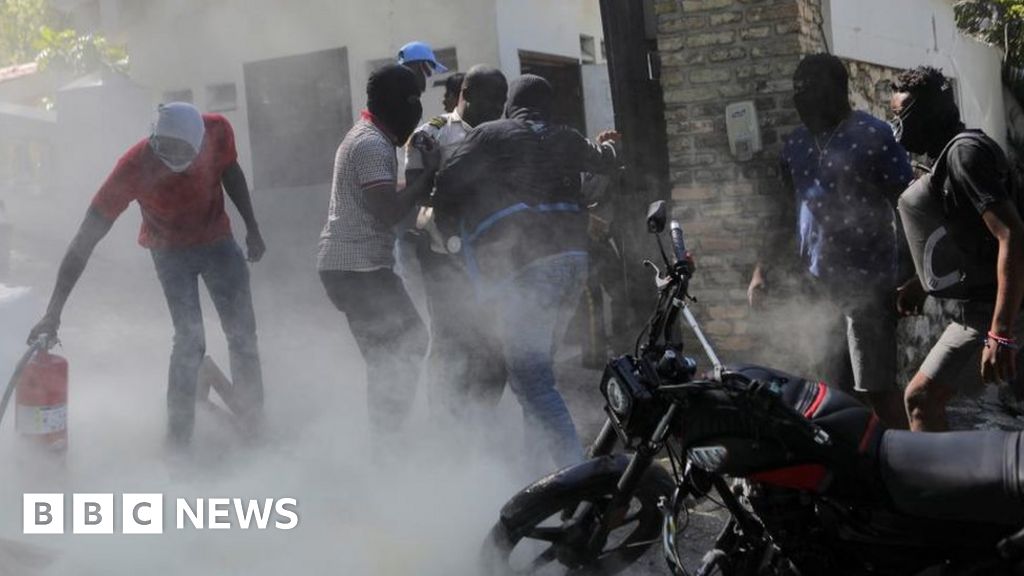 Fourteen police officers have died since the start of 2023 amid a huge surge in gang violence.

Ignoring the number of cops involved in Jan 6

that country has been through so much, but has destroyed itself.