Matchday 3 vs Newcastle
2-1 down in injury time of the first half John Stones fouled Fabian Schär in the box. Yellow card and penalty not given.
Stones received a yellow (which should have been his second) in the 52nd minute. Game finished 3-3

Matchday 6 vs Villa
1-1 with 10 minutes to go. Referee blows the whistle for offside just before a Coutinho shot hits the back of the net means VAR can not come into play. Phil was clearly on.
Match ends level but this might have been the winner. 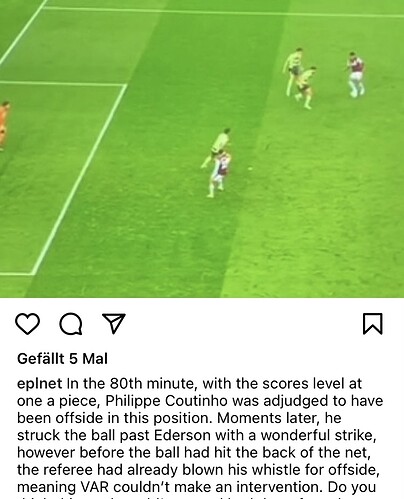 Matchday 4 vs Palace
2-0 down. 28th Minute.
Ederson rolled out the ball. Edouard not even attempting to stop it, but Ederson actually rolls the ball into him, and Ayew slots it into the net. Ref Graham Scott blows before it rolls in, so VAR can’t even look at it. Should have been 3-0. 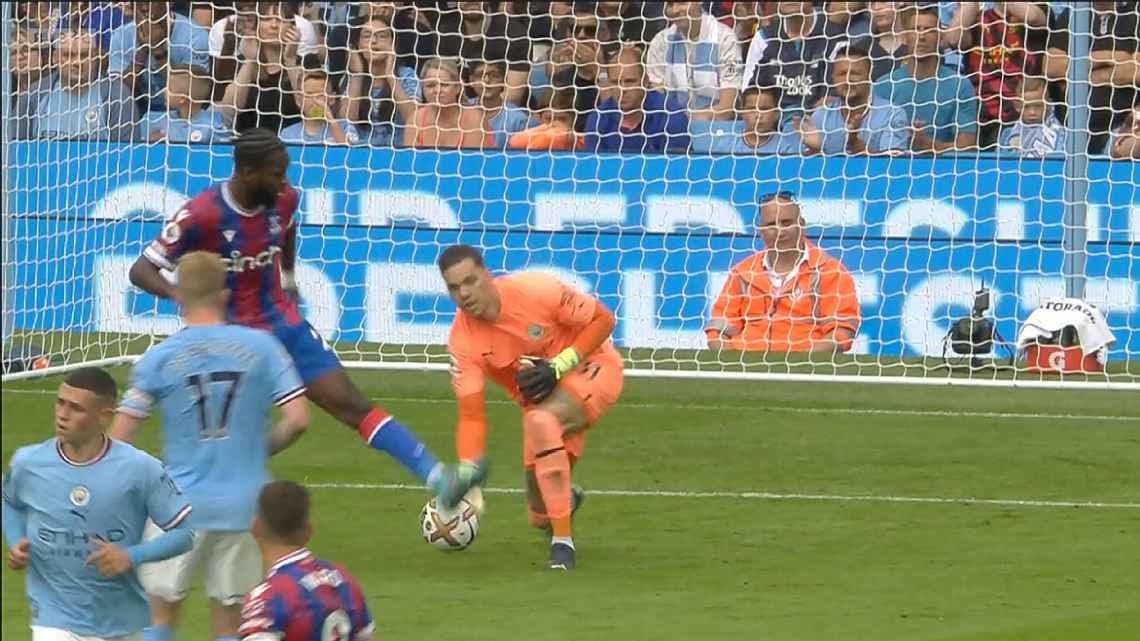 Please lets drop this one. It makes the forum look like cranks.

Terrible title considering that VAR couldn’t do anything with that…

Match ends level but this might have been the winner.

Weirdly there weren’t any real complaints from the Villa players…

Still think it’s at least debatable and should have counted - if only for Edersons stupidity.

Still thinking about how to make this thread work.

Looks like it will focus on City games alone.

I feel like it’s important to collect those wrong decisions over the course of the season but unfortunately I can not watch all games.

Still think it’s at least debatable and should have counted - if only for Edersons stupidity.

It’s not stupidity. Goalie’s know if someone tries to get in the way of them distributing the ball it is a free kick and so other than a brain fart from the officials there is little risk from trying to get restarted quickly.

The decision on the Coutinho “goal” is scandalous.
Give City the title now FFS.

Plus
The Ederson mistake vs Palace that resulted in s Palace goal was an incorrect call.
That goal should have stood.

Plus
The Ederson mistake vs Palace that resulted in s Palace goal was an incorrect call.
That goal should have stood.

Todays he should have let it roll.

It’s actually a bit baffling, VAR couldn’t overturn that as you make the point the goalie doesn’t bother with it.

If he saves it who knows.

For all the talk about Man City smashing everyone, they are a few very dodgy VAR reviews away from being behind us in the league.

how many points have we lost due to wrong decisions after 6 games?

or how many have gained?

how many points have we lost due to wrong decisions afetr 6 points?

or how many have gained?

Todays he should have let it roll.

That’s the contentious bit… but the whistle has gone and the defenders have already turned off before Coutinho carries on and shoots anyway so calling it a disallowed goal is factually incorrect. The game had stopped before he even shoots.

The linesman flags so the ref has to blow. Linesman at fault.

Can you show me an example of that ever happening? The linesman flags for offside and the referee waves play on…also how can a referee decide whether a player is offside or not? He might conceivably overide if the linesman hasn’t seen it come off a defender.

The other issue is at the stage he flagged, it didn’t look like a goal scoring opportunity. There would have been a lot for Coutinho to do.

The vast majority of the cases where the flag is delayed is when there is a clear route to goal.

But the fact remains that if he hadn’t blown, it was unlikely that Coutinho would have scored given that the defence and Ederson had turned off after hearing the whistle.

But cock up it definitely was. Poor officiating by the linesman. Inexplicable…because he appears to be nowhere near offside.

@Rambler
Its easily explained, except that you dont really want to believe the explanation.

City are three very “dodgy” decisions away from a mediocre start to the season, and as @Sweeting has correctly noted we are possibly two points down due to the Rashford offside goal.

Referees often overrule linesman when they flag, and in a less corrupt sphere the linesman yesterday lets play develop.

Finally, regarding the Ederson “mistake”…we lost a CL final because of thuggery and stupidity by Karius. Ederson did the same as Karius.
Goal should stand. Sorry @PeachesEnRegalia but you are incorrect this time.

Re. Referees often overrule linesman when they flag

I’ll probably regret this but give me an example of a referee overuling once a linesman has flagged for offside. I won’t hold my breath.

But in any case when he flagged incorrectly, Coutinho was running away from goal so it wasn’t obviously a goal scoring opportunity. If you are using that as another example of “bias” you are way off the mark. It was rank incompetence.

Re. Referees often overrule linesman when they flag

The linesman yesterday should not have flagged as they are supposed to let play develop.
Then VAR can adjudicate?
Is that correct?

When he flags the ref has a similar choice, stop play or see if it develops. He also makes a mistake?
Two weeks in a row refs blow their whistle whilst play develops that leads to goals vs City…

Can you give me examples of where that has happened with other teams?