Nothing can beat the Maestro turd. They were offered as company cars when I worked for a large UK contractor. The ground clearance on them was awesome (perfect for site work) and the 2.0L engine meant they went like stink despite weighing close to one of your American trucks. They were like tanks and I swear you could easily mount a gun turret on the roof. They came with a smoke screen as standard equipment and people quickly realised they didn’t need oil to run. I did 450 miles in mine over a weekend with a smashed wheel bearing. No bother.

They became company legend. One ended up in a Chinese restaurant, while another had two traffic police officers fighting over who would drive it to the compound after seizing it after the driver slithered out onto their feet after a few too many beers before driving. 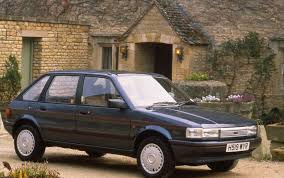 Would that be like two people arguing in a pub at closing time over which one got to take home the ugly fatty at the end of the night?

Luckily for me drinks where stronger in the 80s and Specsavers didnt have such a strong marketing team.

It was an old rugby club mantra on the basis that going early there was a chance you could make it back to the pub for closing time.