Bloody Diogo J. on the back of his shirt.

At least it’s not Diogo.J like one extremely one footed Spanish fullback used to have! 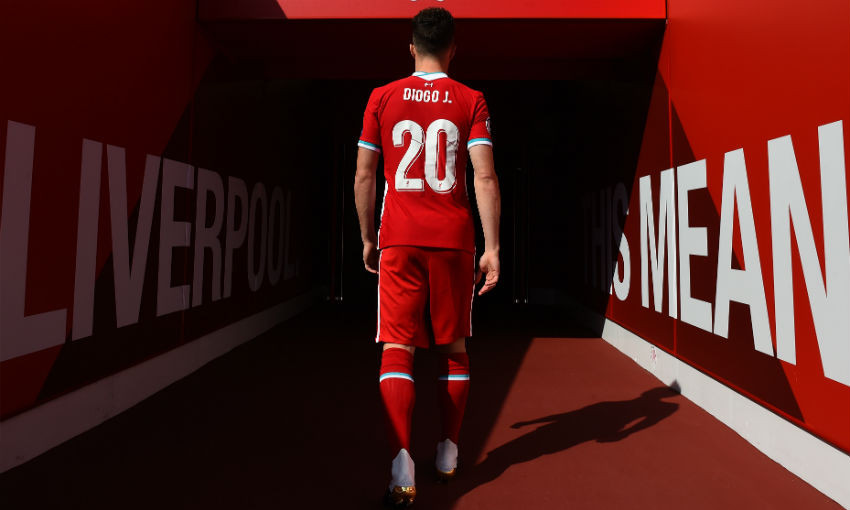 Not a bad two days…

I think a few people are underestimating the quality of this guy and what his potential could be working with our coaching team and Klopp.

I wouldn’t say he’s a 2nd option because Watford over priced Sarr,more of we get better value for money and an all round player than Sarr.The guy is a workhorse and isn’t shy to track back and win balls back,put in a shift and give 100% while he’s on the field.2 footed finishing,knows where the back of the net is,plays multiple positions on the wing or up front,Portugese International and young enough to learn and get a whole lot better.

He may not play in the same position or be exactly like him but I see him in a similar mould as Bernardo Silva with his energy to press to win balls back and start attacks,his acceleration to move the ball forward and run at defences with his dribbling skills.All that for £41mill is quite a decent fee in todays market,just hope the move works out for him and us.

This one kinda came out of the blue for me, think he is low key underrated by a lot of people, Jimenez to, another one I enjoy watching.

Like clockwork the cost has brought up questions on Werner which is understandable, but money aside, this one excites me more.

Every time I watched him play, he reminds me of Suarez in how he approaches the game, he’s aggressive, very direct, good movment, good in tight spaces and can get goals.

He literally stumbles through challenges and somehow still ends up with the ball and he’s off again, must be a nightmare to deal with.

Price is a bit steep for me but I’ll leave that to the capable hands of Edwards, give this man a pay rise.

I had a celebratory toke yesterday with some rum after the Thiago signing, after this signing wrapped up with that Utd loss im acting like its Friday again

Welcome to club, I know not a lot, but very happy.

Given we just signed a specialty LB, deploying Jota there would suggest a failure. Doesn’t hurt to have added versatility within the squad though.

It will be interesting to see what he can do in a red shirt. Looks neat and tidy, hard working, two good feet, goals too. If he can bring a goal threat, while also working hard for us, closing down, linking up play and so on, he will be a real asset.

Looking forward to seeing how close to the level of the current front three he can get.

Hopefully a start in the cup and marks his debut with a goal.

Given we just signed a specialty LB, deploying Jota there would suggest a failure. Doesn’t hurt to have added versatility within the squad though.

Our 4th most expensive transfer.

Joke aside (yeah, we got a nice fee for Hoever, even though I like the kid), he’s a pretty good player. Ceiling (or to be frank, can he become a front 3 starter in a few years?)? Not sure, Klopp also had some comments on that, he prefers the players he is at the moment rather than the room for improvement.

His name’s been around the game for a while, moving places at a young age. Perhaps Wolves did well to even get him that early, considering his talent and reputation.

Mostly played in that left half space. What I like about him is that he’s a very active player in both directions, he’s always busy. Quietly been one of the better players for Wolves. They rotate their midfield/forward structure of 3 at the back, it’s sometimes 2 up top, sometimes 3.

Klopp says he can play all 3 forward positions, but I don’t think I remember him playing anywhere else than the inside left in a forward 3 or left sided forward alongside Jimenez in a 2. What is significant is also the fact that he sees him as a real option for either sides in a midfield 4, when we shift to 4-2-3-1.

I’m very interested in his ability to mix it up. Along with Minamino, it’s been time for us to get better players in those backup forward roles. Origi just didn’t go on to improve and we’ve gone up a few levels since 2016 and 2017. I also wasn’t a fan of the Shaqiri signing (good fee yes, but it wasn’t enough for me), he’s not as good as people make him to be and certainly proved to be not as versatile as people made him to be.

If he can provide that, it could be a very handy tool for us to have. We could also flip structure/formations a bit often, like shifting Mane to the right sometimes (in some games when our right sided balance is weaker and we need protection).

So now it’s interesting to see who is the 3rd forward who will stay with us. Minamino is an option for Bobby’s role and also the inside left channel. Jota is primarily (let’s say so far) an option for the left, we’ll see how he does elsewhere when/if Klopp plays him there. Origi looks like he might stay, but he’s also more a left sided forward or striker option.

Portugal do have a quality side these days, even with a pretty defensive coach, they seem to have bought into this idea more or less, in order to get results. As long as Ronaldo keeps playing/performing, maybe Jota won’t get a lot of game time anyway (though they can play with both in some combinations).

We’ll see. Maybe we’ll still aim for a ‘Werner’ type of signing next summer. I believe we would’ve bought him if the whole virus thing didn’t happen.

PL on Jota: I have known him since he was very young. He's from the city of Porto. We played against him when he was young. In Portugal they are saying what a great signing Liverpool made because they know how good he is and what potential he has.

PL on Jota: He has so much future in his feet. He is like a pressing monster. For tomorrow, the good thing is this group has created a mentality to see the next game as a final. It will be a good team that represents us tomorrow.

Lijnders simply adores him, if Jota fulfils his expectations, Liverpool will have their first Portuguese great!

It’s not difficult to excite Pep though, it’s in his nature. I’m sure he’s still excited over Naby like we just signed him!

But yeah, he must be well informed on Jota.

Want another signing day video? Of course you do! 😉 🎥👀 Go behind-the-scenes at Anfield on #JotaSaturday✍️ https://t.co/zUX9WznOFF
6 Likes
next page →