I started collecting Liverpool FC scarfs during their Championship run in the 2019/20 season. I’ve bought all the champions scarves from trophies they’ve won. Euro Cup, PL League, Caribou cup, player scarves, and misc ones. My question is are there any other collectors out here and if so, how do you display your collection. I wear one during each game I watch and switch into a new one each new season.

As long as you don’t have any half and half ones. They really are the Devil’s tools.

I’m a badge and sew on patch person myself.

Ive got one LFC scarf that was bought from me from the club store at the stadium as a gift. I now wear that scarf to every game i go to. Wouldnt buy another now!

I do keep ticket stubs to any games i go to; but only really get them for away games. Wembley semi final one on the fridge still.

Do you think a half and half is ever justified?

I only have a couple LFC scarves, but I have many of other clubs I’ve either bought from the street vendors or swapped in the bars on European away days.

If you really want a souvenir from, say, our visit to Villarreal, a Villarreal scarf seems more meaningful than a half and half - especially if you’ve swapped it with some pissed up local you made peace with in a bar after the game and will never see again.

I did buy an half and half for my old Jack Army grandad’s grave when Swansea came to Anfield in their first PL season, though.

Do you think a half and half is ever justified?

I’m not really keen on the half and half scarves, probably because I’m not able to attend games, only watch and cheer on the TV.

When I was watching the FA Cup semi, there was a City fan wearing a half and half.

To the original point, I only own one liverpool scarf which I’ve had for about 25 years, but I use it mostly to pin Liverpool badges to so they are all in one place.

It would be nice to see the collections of you guys.

I’ve got 5 nowadays. Never was a collector, but 6 years ago I won an Istanbul scarf signed by Carra in a raffle that my local supporters club had. Have picked up others (no half and half’s) since, and plan to display in my new man cave.

How about if the Liverpool half is bigger than the other half?

I only have one scarf from my first visit to Anfield some years ago that I bought from a street vendor.

Only have 1 LFC scarf which I bought in 2007 when I had a few nights in Liverpool - didn’t get to a game as the only game on at that time was in Athens.

I do collect scarves when travelling to watch Australia and do get half&half scarves for games, but have never worn one - they are merely to act as a momento of those trips.

I’m trying to figure out a way to display the scarves I have by hanging them on some sort of wall hanger. I’ve got two towel hangers that can hold about nine scarves on each one but it’s to crowded and you can’t see what’s on the scarfs lettering etc. I’m thinking about getting a pretty long curtain rod with end brackets and displaying them that way in a more permanent manner. Right now during game time on TV here in the states I display a few off a closet door just to decorate the living room for game time. I take the game time stuff down after each game. 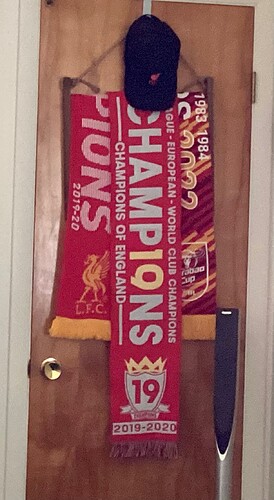 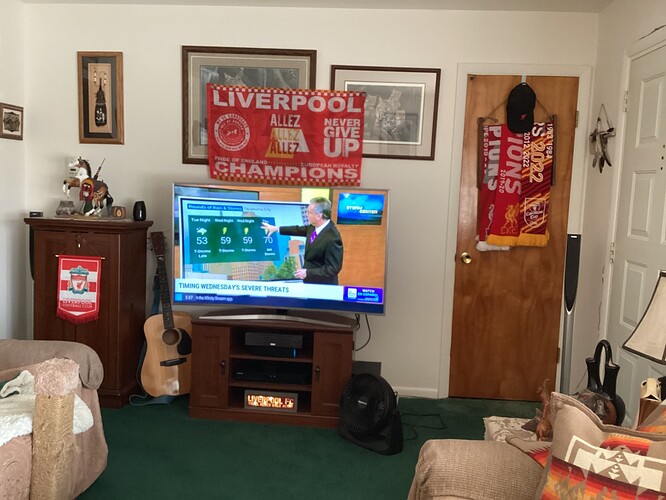 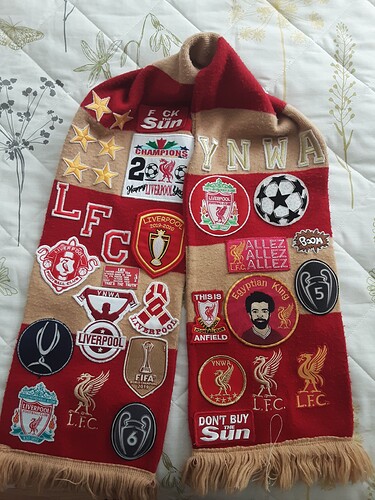 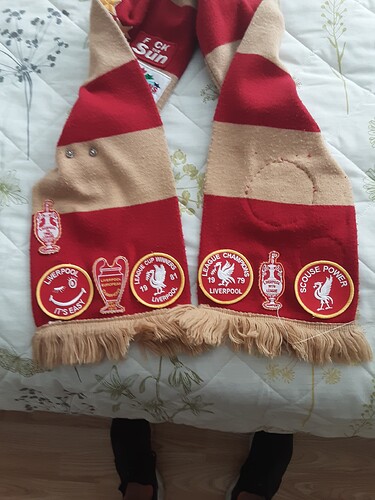 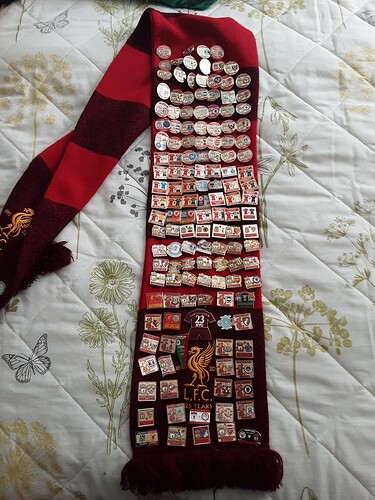 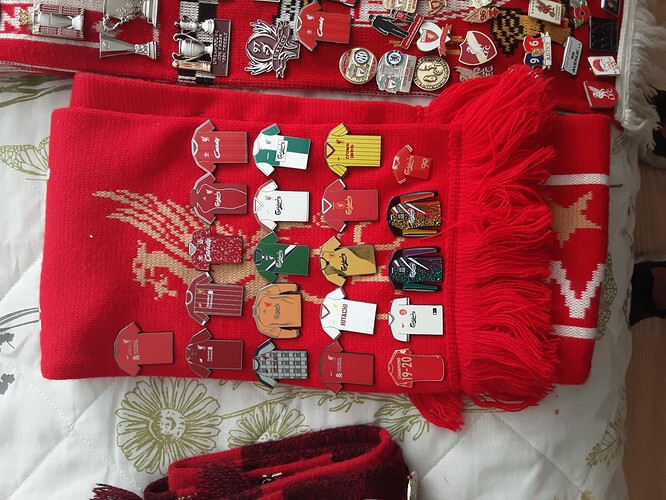 I also have over 50 different LFC shirts washed, ironed, folded in plastic bags and stored in plastic boxes in my lofft. They’ll be going to my Grandson when I think he’s old enough to look after them.

Your match day scarf is running out of space. Where are you going to sew the 7 European Cups badge at the end of this month?

Those are really nice and gave me ideas. Very cool indeed. I’ve only been a fan since 2018/19 season. The only pins I have so far are from my International membership packages starting in 19/20 season.