This one for me is one of the new guys on the block, Micah Richards. He clearly sets out to be controversial and wants to be the centre of attention. To think that this guy who has conned his way to a fortune is adding to it by spouting his BS on TV and in the press really annoys me. As a player he left City for Villa and was put on good money in the midlands but rarely looked worth a penny of it for the club. Then came an injury and he spent the last few seasons mostly on the treatment table I think he may have helped coach the youth team for a while but I know Villa fans really begrudged the money he was taking from the club and felt he was conning them.
Who are your most disliked pundits ?

Does Martin Tyler count? He is just a cunt, and is a shit commentator as well.

We all know about Tyler and his love for us.

I used to despise Warren Barton, and not having to be subjected to his outright disdain for Liverpool, and Rafa in particular, was the single best thing about Fox losing the premier league rights in the US. There is a whole collection of pundits who you can group together as people who simply dont have an original thought in their head. Barton though took that to a new level by not only repeating the same brain dead nonsense as the rest of them, but would somehow always manage to throw in a dig about Rafa regardless of what he was talking about.

I like Micah Richards. I think he’s clued up on football and doesn’t shy away from his views. Him and Roy Keane (whom I also like as a pundit) combined make great viewing.

In terms of dislike, Pat Nevin grates on me. Not a fan of Rio Ferdinand either.

What was football commentary like 25 years ago? I loved the cricket commentary of that period. Michael Holding and others were so knowledgeable and very sober in making their points. Yes, they had their evils too.

Frankly, I’m not arsed about football commentary these days.

Richard Keys - hairy handed cunt.
Clinton Morrisons shit - bloke cant even string a sentence together but ticks sky boxes at the moment so he is now on Soccer Saturday.
BTs Jake Humphrey - thinks he something special. Hes not. Hes a smarmy prick.

Most are crap, i don’t mind Neville to be honest Carragher and Souness are ok too. 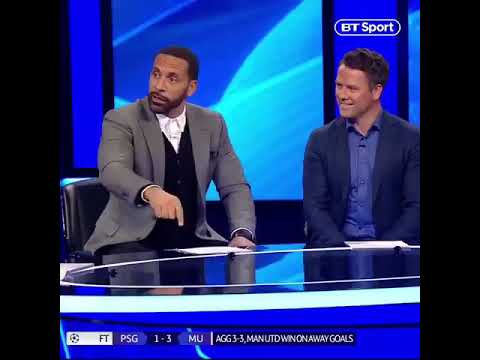 Micah Richards’ clown routine has got old pretty quick. It doesn’t help that he was on every show going for about 8 weeks straight. But he’s not close to being top of the most disliked, I just don’t find him at all interesting.

Danny Mills is a major gobshite and I can’t stand Danny Murphy either. Craig Burley is a tit as well, constantly negative about players as if he was a great footballer himself. Jenas is a total bore. Keown is properly terrible but I find him hilarious in an unintentional way. Glenn Hoddle is a major crackpot. I think Shearer has got better over the years albeit he’s still not the best. Ashley Cole is very difficult to listen to.

Ten posts in and I cannot believe Danny Mills hasn’t been nominated in at least nine of them…!!

He was never anything special as a player and yet in his own head, and his own living room… He is an expert on everything that goes on in a game, an expert on what players each team should buy, an expert on how to run and manage a football club… an expert on life… an expert on just about everything in the universe whether it be remotely relevant or not… (hope ya getting my point by now people…)

Oh… and one boring monotone sleep inducing voice to add to these other talents of his…!

Like Neville, Carra and Keane. Good personalities and work off each other well.

Richards was a good addition and was funny at the start and lightened it up a tad. Now I’m getting the impression he forces his laugh and humour on a bit. Would rather now see his real personality.

The rest I don’t like like Danny Mills (a twat), Murphy (another twat) and Rio (childish and chats some shit, reminds me a lot of work mates who watch a game a month and pipe up with ridiculous shit. Like a real life version of twitter as a human).

Jason Cundy - Half tempted to use his last name for an inappropriate pun, which describes him best.

Roy Keane - I don’t get the fuss. It seems like Keane is playing a character, a persona of himself that we have all grown up with. It’s got boring now.

Owen - If ever there was a punchable face. I can’t believe that my love for Liverpool started with him.

Nicol - I like him, but I often roll my eyes for the things that he says. I think ESPN have only kept him for shock/joke value.

I mostly prefer Carra and Neville.

Frank Leboeuf, when he is speaking about defending, is quite interesting. He is usually honest and to the point.

Warnock, our ex LB, is another one that I appreciate, though I have only heard him on few occasions.

Cris F’ing Collinsworth from the other, crap version of football.

Nicol is like that guy (my dad) who has nothing good to say about anything or anyone.
The Carragher/Neville “banta” schtick gives me a pain in the hole.
Danny Murphy thinks he’s clever but he’s not.
Everyone on Talksport is a wanker, especially Cundy and McCoist.

Souness is honest, but best pundit by a mile is John Giles. His views are honest, informed and always interesting.

I’d say Tyler has to be my most disliked pundit,just for the annoying jynx’s he tries putting on LFC during a game,when he’s supposed to be impartial.

Rio and Scholes are wank but it’s fun knowing whatever they do say,normally comes back to bite them on the arse.