60’ Thiago ALCANTARA on, James MILNER off

82’ Alex OXLADE-CHAMBERLAIN on, Sadio MANE off

82’ Xherdan SHAQIRI on, Roberto FIRMINO off

Well, that was shite.

Only the one change for the Tricky Reds tonight, as Diogo Jota was relegated to the bench and Sadio Mané returned to the starting lineup. A bit of a mystery, that one, given the recent contrasting form of those two players.

With this being the home game nearest to the 15th April, there was a minute’s silence before the match in memory of the 96. Gone, but never forgotten.

An excellent start for the home side, with Milner going in hard- but fair- on Benzema in the first minute and then Salah missing a glorious opportunity when shooting straight at Courtois when it appeared easier to score. Sadio then put in a teasing cross which Bobby just failed to reach; the Reds were all over Madrid in the first five minutes.

Milner aimed for the top corner from 20 yards; Courtois tipped over at full stretch. Robertson drilled in a free kick from the right, which Kabak headed over. At the other end, Benzema dispossessed Phillips and his attempted pass deflected off Kabak and hit the post; Vinicius saw a curling effort saved comfortably by Alisson.

Casemiro was deservedly booked for a late challenge on Milner; Robbo was inexplicably booked for his supposed response to this incident. Our left back didn’t appear to do much wrong.

Bobby then played a terrible ball when Trent was galloping forward on the right in acres of space; Robbo then failed to find anyone with his cross from the left. Trent whipped in a spinning cross from the right but Sadio couldn’t quite reach it; Nacho then cut out a dangerous ball from our Senegalese superstar before Mo could reach it.

Gini then turned Kroos and found Sadio, who fed Mo but the Egyptian could only fire over from ten yards. Trent then teed up Gini, who also fired over from twelve yards. Sadio then slipped in the box as he tried to turn Valverde.

As the players trudged off for their halftime oranges, it was a half which the Reds had dominated; we could easily have been 3-0 up and in control of the tie. One had to wonder how much our profligacy in front of goal would come back to haunt us.

The second stanza started with Trent playing a brilliant ball into Bobby but the Brazilian was denied by Courtois at the near post. Another Trent cross saw the same forward head over.

At the other end, a rare Real foray forward saw Milner make a crucial intervention after nice play by Benzema and Mendy. Firmino blasted over from the edge of the box; shortly afterwards, Thiago and Jota replaced Kabak and Milner on the hour mark as Jürgen decided to go all guns blazing.

The pattern was set for the last half hour: it was going to be attack vs defence, with Madrid setting up camp in their own penalty area and challenging our forwards to find a way through.

The visitors were hoping to hit us on the counter attack and almost did do but Alisson made a fine double save to deny first Vinicius then Benzema. At the other end, Jota fizzed a header over immediately afterwards. Another chance gone a-begging.

Salah then took too many touches in the box and allowed the visitors to get back and block his shot; Firmino then had a goalbound effort blocked by Militao.

We appeared to run out of ideas with twenty minutes left and Benzema (who looked offside) almost dealt the coup de grace with ten minutes left but his powerful downward header bounced harmlessly over. Ox and Shaq came on for Gini and Bobby but it was too little, too late and a game that had promised so much when the Reds came roaring out of the blocks ended with a whimper.

The truth is that we should have been in control of the tie by half time and poor finishing in that first half cost us dear. Our bench isn’t good enough to change things, sadly, and we simply weren’t good enough in either of the two ties- our defence let us down in Madrid and our attack did so tonight.

Let’s just hope that Real do the same to the Chavs in the semis and, should PSG fail to stop them, Abu Dhabi in the final. I do not want another English team to lift this trophy. In fact, seeing that City, PSG and Chelsea are all oil teams, I hope Real go on to lift the trophy. They may be cunts, but at least they’re a club with proper history.

Next up is a trip to Leeds for Monday Night Football… now, where’s that Star-Spangled Banner? Bielsa’s boys showed they were no pushovers with their win at the Emptihad the other day; we must not underestimate them but desperately need the three points in order to stay in the race for a top four finish.

MOTM: Daniele and the team at Rossopomodoro in Monmouth Street. Popped in (well outside, on the street) there for lunch today; quite simply the best pizza in London. And their tiramisu is bloody good, too!

I once worked in a town called Wankdorf in Switzerland. Pretty much how I’m feeling right now.

Well played lads. Absolutely took it to Madrid, and made them look wobbly. But, as so often this year, just could not find a finish.

We huffed and puffed but could not score, Madrid defended well and deserved to go through. Now top four is the only target.

Few players look a bit happy about that. Walking off smiling and chatting with Madrid players. Like they expected that result

Congratulations to a tactically superior Real Madrid side. They perfectly managed to take the sting out of us, especially as the second half went on.

No complaints about the effort put in by the lads though. The precision and killer-instinct was found lacking in the key moments, but had the effort been the same in Madrid than tonight, then we’d possibly head into extra-time as we speak. Milner was a key figure, and our energy instantly dropped down when he left the pitch. Gini might be a good midfielder, but he’s certainly not a captain.

Missed opportunities which we had loads. Better team but couldn’t score.

i know folks dont want certain players to be sold etc… but we have reached an impasse. we need a freshening up of players and system

I wanted before the game to show fight, to show intensity…which we did for 60mins, sadly when Milner went off all our heart went with him. Today sadly showed what a bottle job the team did in the away tie, fuck me Real aren’t that good.

The forward line needs a rethink, this 433 has to change, some of that forward line have regressed to levels not acceptable anymore. This game was a rinse and repeat of all season… miss chances, lose heart, retreat into this fucking horrible slow passing game ending in an aimless cross. Fuck me it was a dire last 30.

You know what Mo if you are going to let a big article get released the afternoon of a huge game where it hints that not all is rosey and aligned with you and your club, you know what… fucking then step up and delivery to show why you are worth the contract you have asked for.

Looking forward to Milner retiring and Gini departing so Klopp will stop putting them in the starting XI.

Full marks for effort. We gave it a real go.

Mane would be first out the door for me

Extremely disappointing. We had plenty of chances to send Real home. The players gave it all they had, except introducing the ball with the net from the inside. The performance in the first leg was our Achilles heel. What a difference a year makes. 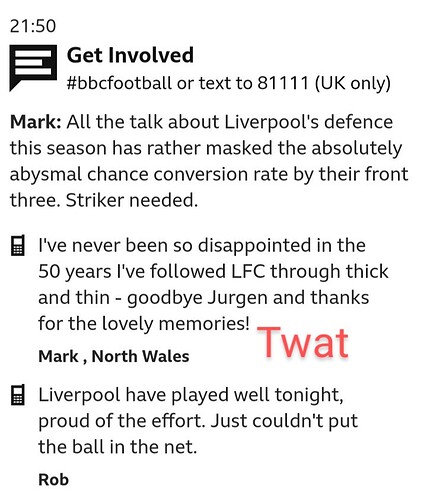