Final fixture in the set of back-to-back games, as we have a one-week gap after this one.

Hodgson’s side have been unpredictable, winning comfortably against the likes of West Brom and Leeds 5-1 and 4-1 respectively, while losing against Burnley and Newcastle in between. Their last two games have been 1-1 draws, with Benteke sent off against West Ham in the last one. Clyne would be the only former Liverpool player back facing us, as Sakho isn’t favored of late.

We would be buzzing on the other hand, with a hard-earned late winner, that took us 3 points clear at the top. Mathematically, United and Aston Villa still have games in hands to close the gap to less than 3 points, although no one can surpass us. Good to have the pack chasing us again, and long may it continue.

Expect Klopp to go with the strongest available line up again, as the team could continue to build upon the momentum and we do not have a game until Sunday the subsequent week.

Agree with @Colossal_centre_back lineup. After that we have 8 days until the next game.

Don’t think Keita and Ox are ready to start. Maybe (but very unlikely) Klopp would think about starting Minamino to give Mané the chance to come on in the second half.

Jonathan Moss is referee for this game, Stuart Attwell is 4th official and Simon Hooper on VAR

Matip back in training today so he should partner Fabinho and the rest should stay the same as yesterday. Come on the mentality monsters do your stuff again.

Doesn’t really matter who they are. All fifty-fifty decisions are going against us.

Time for the real away team to show up.

We also might as well start Keita before he is injured again, and Matip.

Don’t need to rotate for this have 8 days off after this game.

8 days off doesn’t help if you blow your hammy during the game.

That could happy anytime though.

This is a very difficult fixture as 1, it is away and 2, it’s an early kick off. We struggle in these circumstances. Klopp hates these fixtures and our lads suffer because of it. I wish someone would take the initiative to take a sausage along for Jurgen but that never seems to be the case.
My pessimism tells me a 1 all bore draw however my get the job done lads talk says 0-4 to us.

Don’t need to rotate for this have 8 days off after this game.

I think it’s more an issue of how the players are after their last game. It’s a two and a half day turnaround which is not that long. We don’t have that many options to swap out at full strength but I’d expect to see Keita feature. I think Mané is due a rest as well.

Yet again we are the early game and away - While the other teams who played on Weds play Sunday.
Complete joke.

@GermanRed how do you center align without having double space between line???

Yeah, I guess we would be going with that starting lineup given Matip is available. 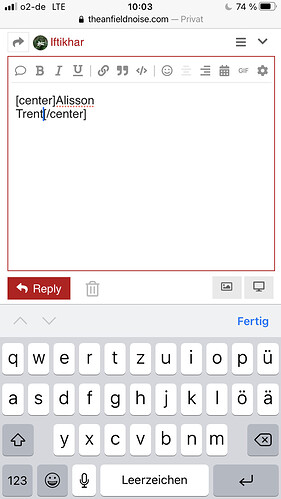 Imagine the shit we would be in if it happened to either of Fab or Robbo.