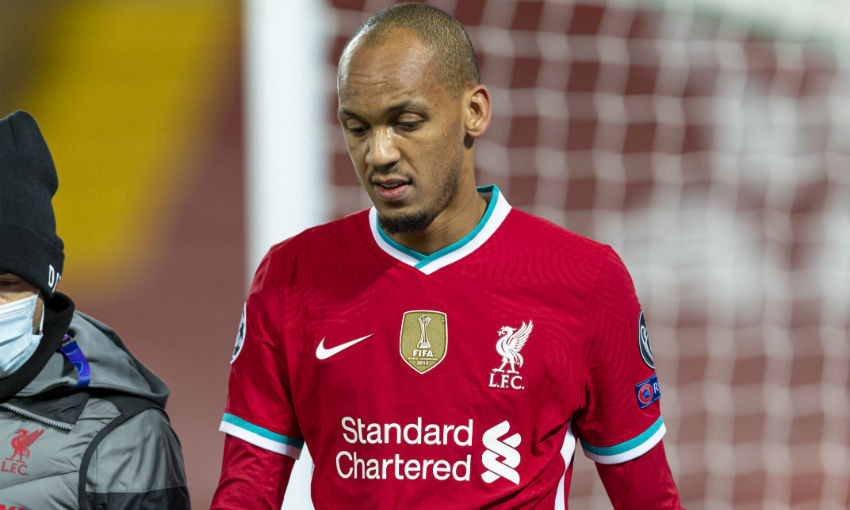 Liverpool are waiting to discover the extent of the injury Fabinho sustained during Tuesday's 2-0 win over FC Midtjylland.

Hopefully Henderson, Thiago and Matip are fit for this one. With us playing before Everton, and with the 6 teams involved in the earlier fixtures for this round being 3 points or more below us, we have the chance to go three points clear at the top.

Need take a grip of the league now.

I think Firmino needs a rest and Jota’s shown plenty enough to be given another start. Not sure how we would line up but I’ve put him as a straight swap for Bobby down the middle although equally Salah and Mane have shown they can thrive there too. It’s great that those three can provide so much flexibility.

Bobby has been struggling and missed a sitter yesterday but he did score at the weekend and with Jota having just played 90 mins on Tuesday I think we’ll see the normal front 3 starting together.

That midfield and forward line is world class and should be more than enough for West Ham. I am a little worried about Antonio bullying our center backs if Rhys Williams starts with Gomez. Could really use Matip back for this one.

Probably this, if nothing else happens:

Would rather have Mané in the middle and Jota on the left personally, but I highly doubt Klopp will drop Firmino out of the side yet anyway.

Unfortunately, Klopp’s guarded reply when asked about Matip doesn’t bode well. Not sure where that leaves us. Is Williams really ready for the PL?

Unfortunately, Klopp’s guarded reply when asked about Matip doesn’t bode well. Not sure where that leaves us. Is Williams really ready for the PL?

A real conundrum we find ourselves in. Before last night’s game, I was worried about when Fabinho would get an opportunity to rest and now with him injured, when does Gomez get a rest? Can’t catch a break yet can we?

Pretty sure that’s what would happen, if Klopp was to drop Bobby. People still often forget in how many serious situations Mane was Bobby’s replacement. To play central for us is not easy. Quickly on Jota, I think he played the least on the right so far in his career, but is showing signs he can play anywhere across the front 3. Allows us to keep Mane in his best position. Funny because someone like Shaq played the vast majority off the right, it looks like Jota overall pushed everyone lower in the pecking order. For now, I think we’ll stick with Bobby (though there will surely be rotations, I mean in these games when we really go full strength).

I’d say Phillips is the more likely option if Fab is injured.

Presumably he’s not fit, or he would have been on the bench last night.

Klopp said he wasn’t in the CL because they had a transfer to another club in mind. Perhaps why Rhys Williams got more game time in the CL. We’ll see if that means Nat gets more minutes in the league, or Rhys (or Billy) get those as well, since he’s picking up experience now, but on the other hand, maybe there’s a limit how much football can he play in a short space of time.

Hopefully Matip is fit but its Matip…when is he ever fit?
I’d go with the same lineup as you except I’d have Jota and not Bobby in the side. Leaving Bobby out makes me feel ill just saying it but something has to give and Jota is on form, exactly the opposite of Firmino.

@Kopstar @GratefulRed @Zoran lots of expectations that Joel Crisp will be ready for the match. Don’t let the burden your expectations crack him up further

I think it will be

Any news on Antonio? Came off at the weekend with a hamstring problem. Would be a huge loss for them.

If Matip can’t make it, wouldn’t surprise me if it’s Hendo at RCB for this one. I think he played there with Gomez at the CWC last season. Though that also depends on the situation in midfield, Thiago, Keita, Millie, etc. Maybe we’ll have to put a young CB in. Maybe Nat Phillips would cope better with the physicality of Antonio.

Maybe Nat Phillips would cope better with the physicality of Antonio.

Antonio has gone off two games in a row with hamstring trouble. Good chance he won’t make this.

You dont rest the guy who just scored the 10,000 goal for Liverpool, and the guy that has scored in two consecutive games at Anfield, vs a guy that is obviously struggling.

He was subbed on Tuesday, so I think that’s an indicator in itself.

Their come back against Spurs was really amazing and they drew against City. A win here would help our morale with a nice boost, and take us to the top of the table. Here’s hoping that happens and then we stay there at the end of the week as well!