I recently stumbled upon a news that Belgian and Dutch leagues will be merged by 2025. It reminded me of a thread I started few years back, in another forum.

What will happen if some of the smaller leagues merge!!!

I know there are lots of issues, ranging from logistics (longer travels) to ethnicity (Serbs vs. Croats), that will make the idea seem like a nightmare. But would it be worth trying!

Before the break-up Slovenia, Macedonia and Montenegro only had a handful of teams in the Yugoslav League. Now these nations have 16-team leagues with teams from lower division supplementing teams that have actually played in a top league. Even leagues in Serbia, Bosnia and Croatia had to ‘promote’ teams for a sizable league. The same can be said about former Czechoslovakia.

When you look at the earnings, some of the mid-table English clubs earn more than some of the leading clubs in German, Italian or Spanish leagues. So the earnings of the clubs from minor leagues are rather miniscule.

A league of Ajax, PSV, Anderlecht, Liege is certainly more interesting and competitive than just half of them! This can translate into greater TV, Sponsorship (league & teams) and even ticket revenue. This is something they badly need. It may also translate into better qualification process for CL & EL. But most importantly, teams will benefit from better competition.

I don’t think merging domestic leagues is a solution to anything.Sadly more than likely gonna see a euro super league,big glam and glitz franchise clubs,and the rest will be left to sink.Especially now there’s no one going to games.

the merging of leagues or the creation of a new league was been discussed as far back as 2000,
the plan was to call it the North Atlantic League, featuring teams Belgium, Netherlands, Scotland and Scandinavian.

nothing came of it though.

If the Dutch and the Belgium’s do merge leagues,
how long before Celtic and Rangers start making noises about joining another league,
as both teams are way too big for Scotland

I do find it odd with Rangers in the position they found themselves in didn’t just think let’s try and force ourselves in the English pyramid, would have taken another couple of years but surely one they had got to league 2 the attendances would have been better than most Scottish Championship clubs.

To me the only way they get in will be if a team drops out lower down, surprised one didn’t approach the EFL when Bury went. I bet both will be looking closely.

They are looking into that but so many supporters are against it, I have serious doubts it will happen.

Just been watching Aberdeen v Celtic second half, it’s not a very good standard of football. I can see Gerrard and rangers winning the title.

I thought it was a good watch,no var!! was gonna post in the pundit thread about the commentator who kept going up a key/pitch each sentence after the goals were scored horrendous!

Entertaining it certainly was but riddled with errors.

Is there any UFEA regulation that a club must play 38 games in their respective league? While clubs in the major leagues play each other just twice (home and away) clubs in smaller leagues play more than twice (in various formats).

Is it worth a Scottish footy thread? Lennon gonna be looking for a new job soon.Celtic 2-0 down to Ross County in the league cup last minute.Final whistle Celtic out.

They still have a League Cup

I’m lost as they seem to be playing the SFA cup final in a week or so’s time, might lose that now.

Does seem like Gerrard is starting to get the upper hand, his results in Europe are also excellent for a Scottish side.

What a bunch of yobs.

Beitar Jerusalem is infamous for never having an Arab player and for some fans' racist behaviour.

Seriously, this lot is beyond despicable, way beyond.

I can only think about the Nazis and the Stasi who could taint the sport this much.

Really nice assist by Malen for Zahavi against Ajax, look it up. 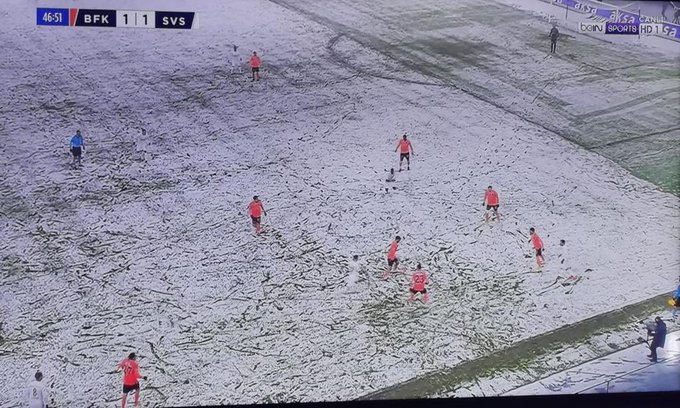 How the hell did they allow this game to go ahead.

You can see the lines? What’s the issue?

Seen far worse being played on even in the modern era.

You can see the lines? What’s the issue?

Seen far worse being played on even in the modern era.

Can you see the players in white kits???

Playing in an all-white kit during a snowstorm renders Sivasspor almost invisible to television viewers for their Turkish Super Lig game with Istanbul Basaksehir on Saturday.