Not my usual type but quite enjoyed Echoes.

Dahmer (Netflix) is pretty damn good. Has an 18 rating, but so far (halfway through currently) it walks the right line between being grim enough to not gloss over what he did, but not being gratuitously gory either.

Then there is the complete cutting of the whole Tom Bombadill bit, giving stuff to Arwen that she never did in the books etc.

True. But it’s still one of the best adaptations.

The film adaptation of lord of the rings is one of the best ever for me. I read the books multiple times as a kid and never in my 20+ times of watching the movies did I ever see anything that broke canon in a way which made either experience poorer.

True. But it’s still one of the best adaptations.

But it is strange that despite Peter Jackson taking enormous liberties with the source text, it is universally beloved, even by Tolkien purists. Whereas Rings of Power was subject to a fan backlash before a scene had even been shot.

Sadly, I think it comes down to black characters and women in a prominent role. For all the brilliance of Peter Jackson’s adaptations, there isn’t a black character, and the women are mostly background characters.

I’m hugely hesitant about watching a movie/series adaptation of a great book. So many times I have got burnt, it started with Little House on the Prairie. I only watched Lord of the Rings after several people testified that it’s not an abomination of the book.

I think the Éowyn part was inevitable. You can’t have a mainstream and commercially successful movie without a notable (and beautiful, if not sexy) female character. The Tom Bombadill part was only possible in an animation movie. I just can’t visualize actors and normal cinematography depicting those stories.

I’ve noticed the people in Rings of Power are the most fickle ever, swing voters by heart that are incredibly easily swayed. I’m guessing in their world Scholz or Truss would be considered master political orators.

The dweller is that dude that looks at craters and then stares creepily.
I think Isildur’s sister will turn out to be Sauron and then the internet will explode.

The group of mystic looking people who showed up to investigate the crater, the show is calling the leader of that group “the Dweller.” The character was prominently featured in the teaser trailers and I think a lot of people assumed it was the Annatar version of Sauron, but now the character has been introduced Im not so sure.

The Adar suggestion is an interesting one. The death of that character is already meaningfully changed from the books so I guess I wouldnt rule it out.

I don’t know any of the characters names, so this is going to be hopeless.

@Mascot The Kingdom Elendil will go on to set up in middle earth is not related to the kingdom this new character is supposedly the ruler of. We don’t have to worry about how their timelines as kings of their respective kingdoms intersect, but I agree that that guy is a good shout at becoming one of the Ringwraiths.

That was my take on the Adar situation as well. It was like they were acknowledging the likely fan theory and shooting it down. To clarify though, the class of being from which the wizards and Sauron can basically pick any physical form they want to, and Sauron was known to have more than 1.

to me its more simplistic and innocent than that, there might be a tiny bit of the audience that are that concerned about race that it affects their stance, but i think the majority are above that now, especially in geekdom(meant as complimentary)…

basically, its the internet and the age of picking shit through everything…

but i think the majority are above that now, especially in geekdom(meant as complimentary)…

I think the evidence of the post-gamergate era suggests otherwise. I mean, one of the driving beliefs in the “gamer” community is that a cabal of [not sure who] and the game designers are colluding to remove white cis men from game as a prelude to doing so from society. I know lots of people are inclined to ignore gamergate as a silly niche thing that has no baring on the real world, but the throughline from that to the worst of the Trump era is very clear, 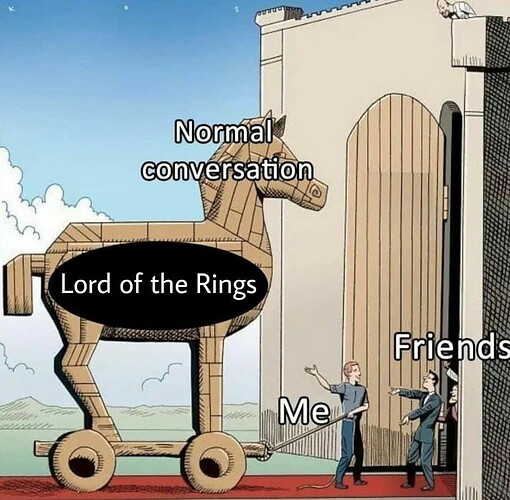 i didnt even know gamergate was a thing.

TBH I’ve been thinking to myself why nobody is talking about people and not fairies and elves?

Mrs CDO and myself like a good crime series. I hesitate to recommend them as I (or Mrs C) has usualky worked out the ‘Whodunnit’ before it’s finished.