Who do you wish to sell 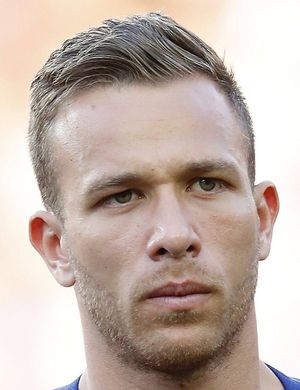 well…you get the hint

Melo was the wrong choice, but he came late in the day after the club appeared to realize it had to do something, after mismanaging the situation.

He worked as hard as he could to try to get into the reckoning at Liverpool, and unfortunately broke down. If we do see him in a Liverpool shirt, good luck to the fella.

I doubt we’ll see him in a shirt more than a few times… If you look at his YTD here (for £4.5mil loan fee!!!) he’s made three appearances for a total of 166min before requiring surgery. this is his annual pattern, plays 6-8 games and injures himself. even going back to Gremio.

Makes Naby look like Superman. it’s shocking how much this guy has been injured and that we even contemplated taking a punt on him.

Weren’t those primarily due to a recurring injury of some sort?

Weren’t those primarily due to a recurring injury of some sort?

Links are there for you to investigate if you wish.

To be fair, that doesn’t say a lot.

I think it says a huge amount.

Most of the midfielders on that list were a total waste of money.

That’s seven of the ten most expensive midfielders of all time were flops. This is hard to get right, and it’s something to bear in mind next time some internet fan is trying to convince us dropping £80m on some midfielder off half a decent season in a poor league is a ‘no brainer’.

What Chelsea have just dropped on Mudryk is not only fucking idiotic from their point of view, it’s terrible for football.

Given how bad our midfield was shit offensively and defensively, could it be due to a system issue rather than a personnel issue?

I’ve done that before, took me a long time, and can’t remember what I’ve found. I’m not that committed sadly.

Interesting evaluation considering your evaluation of Keita and so far Nunez.

Fact remains that almost half of the 50 most expensive transfers ever were either flops or didn’t really turn out to be what was expected, or a bit overpaid.

Interesting evaluation considering your evaluation of Keita and so far Nunez.

In terms of who to sell / let leave I would look at who is a core player and who is fringe. We have to have 8 homegrown players in the squad so having a fringe player that is regarded as home grown, for example Nat Phillips, means that they can continue to provide cover to the team without taking up a slot that could be used by an overseas talent.

Given the effect of Brexit on contracts for talented young players who are not from the UK or Ireland, the pool of top homegrown players is going to rapidly dry up (and be hoovered up by the oil money clubs).

I was saying we should flog him last summer. I also thought we needed a significant overhaul but I recall that most on here felt it was crazy to break apart a team that were 2 games away from a quadruple. Unfortunately we are now going to be retooling from a position of weakness instead of strength.

I certainly wouldn’t mind moving on one of Gomez/Matip and bringing someone more reliable in. As in a better defender than Gomez or someone more younger/fitter than Matip. They both had quality periods for us, some more, some less. Don’t want us to “carry” them for a decade, we have to draw the line somewhere.

I certainly wouldn’t mind moving on one of Gomez/Matip and bringing someone more reliable in. As in a better defender than Gomez or someone more younger/fitter than Matip. They both had quality periods for us, some more, some less. Don’t want us to “carry” them for a decade, we have to draw the line somewhere.

Anyone know what the fee Galatasaray were prepared to pay for Phillips? I did see a fee mentioned on twitter but don’t believe it way too small.

Don’t know, they bought in a CB from Sassuolo on loan with obligation to buy under certain conditions. Sources say that we value him at £10m, though that will probably be including bonuses. Will have 2 years left on his deal this summer.