Ok, well I guess I’ll give this a go and risk Mascot’s wrath

Great performance today, and especially stoked for non-regulars like Elliott and Tsimi.

3 points and clean sheet again. All that matters for the first few games. Happy for Elliott getting the whole 90, looked sharp and up for it. Tsimikas was brilliant, nothing more you can ask off from Robbo’s deputy. And there’s more to come from him. Alisson top drawer and both our CBs as well. That Trent assist was a peach. Thiago song at Anfield finally made for a wonderful evening.

A bit scrappy on occasions, but solid, confident performance overall.

A comfortable win in the end but not we should have won the game much earlier, only 36 more wins to go , onwards and upwards top of the league. 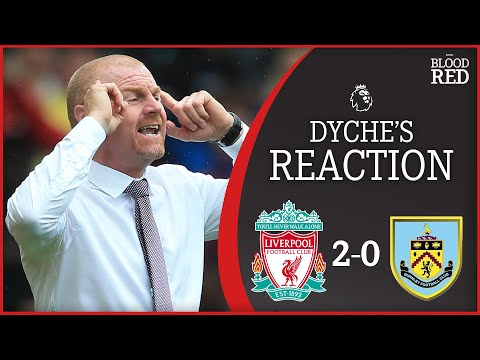 SHOULD HAVE HAD A PENALTY? WTF? IS HE FOR REAL?

I’m going to admit that we got the bulk of the ref decisions our way today. Not saying it was even close to a penalty, but many of the other decisions show that an Anfield crowd holds the refs accountable. Compare that to how we got Absolutely. Nothing from the refs last season home or away.

It must have been 2 or 3 to 1 our way on the free kicks. Would have preferred it to be 99 to 1 in favour of us just because it’s Dyche and his leg-breaking band of cunts.

I think I vaguely remember that…

Like vaguely as in I’m pretty sure it happened but I can’t confirm.

Massive shout out to Ali, VvD, Joel and Hendo.

I would say we didn’t first but second we did, I think Dean did the classic 50/50 thing.

Lots of very good performances, but above them all was an18 year old who took everything Burnlugby threw at him, picked himself up and went again. What a home debut, what a player.

SHOULD HAVE HAD A PENALTY? WTF? IS HE FOR REAL?

Alot of the guff he spouts goes under the radar or is justified because he’s giving the big teams a go. Him and his team are basically Atletico-lite without the footballing or managerial talent. They didn’t injure anyone today but that ‘performance’, and that’s truly what it was, was vomit inducing.

Professional if not eye-catching, but the points matter. Thought Harvey was really good, pre-assist for the second goal IIRC.

Anyhow I went with Tsimikas, TAA and Jota.

I think we were patchy but we attacked with intensity in the periods when we were good and that was something we weren’t doing last season for the most part especially when we were awful for that 3 months.

Burnley to be fair seemed to be more attacking and that will take others by surprise but we dealt with it, that final 5-10 needs to be better managed mind, pass to feet and people in space, too much expansive exploring stuff that can lead to danger.

Liverpool manager Jurgen Klopp, speaking to BT Sport: "We always had to be ready for a proper fight and we were today. You saw these challenges with Barnes and Wood and Virgil and Joel. I’m not 100 per cent sure if [officials] are going in the right direction with these decisions. It’s like we’re going 10 to 15 years backwards. The rules are like they are, but you cannot defend these situations. That’s how it makes the game really tricky.

"I don’t think it’s right, but I cannot decide these things. I heard about leaving the game flow, but now we have these situations. The second goal from Brentford [against Arsenal on the opening day] must be a foul – you cannot clip the arm of the goalkeeper and say, ‘that’s football’. I think maybe we have to think about it a second or a third time.

"The message now is let the game flow, but nobody exactly knows what that means. I like decisions that favour the offensive team, that’s fine. But we have to stick to protecting the players. We cannot deny that. If you like that sort of thing, watch wrestling.

“In a lot of moments, we played a brilliant game without scoring. In all the other moments we had to fight incredibly hard. We won it and nobody got injured.”

What just 2-0. That’ll teach me to miss matches and not know why we didn’t win 10-0.
At least we have another clean sheet in the bag.

Liverpool captain Jordan Henderson, speaking to BT Sport: "It was the result we wanted. The performance was good at times. There are still places we can improve of course, but overall we’re delighted. The fans are back, we’re delighted to have them and it’s important we got the result.

"[The fans] keep you going at times. Burnley are a good side, we knew that before the game. They made it difficult with set-pieces in behind but I thought we dealt with that quite well and scored some good goals.

"I think the second goal is important. If it’s 1-0 in the last 10 minutes they could go long and it can be really difficult. The second goal was important for us to kill the game a little bit.

“Without the crowd it’s different. Football was totally different last season, not only at Anfield but in general. Now we have the fans back it’s a different ball game. Hopefully we can make it a fortress.”

On Diogo Jota: “He has the magic touch. Around the box he’s lively. He’s been outstanding since he’s come in and hopefully he can continue.”

As great as it is having VVD back, especially for defensive set pieces, I thought Matip again today was magnificent. So cool under pressure, uses the ball very well and is comfortable in a 1v1. By comfortable I mean doesn’t get sucked in too close but stands off waiting for the attacker to try beat him then just nicks the ball away. Love him.

Thought first half Elliott was trying too hard and a bit slow releasing the ball but second half he grew into the game more and he must be thrilled with his debut.

Our full backs did well for the majority and got in some great offensive positions to provide assists. And the match wouldn’t be complete without big Ali making a vital contribution.

One more thing, that second goal was a thing of beauty.

For motm I went for:

Liverpool goalscorer Diogo Jota to BBC Match of the Day: “I scored in a friendly game here but officially it’s a different feeling – what it counts for, and I think it was a great way to start my first full Anfield campaign.

“The atmosphere is massive for us, I’ve played here as an away player and I know what it feels like. The fans are really important for us, we need to take advantage of that and I think today 2-0 was a good result, a clean sheet and the team is improving, and that’s the most important thing.

“The first goal is always the hardest in a game, most of the times it is the one that unlocks the game and that’s what we want to do. If it comes in the first half, that’s massive for us because it gives us the opportunity to control the game differently."