76’ Takumi MINAMINO on, Diogo JOTA off

76’ Jordan HENDERSON on, Alex OXLADE-CHAMBERLAIN off

84’ Tyler MORTON on, Thiago ALCANTARA off

Two changes for the Tricky Reds today, after the disappointing defeat at West Ham before the international break, with Robbo and Hendo replaced by Kostas and Thiago respectively.

The game took some time to get going, with neither side immediately settling into their flowing best, and Mo being flagged offside on a promising early break. Ramsdale thwarted Mané twice- the first shot straight at him and the second an excellent immediate reaction- and Salah in similar fashion a few minutes later, with another double save. The Arsenal custodian also tipped Trent’s shot over.

Just when it looked as though the highlight of the first half would be some handbags between the two managers, for which both were booked, the home side took the lead in the 39th minute. A series of Liverpool free kicks during the half had amounted to nothing but this time Trent swung in a beautiful cross to the far post and Sadio darted between two Arsenal defenders and headed powerfully back across goal, past Randdale’s desperate dive and into the opposite corner. 1-0 to the good guys.

As the players trudged off for their halftime oranges, the Reds had clearly been the better side and Arsenal had barely threatened. Still, it was only 1-0 and that scoreline is, as we all know, a very precarious one.

The second stanza started with the home side on the front foot and it only took them seven minutes to double their lead. Jota, who had spurned a glorious opportunity in the first half, was the beneficiary as Tavares played the ball across the back line without looking. An idiotic mistake by the Arsenal defender and it was 2-0.

The traffic was all one way and Mo finally made it three, after several promising positions had been squandered, after good work by Tsimikas, Jota and Mané. It was a tap-in for our Egyptian king and game effectively over after 73 minutes.

Jota, who had been involved in a clash with Ramsdale earlier in the half, was replaced by Minamino and Ox by the captain with a quarter of an hour left and the Japanese international scored our fourth a mere 48 seconds after coming on, tapping in at the far post after excellent work from Mané, Salah and Trent. A second assist for the brilliant right back.

Young Tyler Morton came on for Thiago with six minutes left, to make his Premier League debut, and that was pretty much that. Alisson had barely been called into action all game and notched up his fiftieth Premier League clean sheet and our visitors’ run of ten unbeaten came to a grinding halt.

Next up is the visit of Porto on Wednesday evening in the Champions League. Jürgen has already suggested that he’s going to field a strong team, with that crucial £2.5m on offer for each group stage win, but, with the group already wrapped up, I would personally field the “B” team and give the fringe players some precious big match experience.

MOTM: Those good people at Vocation brewery in Hebden Bridge. They make some excellent beers and their Love and Hate NEIPA is very hoppy, very fruity and rather wonderful. It’s also on offer for £2.50 at Tesco if you have a club card; maybe Jürgen can buy a million cans if we win on Wednesday…

MOTM is a tough one, Ox?

Silly little Arsenal thinking they could come here and play out from the back.

Just what was needed. It felt like a month since we won in the League (and it was, just about).

Much better. Much more encouraging. Great game and a fucking thrashing for the Arse 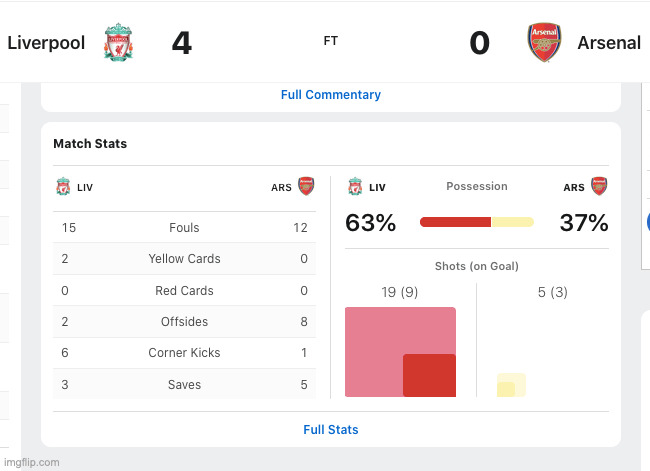 You’ve got the first goal in there twice buddy

Klopp trolling Arteta by putting on a random ball boy.

Maybe can get more game time in the cups.

As easy as it could have got. Excellent performance from everyone. Midfield strong, dominant and back to its best. Fab, Mane two of my MotM. Trent probably third. Ox performed way better than usual, a run of games is doing him really good. Tsimikas and Matip with no nonsense performance yet again.

Happy days, 4 points behind isn’t a lot. Just win few games in a row from here on and it’ll all look good

Brilliant game all-round. Defensive strong, perfect midfield balance, and the forwards were on fire, especially during the second half.

MoM for me is a fight between Big Fab, Trent and Jota. All three were brilliant, but so were the others too: Thiago, Mané, Tsimikas, Mo, the central defenders…

Maybe a bit harsh on Mane and Salah but I thought MOTM was between Trent, Thiago and Fabinho. I’d go with Thiago for the ease in which he passed it around Arsenal and found the passes between the lines, whilst also being excellent off the ball. Good defensive effort from Chamberlain in the first half, shame he couldn’t match his energy with quality in the final 3rd. But definitely a step forward for him.

Mr Lego head is clearly a graduate from the Pep Guardiola school of oddballs. Why is he pretending to be hard?

Easy win against a mediocre side. Perfect saturday night viewing.

MOTM: Those good people at Vocation brewery in Hebden Bridge.

Some of my mates are on the piss there today. Having a whale of a time!

MOTM is a tough one, Ox?

Wouldn’t say MotM but he was very effective in this game. There have been flashes of his old self in the last few games.

Excellent from start to finsh.

That also includes the opening 30 minutes. That was the period where we were probing. Just like in a boving match or chess game, need to do that at times before we turn the screw up a level.