26’ James MILNER off, Curtis JONES on.

64’ Alex OXLADE-CHAMBERLAIN on, Naby KEITA off

77’ Sadio MANE on, Roberto FIRMINO off

I mean, never in doubt.

Two changes for the Tricky Reds for today’s trip up the M62 to face Ole’s plucky underdogs. Ibrahima Konaté replaced Matip, perhaps due to his superior pace, and Sadio was surprisingly benched in favour of Diogo Jota. The home side were unchanged following their comeback against Atalanta in the Champions League midweek.

The first chance fell to Fernandes in the third minute, after the highly original “Sign on” chants had already started, but he slashed high, wide and handsome from the right of the box. That is probably the first time the words Fernandes and handsome have ever appeared in the same sentence.

A few seconds later, the visitors took the lead. A nice passing move from the back eventually saw Salah slip the ball through to Keïta and the Guinea international sldefooted calmly past De Gea from eight yards. 1-0 to the good guys.

And it was nearly two soon afterwards, as Naby found Bobby but the brilliantly-toothed Brazilian could only drill his shot straight at De Gea from a tight angle. Rashford tried his luck from 25 yards but his low shot went narrowly wide; Alisson had it comfortably covered anyway.

The home midfield and defence were all over the place and Jota made it two in the fourteenth minute. Naby might have shot from the edge of the box but instead found Trent on the right; Diogo was on hand to tuck the ball home, unchallenged, at the far post.

Ronaldo blazed over from the right of our box and Shaw cut a drilled effort narrowly wide from the same flank; in between, Naby received some on the field treatment but was able to continue.

It was then Milner’s turn to receive treatment, having slipped and possibly injured his knee. Curtis Jones made his own from injury as Millie limped off in the 27th minute.

Having gone two up so quickly, the Teds slipped back into the same old habits that proved their undoing in Madrid midweek. We sat deep, inviting the home side on to us, and started giving the ball away unnecessarily.

Greenwood had a rasping shot turned behind for a corner; at the other end, Firmino couldn’t quite turn in Naby’s low cross/shot and Mo was thwarted by De Gea. Jota also narrowly missed.

Robertson was at full stretch to nick a deep cross off the waiting Ronaldo’s head; a bit of playground football in the Liverpool box came to nothing. Rashford rolled a tame half-volley straight at Alisson.

Mo made in ten games in a row with a goal as he tucked home in the 37th minute; after good play in and around the edge of the United box, Keïta crossed to the near post and the Egyptian was on hand to overtake Didier Drogba as the highest goalscorer in Premier League history from the continent of Africa.

And it was four on the stroke of half-time, as Mo drilled in again from the right of the penalty area after clever work by Firmino, Keïta and finally Jota, who teed up our top scorer to drill home inside De Agra’s left hand post.

As the players trudged off for their halftime oranges, the Reds were four goals to the good despite not even being at their best. Only a miracle or some very generous officiating could have come to the rescue of the home side.

The second stanza started with Fernandes receiving a yellow for chopping down Jones; the home players’ frustrations were starting to surface.

Then Pogba was dispossessed by Naby in the centre circle; Henderson arced a beautiful pass with the outside of his foot into Salah’s path and the Egyptian raced clear to make it 5-0 in the 50th minute.

Ronaldo got one back a few minutes later, cutting inside Trent and the otherwise excellent Konaté to curl inside Alisson’s lefthand post; VAR had a look and the goal was disallowed.

Maguire was booked for chopping down Jota in the United D; Salah hit the free kick straight into the wall. Things got even worse for the home side on the hour mark, as Pogba lunged in studs-up on Keïta. Following a VAR check, referee Taylor had no option but to send off the enigmatic French midfielder. Naby was stretchered off and Ox replaced him.

The game was all over and it was just damage limitation from them and making sure we kept a clean sheet. Trent had a fierce drive tipped over by De Gea and Sadio replaced Bobby with fifteen minutes left to play.

Cavani hit the bar- I bet a few United supporters had already done the same thing by this stage- with seven minutes left and the rest of the game just petered out after that, although Jones might have made it six in stoppage time. 5-0 and record win for the Reds at the home of their oldest rivals.

Next up is a short trip to Preston on Wednesday, to face the Championship side in the Carabao Cup. Our hosts lost 2-0 at Blackpool on Saturday and we should be able to rotate a fair bit, although we barely have any midfielders available, and still comfortably see them off. 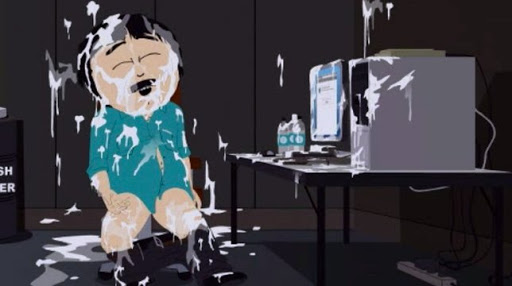 We fucking smashed them… for they are fucking shit!

Word of the day is

Naby played really well. Here’s a MOTM nod to him in appreciation and sympathy. Come back soon.

That will require few home brew pints to celebrate

I’m pissed. Two weeks in a row, tuned in to watch a Liverpool match only to watch a training session for 90 mins

We went to Old Trafford and scored loads of goals. Utd played like a team who’d quite like a new manager. I sort of felt sorry for them. Or I did until Pogba decided to take put his frustrations on Naby’s knee. They can just fuck off, really.

Absolutely beautiful. Gulf in class. Every player gave his best. Konate justified his selection with some beautiful game reading and intercepting their threats early. Jota and Bobby superb and midfield class. 2 changes in midfield and we yet controlled and dominated. Naby was carving them through the middle. Relentless pressing from our players. They just couldn’t live up to that.

I hear United have never been 4-0 down at half-time.

It’s a shame, but I think Ole’s time will soon be up.

It’s not even a fair fight lol, Total domination the full 90min. It might have been different if Fernandez pop that one in early, but really afterwards was total dominant by us. If FSG is still penny pinching over Mo’s contract after this, I am back on FSG OUT Bandwagon lol. What a performance from Mo, but in reality I think we were just too good for them. It’s pretty obvious that Ole will be gone and their players have stopped playing for him.
Overall, fantastic win from us, they didn’t come ready for the fight and we walked all over them… On to the next game, time to rest up some players for the league cup and prepare for the next weekend battle.