This match has always been an interesting one to watch for me, as I have a standing bet for a bottle of rum with a Grenadian friend of mine who lives close by.

Last 5 outings, he’s had to give me four bottles. By what the media is saying, I may have to send one back over the Fraser River to him. But fuck the media, we are Liverpool La La La La La! We rise to the occasion! I’ll be camping this weekend as it’s a bank holiday on Monday, hoping to be fishing for kokanee and salmon as the run is full-on right now. If you’re in the area, come by Kawkawa Lake for a beer or 6.

Am expecting a full-strength squad to come out guns blazing on Sunday and I’m literally betting on a win at home.

Arsenal are having a flying start to their season, Arteta has them playing some attractive football. But they haven’t played a team of quality yet and have lost 3-1 to United as well.

Take it from here, ladies and gents. Come on you Reds!

Here’s a detailed summary how this match will pan out from start to end, you ready? Brace yourself for this one…deep breaths guys, deep breaths.

The ref will blow the whistle for kick off…and basically we’re gonna fuck them up, ref will blow up for full time & life will be good again.

I know loads of Arsenal fans, so let’s twat them so that I can take the piss out of them all.

Everything is setting up for an ugly, minimal away win.

Unchanged team? Klopp might be tempted to play Jota as the nine and have Bobby sitting in the middle of the three.

the last match split between Fab and Henderson was a bit confusing. Hate to think that Thiago would play nearly a full 90 vs Rangers and not play against Arsenal…but was he giving both Henderson and Fab a break after an international break?

I’m not sold on the idea that we’ve changed to a 4231 but I wouldn’t be disappointed.

Interesting, Firmino and Jota is defensively better then Nùñez and Jota but not as good in the air. Decisions decisions.

We got Oliver as the ref.

As for the match, not optimistic, will Klopp play the ‘new’ system and how will it go against a much better side then Rangers or will we go back to the old one with all his defensive problems.

Hope we steal a win but …

Not sure what to make of this.

Klopp made three changes to the starting XI against Brighton; Fabinho, Carvalho, and Firmino made way for Nunez, Jota, and Diaz. I expect similar rotations against Arsenal and I expect Fabinho and Firmino to return.

Arsenal will not be docile like Rangers and they will come at us in full force, from the beginning. Our defense will be put under the cosh but our forwards will also get spaces. Composure will be the key element.

I have neighbours who are Arsenal fans and work with A few Arsenal fans most of them are confident they will beat us so for gods sake redmen smash these cunts and make them shut the fuck up.

No predictions from me until I see that we’re sorting things out, so just com’on, com’on!

I think playing Arsenal we need Henderson, Fabinho and Thiago on the pitch together, 442 would be my option. 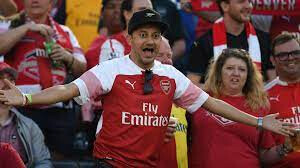 I remember so fondly Fowler ripping them to shreds. More of the same please. Looking at Darwin to take off. Think he can beat God’s hat-trick time? Would be a hell of a statement and what are records for if not for beating? Maybe that’s just the cricketer in me.

Last season, we would have brush them off. But currently, form and morale, they surely are the favorites to pull off a win. But Liverpool being Liverpool, this is the type of game to go out, dig our heels, pull out a great performance and win and unite everyone again and lift our spirits. It’s either 2-1 or 6-1 to us with us winning 27 throw ins

I will be counting the throw ins.

I’m not sold on the idea that we’ve changed to a 4231 but I wouldn’t be disappointed.

Curiously I heard Klopp describe Tuesday’s formation as a 4-4-2. Not sure if he was being serious or just channelling his inner Mike Bassett.

Surely talk of beating God’s record should be considered blasphemy?