It’s back-to-back games against teams from the Midlands for Liverpool in the Premier League as the reds host Aston Villa this weekend. In what the media are calling the Purslow Gerrard derby*, Liverpool welcome an Aston Villa team on the back of a strong recent run of form following the appointment of the legendary former Liverpool player.

In the 11 Premier League games before Gerrard’s arrival at Villa Park, the Villains had amassed 10 points and found themselves just above the relegation zone in 16th. In the 4 games since, Villa have gained 9 points with much improved performances with wins against Brighton, Crystal Palace and Leicester City, last time out, rising to just inside the top half of the table. Although they also lost 2-1 to Man City in that run they could easily have taken something from that game and have generally looked a much sterner test under Gerrard.

The Kop will surely give Gerrard a rousing salute but then sentiment will need to be put to one side.

Following Chelsea’s defeat to West Ham last weekend, the reds now find themselves in 2nd, just a point behind City who are home to Wolves in the day’s earlier kick off. As such, Liverpool are likely to need a win to ensure that gap doesn’t get bigger. Chelsea face Leeds at Stamford Bridge, also at 3pm.

Liverpool go into the game having become the first English team to win all 6 of their Champions League group matches, with the added luxury of having rested several important first-teamers who will surely come back into the line-up on Saturday. The reds have reported no new injury concerns so Jurgen ought to have nearly a full squad available - the only exceptions being Harvey Elliott, who continues to recover from a serious ankle injury, and potentially Bobby Firmino, for whom this may be a game too soon following a hamstring injury.

Villa had no mid-week fixtures at all so both teams ought to go into this fixture relatively fresh with the reds hoping that they can continue to keep things tight at the back, whilst taking their chances at the other end. 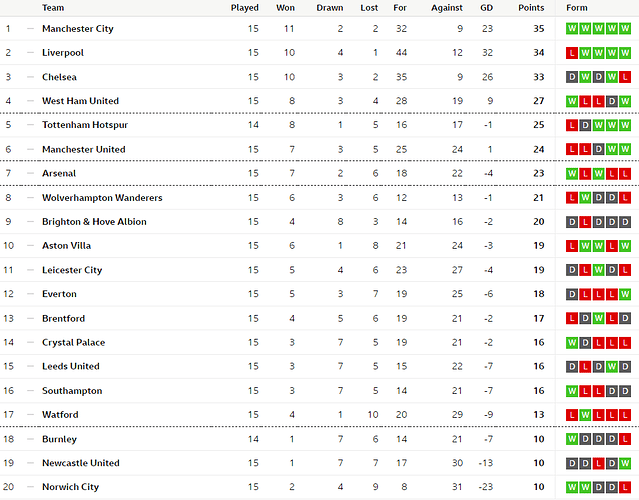 I’m very much hoping that Wolves will prove that last weekend wasn’t just us being rubbish, but more that they’re really just a well-organised team. Take some points off City and all will be forgiven.

For us, I’m not sure what else to expect at all. Hopefully we will at least win with no injuries, not too fussed about the nature of the win.

Going to be a tough one, Villa on a good run and morale is high with Stevie in charge. Wont be no push overs. The 11 is easy enough to predict imo looking at who was rested yesterday.

Konate impressed me, Matip has been a 6/10 for the last two games. Think with our strength now in CB and Matip needing regular rest with his injuries we might aswell give him one now. Konate can deal with Villas pace up top also with Watkins.

Same lineup as the last PL game (actually Milner might start for Ox). Time for Mo to pad more stats, just don’t leave it till injury time. The bench will be looking a lot stronger.

I think that team is 99% nailed on. Would be good to see Keita, Milner and Jones on the bench.

Almost picks itself at the moment barring any injuries.

Konate played his best game I’ve seen last night but it’s still Matip for me. With rotation required for the next few weeks mind I am happy to see him start more.

Anfield crowd needs to be on it, give Stevie applause but don’t let up on his team after that.

Got a feeling this will be a cracker.

Only two questions
Matip or Konate?
Hendo or Ox?

The rest is pretty assured.

I hope this is Stevies last loss for a while.

We don’t know the fitness situation of the players who didn’t travel, but if everyone is fit I’d go for the team that Mascot suggested.
Ox will get some time no doubt.

Looking forward to seeing the crowd welcome Stevie. I’m sure they’ll let him know how proud we are of him. But after that, fuck him and fuck his team

I’m glad this is a home game, don’t fancy going to Villa park whilst they are still riding the new manager wave plus have the extra motivation of the ‘stepping stone to Liverpool’ chat.

I still expect it to be a bit of grind, but hopefully we get it over the line a bit earlier than last weekend.

Only two questions
Matip or Konate?
Hendo or Ox?

The rest is pretty assured.

I hope this is Stevies last loss for a while.

Hendo or Ox isn’t much of a question. Though Ox is improving he still hasn’t put in a performance anywhere close to Henderson’s at Goodison.

Matip or Konate is a trickier one, though Matip will probably get the nod.

This is going to be our toughest game in a while.

Well, after excelling at Goodison, Henderson was not particularly good at Molineux. I think that was partly due to tiredness after Goodison performance (seems Klopp should have injected some fresh legs in the midfield for the Wolves game).

But after being rested for a whole week, both Hendo and Thiago should be fine and starting, unless Klopp feels Ox is more suitable for breaking Villa defence. In any case, some rotation (particularly in midfield) will be needed between the following two games against Newcastle and Spurs, meaning enough game time for Ox and Millie as well.

Well, after excelling at Goodison, Henderson was not particularly good at Molineux. I think that was partly due to tiredness after Goodison performance (seems Klopp should have injected some fresh legs in the midfield for the Wolves game).

Ox hasn’t been particularly good in lots of games. Henderson is the better player, our captain and will be well rested. Provided he’s fit, he plays.

The best 11 like last weekend, no sentiment about Gerrard just give them the treatment we gave utd and arsenal.

Line-up’s clear already but if it’s 3-0 by 60’ and we bring on Tyler for Fab, Ox for Hendo , and either Naby for Thiago or Div for Mané, I would be delighted. Even if it stayed 3-0.

I love and respect Stevie as if he was family but I have no time for sentiment in this one, he’s just another opponent come Saturday. It’s about pocketing all 3 points.

I only watched the second half of Villa/LC last weekend but I read Leicester were getting at Villa in the first half and opening them up fairly easily, just couldn’t take their chances.

Agreed that team picks itself as there’s no reason to change. Period.

Although it’s so good to have the whole squad back just in crucial period of run of games. Hopefully this will allow Klopp to tactically tweak as needed in game with multiple different options available now.