We look old, tired & injured… We needed a bigger refresh this summer, a huge opportunity wasted by Klopp and FSG.

Back to basics top to bottom.

If the seniors (all legends) have lost their edge, their legs, their touch, the will to fight for every ball… 3 games is enough time to give them a chance, I’d be making a statement and telling them it’s not good enough.

Injuries are the only reason Van Dijk, Fabinho and Firmino are starting…

Get some fucking pride lads. Shouldn’t take conceeding a goal to try to play simple football with the most basic of needs i.e. Desire and Fight.

Agree with the team. Can’t see SVB play unless it’s at centre half with Joey at right. Bobby cannot play also. Throw in Bajetic into the midfield and play Fabio up top

Don’t be silly with that team.

Sepp? Rather see Milner there.

Elliott and Carvalho in a midfield 3? Lol.

Sticking with Firmino the ghost? Nah.

Yes why not, a starting midfield with Milner on it does not work. Klopp could go with

too but I like your idea that’s for sure.

Onwards and upwards. Best fit team available, stand up and be counted lads. Nice easy 3-0 home win and we start our challenge.

Naby, get on the frucking pitch PLEASE

Trent is the least of our worries so he definitely starts. Agree with starting Carvalho, but maybe in the front 3? 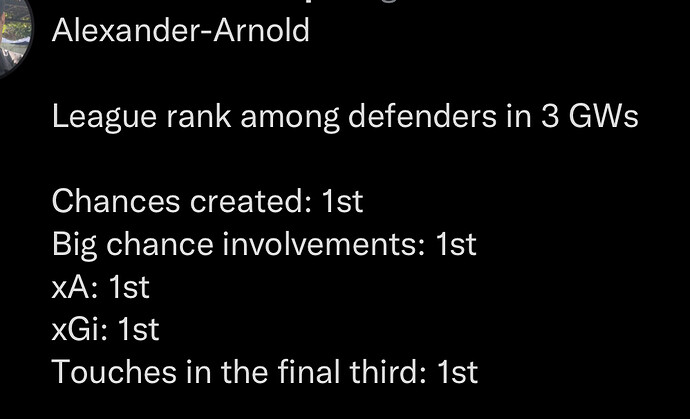 And people want to drop him for an untested youngster

Imagine putting up stats of a defender…and not having a single defensive stat.

Are people that thick?

Thinking of posting up few shooting and dribbling stats of Alisson this season.

I’d bring Fabinho back in, start Tsimikas at left back and give Carvalho a chance through the middle.

Hell he might flop or he might give us something to kick start our season, same mistakes and the same easy way to play. Parker will play similar to Palace and Fulham. Anfield is key in trying to drive our players on.

How many games have VVD and Gomez played together? I feel like the defence isn’t communicating with each other. Sticking Fabinho in front of them is a must. The other midfielders should be Elliott plus one other. I’d be tempted to go for Carvalho but that might be adding to the inexperience.

We got one of the blind squirrels, lucky us …

I’m not sure you’ve been watching Liverpool over the past few years. Last night you were wanting United to win so will continue to take anything you say with copious amounts of salt

I don’t really care as long as its not Kav or Tiernay nowadays.

Oliver is supposed to be great but we seem to lose every game he does for us and it comes with a number of decisions.

What a terrible start to the season. I’m not worried about the results and the standing, but I’m freaking out with our performances and attitudes. Forget about the unbridled ferocity of the first couple of seasons under Klopp, we didn’t even have the controlled aggressions of the last few seasons. We looked unimaginative and uninterested. Nine days and seven days breaks between matches, we looked like we played 10 games over a week.

I would say maybe game after game would help us but the issue is can the squad hold up to that level. I am glad we aren’t playing on a Monday it seems somewhat a bad day for us going back through the years, littered with poor performances.

A proper kick off time this is.

Anyhow as pessimistic as I was about Man Utd I am actually positive about this.

VVD and Gomez at the back. Need to build rhythm with a string of games together to get back to the slick offside machine while we wait for the other two CB to recover from injury. Fab positioned in front of them.

TAA for sure at RB. Sepp van den Berg is way too raw and to me is a CB plying his trade at RB for game expereince. Playing him ahead of TAA is like choosing new to the league Bjorn Tore Kvarme ahead of Rob Jones.

Andy and Tsimikas can be a toss of who does better in training. We’ve chopped and changed too much at the back, with injuries hitting the midfield, and Darwin doing a Suarez special. Find a way that allows Mo more freedom.

And 0-0 at HT is perfectly fine. Get in the right positions, with the right attitude and over the course of 90 mins should then come out on top.

And it’s finally a Sat 3pm kick off. A traditional kick off time to get back into routine. Oh, and those at Anfield need to be on top of the ref from the start. Make the ref aware when they take a few secs extra collecting the ball.

5 goals conceded, at least two from failed offsides traps around about the halfway line. A few more of those that didn’t go in (missed or saved). Our once lauded defence and hardworking midfield, is nowhere to be seen. We’ve played 2 teams that will be in the bottom half of the tables, 1 team that was on life support, we just defibrillated them.

I expect 1 new injury during the week. I suspect baby is in fact a baby, even I have now lost all hope in him.