Well of nobody opens this topic I will, what can go wrong after two draws …

We need a win, plain and simple and I go with:

We should wipe the floor with them, provided we stop beating ourselves.

To me this is a must win, not because its going to win us any championship or titles at this stage of the season, but if they win, they are going to leap frog us in the league and you can guarantee their shite manure fans are going to claim that they are using us as a platform to turn around their season and that their season starts now. I would hate to see that and I just want them to suffer 3 defeats in a row and continue see them tear each other up.

A proper relegation 6 pointer. Can’t afford to lose this one!

Provided we don’t shoot ourselves in the foot, we should win this and if we can find our scoring touch up front, slabhead and the midget should be in for a torrid night against Salah, Bobby and Diaz

Sounds funny but you know until we start getting the points on the board we really can’t be so cavalier after our last two results. 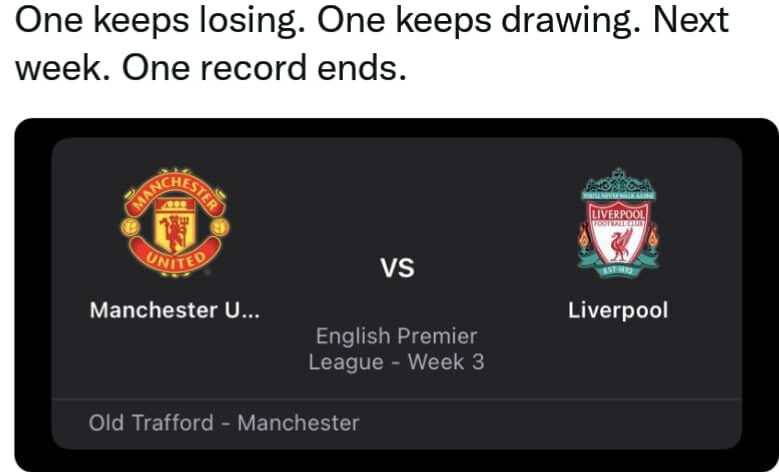 I’m starting to get worried that we are having problems getting shots on target let alone score goals so I’m going for a very conservative 0-29!

Can the thread title be changed to reflect where the match is actually taking place?

Lot of talk about Bobby being the answer up front.
He has been excellent for us, but against Fulham he was quite poor. He just might now be a very effective option off the bench. I think this will see a full debut for Carvalho, with Diaz moved more central.
Hendo to start at 6, I am a big fan of Fabinho but he has been poor as well last two matches. Hendo will love the challenge of Utd.
Keita and Elliot in midfield.
Hopefully Gomez starts at CB.

With a little luck we would be on 6 points. Zaha’s goal was avoidable on Saturday and Darwin was stupid…but we should/could have won the match. Fulham was careless and we can discuss things that cost us all day. Newcastle draw with City, we beat United and they are only 2 points ahead after our disastrous start.

Just the tonic we need.

Time for experience to shine through, so both Hendo and Fab for me, harsh on Elliot to lose his place but with our lack of attacking options I think he will be important from the bench. I don’t think Fab has been quite as bad as some are suggesting, also we need him to play himself into form.

I expect Utd to be far less open than their first two games. Still, they don’t have the personnel or the discipline to pull off a low block like Palace or Madrid did. If they attempt a high press I think we will carve them open.

Joey G must start, he along with Hendo changed the game v’s Palace. If he can stay fit him and Van Dijk will be the best center back pairing in world football again.

If Firmino is not playing, Salah is more likely to be playing up top than Diaz.

But in all likelihood, if Firmino is fit, he will start.

This is the perfect time for this game. Smash another 5 past them. Get us back on track, and cheer this forum up a bit!

Knowing our current luck, they’ll be up for it. They won’t want to be the whole country’s laughing stock for another week, and will want to make amends in front of their fans.

If Klopp manages to find eleven fit players for this one and and we can win it - whatever the score and the manner - I’ll be over the moon. Certainly don’t expect a 5-0 for us this time around.

Well of nobody opens this topic I will, what can go wrong after two draws …

Putting it in the wrong forum??

Knowing our current luck, they’ll be up for it. They won’t want to be the whole country’s laughing stock for another week, and will want to make amends in front of their fans.

That’s what I thought last season…

Well we can always hope for the best. An early goal would help us a lot, as it helped Brentford the other day.

Thanks for fixing that.

This game is what’s known in baseball circles as a “slumpbuster”. We’re going to fucking smash them, because they are fucking shit.

I’ve got absolutely zero confidence in this sadly.