I think there is something cultural here. Jurgen thought nothing of going on TV and telling the assembled journalists that Gini Wijnaldum had the shits.

Hope this gets called off. If we have to go and play with half our first team missing while other clubs have their game postponed then any shred of integrity the PL had is out the window.
The whole thing is already a fucking joke, should have scrapped the lot after Thursday’s games and given everyone 10 days to recover.

Exactly. I was thinking exactly them same thing. At this stage Hendo has either tested positive or he has not, so there is absolutely zero reason not to let people know.

We had the chance to get thursdays game postponed but we didn’t asked to.

I guess that as long as the number of positive cases (and it doesn’t really matter if it’s players or staff) stays relatively low we won’t ask to postpone tomorrow either.

Said this on Thursday night already - I’d take the chance for a point tomorrow instead of moving this into next year.

We already know the PL has no credibility. The fact that they have no plan to deal with this when it has been a major possibility is ridiculous. It isn’t like this popped up in the last week. Even with us missing players I am still confident we can beat Spurs.

So you’re saying it’s just a matter of asking? I’m not sure it’s that straightforward.

JK has never liked the schedule at this time of year and I think he’d be more than happy to see this one cancelled with a Cup game coming up and then 2 more games over Christmas meaning we’ll have played 5 games in 13 days with a severely depleted squad. It’s a ridiculous schedule if you’re missing 5 or 6 players through covid on top of other injuries.
The margins are so tight we need to be playing these sort of matches at full strength, City are at Newcastle tomorrow and will almost certainly win, if they get 5 or 6 points ahead of us it’s unlikely we’ll catch them.

Jürgen already said before, that he would like the match to be played, if possible - so unless a number of confirmed covid cases in the team rises significantly until tomorrow, I expect the match to be played. If not, when will the Spurs play all their matches that were already postponed by today (3 league matches)? Let’s cut them some slack, take those 3 points off them as soon as possible and leave them enough time to prepare better for games with our league rivals.

It is true that we will be (very likely) without VVD, Fab and Jones, according to the latest rumours possibly without Hendo, but Jürgen is capable of finding a solution. Besides, Spurs will likely be without Son and possibly Lucas Moura, who are their main two threats lately.

Hard to guess the team for tomorrow not knowing who tested positive and who not. Without further negative news, back five pick themselves, as well as front three (all same as against the Magpies). The main concern is no. 6 if both Fab and Hendo are confirmed as positive cases. Before the Newcastle match, I would say Thiago starts there in absence of Fab and Hendo, but now I reckon Millie would be the pick to do the job there. Both of them start regardless, because simultaneously using both Keita and Ox would make our midfield just too offensive without either Fab or Hendo behind them, so Keita to start alongside Millie and Thiago in midfield. Alternatively, if Klopp would not be sure, whom to trust as no. 6, we could resort to change in formation to 4-2-3-1, using both Thiago and Milner as double lynchpin.

In any case, even without VVD, Fab, Hendo and Jones, we are a better quality team than Spurs and should have enough firepower to claim all 3 points at stake.

I’m slightly concerned that we cancelled the U23 match, why would that be and with it all at the same training facility I do expect we will see more players out tomorrow.

If we had the team and squad from Thursday then I’m so bothered but if we lose say 2-3 more first teamers then I wouldn’t want us to play frankly.

I still think for a prominent organization like the Premier League that they have not moved to enforced compulsory vaccinations for all players in the Premier League and that the clubs are not even forced to disclose which players are or aren’t vaccinated (are they?). A month or so, I even saw reports that some clubs have like only 50% of their players vax? While vaccination does not 100% remove transmission but shorter transmissible periods means there is a reduction of people exposed to infected individuals, so in a close setting contact sport, any reduction in periods is very important.

See I don’t view it as hypocritical. We are just conforming to the precedent already set. No need to give our opponents more information.

Plus we have been more than forthcoming on our vaccination rate. Also we named who has tested positive. Which is more than any other club. Especially when you look at the shitshow at the Scum

Hope this gets called off. If we have to go and play with half our first team missing while other clubs have their game postponed then any shred of integrity the PL had is out the window.
The whole thing is already a fucking joke, should have scrapped the lot after Thursday’s games and given everyone 10 days to recover.

I agree. I would rather us play three games in a week with our whole squad and them focused on the games rather than being distracted with what’s going on now. We don’t lose that second leg against Atletico in normal circumstances I feel.

And this is purely from football perspective. It probably doesn’t make sense even from how it’s spreading within the teams and from one to other.

It’s guaranteed that any makeup game will be during AFCON so we might as well bite the bullet and play. Only Hendo missing as per last game. TH have score 16 goals this season and conceded 17. Only 4 sides have scored fewer goals, hell even Newcastle have more goals.

They a defensive counterattacking side that barely holds onto the ball, I think they had a game recently s a bottom side, and only had 40% or less possession. They are not match sharp, they might have had a nice rest but as we know it’s games that get you sharp, not training sessions. They also probably have a few players out. I would be comfortable if the only one was Son, the rest are shit when he’s not playing.

I personally think Jurgen and the squad feel that they would carry on unless we were absolutely decimated. As it stands, our front 4 players are fit and firing with Firmino returning. Our defence is missing Virgil but Matip is playing brilliantly and Konate has bedded in well. Fabinho and Henderson is missing in midfield but Keita and Milner are back with Ox and Thiago both fit for a prolonged period now. Any team combination we field is more than a match for 17 of the teams in the league and still a decent enough to face City and Chelsea. This is what depth is for.

Canceling and resetting is all very well and good, and this is just my opinion, but I think Jurgen feels that the league is going to go on at some point, which it is, and someone is going to benefit from the postponements so we might as well try and put the hammer down and get the points on the board. If there is an advantage to be taken then take it.

Ok
Time for a bit of a conspiracy theory.
If you are ever accused you may as well take a chance…

If all three games are played today that means the current top 4 will have played the only matches this weekend.
SKY/BT will have their contracts fulfilled and the decision moves to Boxing Day.
The Christmas schedule is important to the TV companies and maybe just maybe the PL is under pressure to keep certain games going, for as long as possible.

If we win, it will be an inspired decision by the boss not to ask for a postponement.

If we don’t win, it will be the fault of the Premier League forcing us play the game.

Which will it be, I wonder .

If Henderson is out could Morton start? Been impressed with him so far when he’s played.

A trip to the capital as we take on Tottenham Hotspur 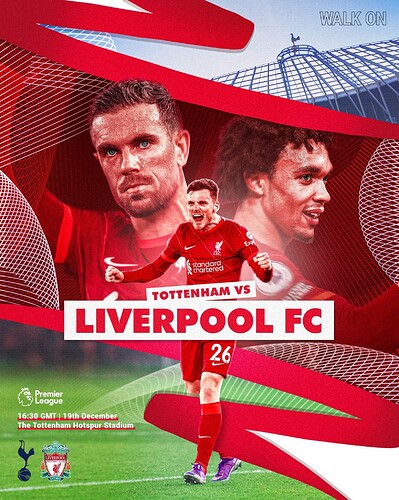