Two away games in a row for Liverpool who stayed 3rd in the table following their mauling of Everton on Wednesday night. On Saturday they go to Molineux to face a Wolves team that had a tough start under their new manager, Bruno Lage. After 5 games they found themselves in 16th place with 3 points having lost 4 of their opening fixtures including against Leicester, Spurs, Brentford, and minnows Manchester United.

Since that initial bedding in phase, Wolves have looked a lot more organised. Of the following 9 league games they have won 5, drawn 3 and lost only once, 2-0 against Crystal Palace, rising to 6th in the table. That, however, was the only game in that run where the margin between the two teams was greater than 1 goal. Wolves have kept things tight at the back and share with Liverpool the 3rd best defensive record in the league, having conceded only 12 goals in 14 games.

Their problems have come at the other end. Only Spurs (11) and Norwich (8) have scored fewer goals than Wolves (12) so far this season. On Saturday, Wolves will face their sternest test of their season so far. Their miserly defence will be going up against the division’s top scorers, with Liverpool having scored 43 goals so far this term. Only City in 17/18 (44 goals) and 11/12 (48 goals) have scored more by this stage in a PL season.

In last night’s draw at home to Burnley, Wolves lined up 5-4-1 with a back five protected by two holding midfielders in Dendoncker and Moutinho. Their threat relied exclusively on the energy of Hwang and Jimenez supporting Adama Traore through the middle. Although they dominated possession against Burnley, having 65% of the ball, and managed 16 shots on goal, only two of these were on target. They will need to carry more of a threat against Liverpool if they are to hope for an upset. They will look to cause Liverpool problems on the counter with the pace of Traore, in particular. In that regard, they will hope that the returning Ruben Neves will provide them with greater progressive passing but he will likely take the field against a midfield triumvirate of Henderson, Fabinho and Thiago that is starting to look the business now they have finally managed to get some game time together.

For the reds, they will hope to continue their current form with another convincing win. 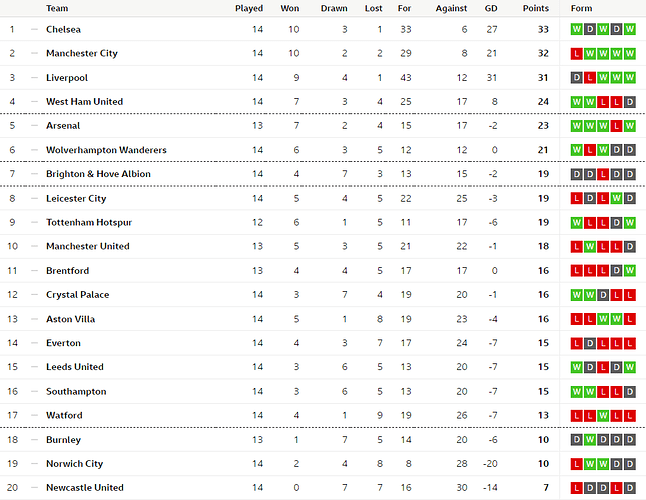 Go the same again on Saturday if everyone is fit. Thiago and Hendo both came off before the end (75 and 83 respectively) last night.

After Saturday, we have AC Milan on Tuesday. That’s where Klopp should look to give lads a rest, before Gerrard comes to town with Villa the following Saturday.

Well, it was bound to happen but we have horrible Chris as the referee.

Btw, Konaté for Matip will do nicely.

Might see some rotation in this one. And then plenty more for Milan. Think Konate and Ox will return. Which of the three midfielders would be rested is difficult to guess. Thiago and Hendo have not been playing 90s, but we cannot rest Fab I think. Also they have returned from injuries so would be good if their time is managed and one of them plays mid week.

Nice selection dilemmas, hopefully Jones and Keita are in the mix soon as well. Would do wonders going into these set of continuous fixtures.

2-1 Half Time we lead. I will let you all know the full time results tomorrow.

Much is made of their run but having looked at it only West Ham can be seen as impressive the rest seem to be against sides in poor form or just poor sides.

I assume we will get the game we expected against Southampton

Anyhow Kavangh is shit but Moss is his best on VAR, I guess it’s because he gets to sit down and have a cup of tea.

Wait… there’s more?! Bring it on. Team picks its self.

One of Milner or Ox for I don’t know which midfielder.

No need to rest anyone. Plenty of room for that in Milan.
Same team as last night.

Unless any of the players from last night picked up a niggle I wouldn’t change a single thing about our line-up. I’d then look towards the Milan game as one where we can rest players and bring back players who have been recovering…ie, Jones, Keita…maybe even Gomez and Firmino if they’re ready.

So same team for me. Then Milan can be:

[A few of you have pointed out that Milner is suspended so I’ve swapped him out for Morton.]

I agree, but think you’re being a bit optimistic about returnees.

By the way, is this an attempt to do a Milan pre-match thread inside the Wolves pre-match thread? If so, it’s an audacious, if somewhat risky, move. I just hope you know what you’re doing.

Wolves and Arsenal are sneaky little bastards, aren’t they. After their respective disastrous starts, they have silently and steadily climbed to decent positions. I don’t see any real need for changes in the starting lineup. Though Ox might feel a bit hard done after a string of good performances.

We need to string together 5-6 wins in a row.

Agree. Same team on Saturday and like your team/bench for Milan except unfortunately Milner who ‘accidentally’ got himself booked and suspended against Porto

I’d stick with the Wednesday side unless there are fitness issues that might lead to anything more serious. Might consider Konate for Matip then again I think you would start Konate against Milan.

Yes same team unless anyone is not 100% fit. Momentum is with us and we need to keep going. Matip, Thiago and Henderson can rest against Milan but in the league our best 11 need to play whenever possible.

Same starting eleven. Momentum going into Christmas is vital, as this three horse race develops.
As others have said, rotate in the CL, keep going here.