Since nobody wants to take responsibility, again, it seems my erstwhile contribution to the pre Match thread starting squad is once again required.

Away goals don’t count anymore, for a start, so will be interesting to see how teams approach it. Inter is unlikely to be too gung ho anyway as we are probably going to seek to dominate the ball as usual. I’ve no idea of their team so will get straight onto ours

The usual back 5 of Ali, Trent, Virg, Joel and Robbo.

I’d like to see a midfield of Fabinho, Thiago and Keita, personally and,

Salah, Jota and Mane get my vote for the front 3

Tough calls in there, options on the bench to be Harvey, Diaz, Henderson, Firmino with Konate and Tsimi to provide the defensive cover. We’re spoilt for choice at the moment, long may it continue.

Can’t remember playing this lot, tbh. Lets rip em a new one so… Allez, Allez, Allez and off you go lads. 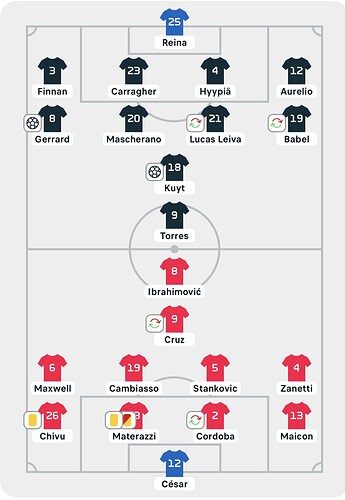 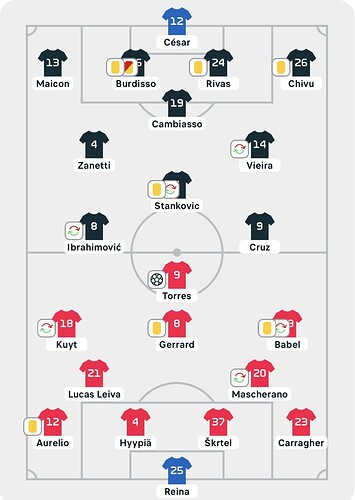 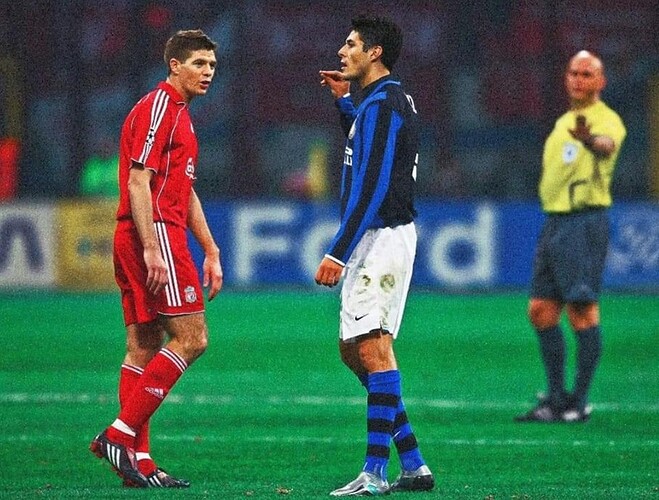 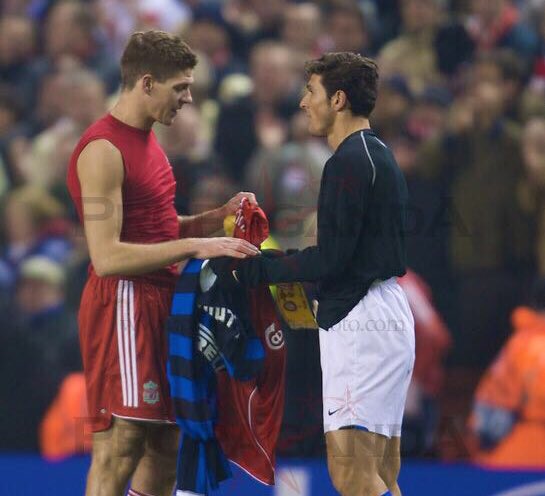 A simple ‘we played them in 2008’ would have worked too, I suppose

They forgot that Inter at home was one of the very first times we flipped Kuyt to the right side and Gerrard formed his new partnership with Torres centrally.

Barella is a big miss, we’ll see if it’s Vidal or Gagliardini who replaces him. They will go up against Thiago on their right and our left side of central midfield. Central battle will be big, with Inter’s system and their key players being right through the spine; de Vrij, Brozovic, Barella, Lautaro. Calganoglu will play in moments of the game as a high left sided CM and of course have the most licence to join support the attacking duo. Hence why regardless of his weaker form lately, I expect us to start Hendo without much doubt. Not like we have another CM in such brilliant form, shape, etc.

It could well be;

I always wondered where Arteta got his inspiration for his barnet. Nice to know its Zanetti.

Stylistically though, with de Vrij being the central CB and Brozovic starting all their attacks from the single pivot spot in that midfield trio, I would’ve liked to unleash a bit of the Bobby medicine on them. See how that’s like. But form wise, it’s very much on Jota, who could also pose different problems with his movements, turns, balance, finishing.

We’ll see if it’s really Matip or maybe we decide that he can’t start this game. I’m going to guess he will play, but that remains to be seen.

Against Norwich at home, I’d expect a few more changes, perhaps half the team or close to it. Someone like Tsimikas, Keita or Elliott, Diaz.

Sadly going to be missing most of this 1 as I’ll be travelling back and forth to Liverpool to view a property!! But will be checking for regular updates on the train.

Barella out the tie will be a huge positive for us. & I love that Diaz is eligible to play.

He’ll have a third goalie (Adrian) instead of a sixth forward. I hope Henderson can recover from the leg issue. If not, who comes into the squad? Morton?

My favorite time of the year, love knockout footy.

Italian pundits shouting about all of our “supposed weaknesses” using the high line. News flash, If you get called offsides that doesn’t make it a “chance.”

Expecting this to be a tight affair but excited to see Salah terrorize serie A opponents again.

I’m guessing Milner gets the nod ahead of Hendo since Klopp usually goes with experience in these big away ties. Mane gets dropped as well.

Expecting us to take a two goal advantage to anfield I can’t see them being anything more than a stepping stone on our way to number 7.

Think Konate gets the nod here, 3 games in a week is a bit too much for Matip

Happy with any lineup that starts tomorrow. 5 changes possible and we will have some good options from bench.

For the rest of the season we don’t have many games left where we can rest many players. The FA Cup and maybe the league game vs Norwich at the weekend might give Klopp the opportunity to make 4 to 6 changes.

Yeah I expect Klopp went with Matip and VVD after watching the Man Utd game as it was very similar in the way the second half panned out.

Konate will doubt start on Saturday and I’d expect Elliott and Diaz too.

Wouldn’t surprise me to see Diaz in this though if truth be told. Jota and Thiago will come in that’s obvious.

Ref is Szymon Marciniak that’s the same one who loved all the AC Milan playacting at Anfield the last time. Another fucking …

Although their recent history (and success) is smudged by (dirty) money, Internazionale is a proper football club. In Javier Zanetti and Esteban Cambiasso they had two of my favorite players. Zanetti reminds me of Milner; a no-frill, no-fuss player always giving 110% for the team.

Inter are currently second, with a game in hand, in the league table. Since January, they have beaten Lazio, Roma, and Milan, and have drawn with Atalanta and Napoli. Edin Dzeko is their top-scorer (13 goals in all competition) and that probably is a symptom of their weakness.

Very humbled and happy that Inter fan group the Curva Nord is planning to pay tribute to the victims of the Hillsborough disaster during the upcoming game. Respect.