Someone’s got to do it, and all the other wasters @GermanRed @Kopstar are just busy shirking responsibility. Guess sometimes you just can’t rely on others…

Anyway, on to the match. Crystal Palace have been a tricky one for many teams, well, just one team in particular. Hopefully we’ll do better than that, and come away with all 3 points and no injuries.

Just keep on grinding, match after match. Whether or not we win the title in the end, never give up.

Lawro predicted us a 1-1, so i’m fairly confident of a comfortable win.

I’m taking a rest until the FA Cup.

Palace will be a different kind of Animal compared to Brentford. More quality but I think under Viera they are playing a style that suits us more. 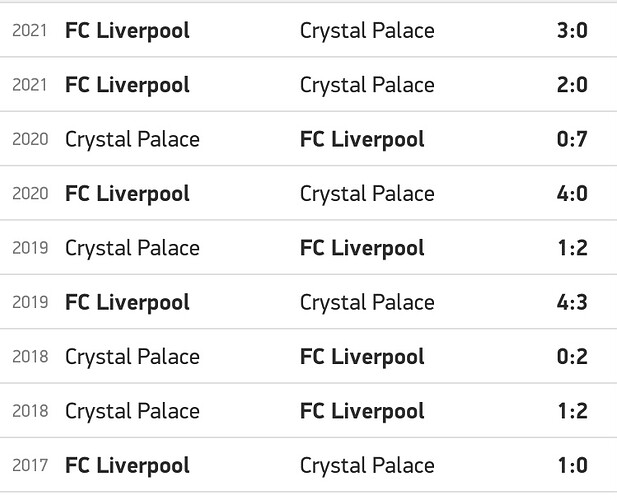 We’ve won the last 9!!! games against them. Would be a real shame if don’t make it 10 because we are without Sadio and Mo.

Matip or Konate?
I think Jones, Fab and Hendo in midfield. Presumably Thiago or Elliot are not back in time?

Jota, Bobby and Minamino up front

They actually are really shit. Even without Mo/Sadio/Naby, we should have too much for this shower of fucking shite.

Once again, a considered and astute analysis.

Once again, a considered and astute analysis.

It’s our lofty standards to which we hold ourselves that separates this forum from the rabble.

They actually are really shit. Even without Mo/Sadio/Naby, we should have too much for this shower of fucking shite.

They’ve also lost loads of their first eleven to AFCON as well.

Let’s just get this done.
Palace can be awkward but so can we!

Palace will be without Zaha and Kouyate.

They’ve also lost loads of their first eleven to AFCON as well.

So why isn’t the game off?

Fingers crossed Ox can start this one, thought it was much better balance with him at RW rather than Minamino. Failing that maybe another start for Gordon? Apart from that I think the the team picks itself; Konate if Matip not fit.

So, Alisson back between the sticks for us.

We’ll see if it’s Matip or Konate. If Joel is fine then it’s probably him.

We’ll see if we have to make a little change at full back, maybe Tsimikas? If Robbo can do one more game, then no change.

We’ll see if we can go with the same midfield 3 or maybe Milner needs to come in for Jones?

And up top it depends on Ox, if he can be available for Sunday and from the start (play the majority of the game).

Milner for Jones stops any creativity we generate from that area.
I would have Milner for Hendo at the moment as Hendo is in a poor vein of form.