The first Liverpool game to be PPV… Fuck that… Donate instead (and find other means to watch)… Refuse to line Murdochs pockets further. 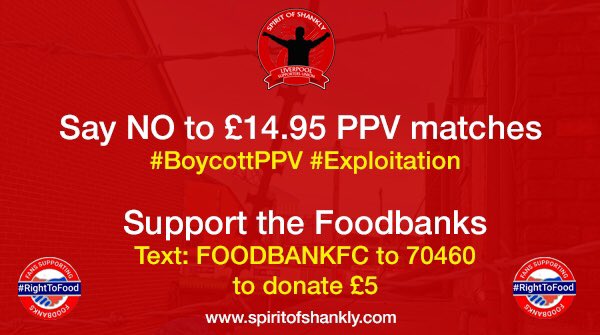 Sky can shove their PPV up their arse. I’d have paid a fiver. Not paying £15

I’ve donated to the FoodbankFC cause instead.

Too early to open this, let’s get past the game on Wednesday first.

I’m not paying to watch it either, I pay enough already. I’ll listen to Radio 5 live instead.

Will be more than happy to give a 5er to FoodbankFC and listen to it on 5 Live instead. Prefer to listen rather than watch games these days anyway.

I think a lot of people would pay a fiver…bearing in mind we’ve already paid our monthly subscription.

Bein sports 11 are showing it I’m told. I pay enough.
I think we should get used to Fab at CB, I know klopp said Matip might be in contention but I would leave him on bench. Depending on tomorrow nights game maybe time to start Jota and Minamino.

time to start Jota and Minamino.

In goal and at centre back.

Won’t be paying to watch this, and can’t be arsed streaming it either. I’ll be watching the UFC instead. 5 quid donated.

Has Curtis Jones been left out of the Premier League squad? He won’t be too happy about that.

Has Curtis Jones been left out of the Premier League squad? He won’t be too happy about that.

Thanks, I obviously read it wrong. It’s an age thing.

It’s on Ziggo Sport over here so I’ll watch. Hope Thiago is back.

Oh, and Mike Dean is the referee with Andre Marriner at VAR.

Oh, and Mike Dean is the referee with Andre Marriner at VAR.

I’m at the point where I don’t care who the ref is. They are all fucking useless. I used to be lifted seeing Oliver had the game, but he’s been a twat of late.

Is it normal to only have 1 ref at VAR in the EPL? I remember from last season it was either a La Liga match or a Champions League match, but there were 3-4 people in the VAR room. I think the more refs there are at VAR, the more these mistakes can be prevented

Have not paid to watch football for a long time. Had depended on some free streams which is of high quality for a number of seasons now.

Back to the match, regardless of what happens in mid week, we need to grind out a win, whether var or the ref or luck are against us.