We are playing against the Mancs. Let’s put a strong team get a goal and that will get our players confidence back. We can win this game.

How much time until the match after this one? In my book, it’s the only important factor ahead of this game, and which should decide who plays or not.

Thursday away against Spurs. Should be enough time between the games.

After this season so far I am also not a fan of too much rotation. Rather try to find some consistency.

Let’s play like bitches with the bitches. Let’s be aggressive, physical and cynical. If you can’t get the ball, take the ankle instead, even better if it’s the knee-cap. We will get screwed by the referee and VAR anyhow, let’s not pull down the pants and bend over. There’s no point being fair if there’s no point in being fair.

If you are too jittery with Origi, Salah can play up top and Milner can play RMF and Neco at RB.

Play the reserves. Get out of this cup ASAP. It shouldn’t even be happening ffs.

Did you see him vs Utd?
Surely he is now a busted flush?

He came on for 5 minutes at the end of the game.

He came on for 5 minutes at the end of the game.

Showed more in his time on the pitch than the other three have for weeks. Shame he didn’t put that chance away though. 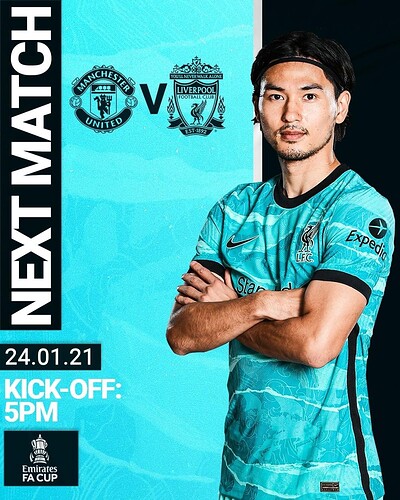 It’s green,i’ve got that top and i’ll launch anyone that tells me it’s blue.

Your weed is green. The kit is blue.

It’s turquoise, it’s a colour between the two.

Maybe Klopp’s tactic is to blind the opposition for this one.

If the referee is aware that Fabinho is one yellow away from suspension, then guess what will happen tomorrow.

If the referee is aware that Fabinho is one yellow away from suspension, then guess what will happen tomorrow.

Yes, I believe it does. Although Poulson might make doubley sure and give him a straight red at some point.

I googled it and it’s changed this season.
In the past, yellow cards picked up in the Premier League , football leagues, FA Cup or Carabao Cup would be added up together. … However, the changes this season will see yellow cards only counting in the competition they are received. Red cards will continue to count across all competitions.

Im not for purposely going out of this cup but i think we should do something that we should have done from the start. No more weakening the midfield to strengthen our already weaker defense. I would however rest Matip and think we need to give Fab tomorrow off because i dont want him to pick up his final yellow before a ban.

This keeps our midfield strong and hopefully the 2 dms can protect the CBs and still spray passes to Mo and Mane who have enough pace to get behind their CBs. Rest Matip as he’ll be needed for Spurs, same with Fab but get Fab a yellow that game, i’d rather him miss West Ham or Brighton than City or Leicester. If this works stick Matip and Fab as CB for those games, if not switch to 433 with Matip and one of the kids and Thiago, Fab and Hendo behind our main 3.

Lastly i understand people wanting to drop Bobby but i’d rather give him a chance to play himself back into form. With the game tomorrow i’d hope we go hell for leather to score a goal, fast pressing etc but i’d tell our FBs to not cross the halfway line. Both are capable of putting crosses in or cross field passes for Mo or Mane from the halfway line. Their biggest danger is the pace of Rashford against Rhys so holding a deeper line with all 4 defenders with 2 DMs in front should prevent that.

Someone will mention we’ll concede with those CBs, i honestly dont care. So fed up of not scoring i’d rather lose 6-5 than draw 0-0 and go to penalties. Our team needs to start scoring again.

Edit, RedOpium just posted as i wrote this. If the yellows dont count in this then Fab instead of Rhys or 433 with Fab taking Takis place.