Complete game changer for me, I weas hooked and got myself a Mokka when I got home.

I typically have a 3 shot espresso in the morning and no other caffine, this lead me to the perfect coffee after trying several;

Danger, danger – there’s a storm coming. This is coffee on the brink of savagery, overcharged with caffeine and roasted ultra-dark to unleash ferocious flavours of spice and cedar. Plug in, juice up and get wired.   Roast 7

I found out recently this was a limited edition and the Strength 6 version (what I’ve fallen back to) just hasn’t got the same kick I like.

Tbh I felt like I was about to have a heart attack and spent the next 15mins feeling anxious and weird, so that strength is a bit too much!

So opening up to suggestions for alternatives?

I tend to drink coffee as my hot beverage of choice, as I began to find tea a bit hard on my stomach, but about a year ago I switched to only decaf, and haven’t looked back. Caffeine just wreaks havoc on your body.

I felt like shit for about a week, but since then I haven’t noticed any difference in terms of energy etc.

…as I began to find tea a bit hard on my stomach,

That’s interesting, I would have assumed coffee would have been harder on the stomach than tea.

I think it’s the tannin.

With the growth in popularity of coffee in the UK, I would think there must be independent Roasters that may be able to replicate the Taylor version you had, or could perhaps advise on a suitable alternative?

Yep, I am trying out some, was hoping someone could skip the process with a good find.

I like a simple taste, no fruity undertones etc.

I love coffee, used to take 5 cups a day until my heart was palpitating that my doctor asked me to reduce. Now probably 2 a day. Best thing for me in Singapore is having choices the expensive coffee at some ‘westernized’ cafe or very good local coffee at less than 1 UK pound.

I presume this is what you fell back to https://www.taylorsofharrogate.co.uk/products/hot-lava-java/ if not perhaps worth a try but it’s a blend from various regions which use different processes of production.

So if that’s not what your looking for it would be worth trying this https://www.adamsandrussell.co.uk/product/productjava-full-bodied/

When in England my mom always has some Taylors (usually medium roast but for me will get in some darker roasts). All of them are good. Occassionally she will have some Adams and Russell coffee which I also find good.

Generally I just buy the cheapest 100% Arabica coffee I can find that doesn’t taste like shit and doesn’t give me that caffein buzz that makes you feel like the worlds falling on top of you. I drink gallons of the stuff it’s no longer a pleasure for me rather a necessity.

You like strong coffee? This is the real stuff: 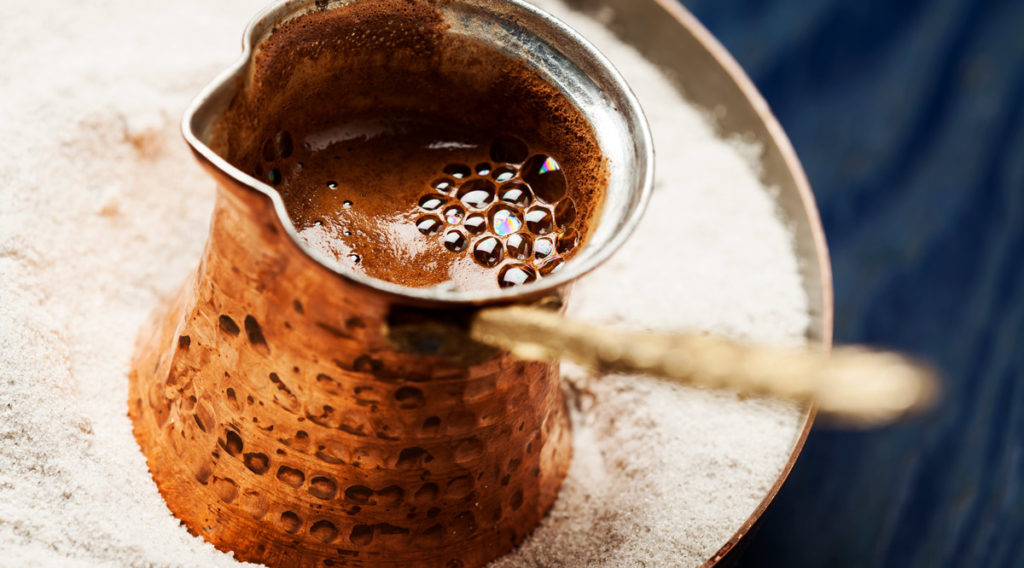 Turkish or Greek coffee. The brewage called ‘coffee’ which one can find in England tastes like dishwater in comparison with this.

Funny story on something that happened to me several years ago.

I was lodging with a good friend at the time and we were both keen kite surfers. He was going to see a friend in Brighton one weekend and invited me along for a kite surfing session which consisted of what is known as a down winder. Basically you start in one place and finish somewhere else down wind. The only downside was he was staying for the weekend so I had to catch a train back.

Anyway the kiting was fantastic. Over 3 hours on the water all in and a pretty full on session it was. Legs wasted and my core muscles utterly ruined. We then went for some lunch where a couple of bevies were had. Later on we also decided to have a couple of expresso’s.

Christ what a mess I was in. Physically shattered from the early start, 3+ hours of full on kite surfing and a couple of beers, followed by a utterly massive caffeine injection. The train journey back to Maidenhead (where I was lodging at the time) from Brighton was pure hell. I honestly didn’t know whether I wanted to sleep, run a marathon or both. I ended up like some quivering jelly in the seat I think.

That combined with an unfortunate Vodka Red Bull encounter that lead me to run 4 miles home one night after a party has led me to the conclusion that I need to be wary of my caffeine intake.

Still enjoy a good coffee though.

If the house was burning down, I would grab this first. My wife and son both have legs, they can look after themselves.

Melbourne has the second best coffee in the world.

Italy will always be number one for me. A cappuccino and a fresh ciambella for breakfast…

We have an annual christmas treat, Harrod’s Italian Roast. Just gorgeous in a cafe tiere. Do have an espresso machine / steam generator and bean grinder for special occasions but the Harrod’s stuff is gold

Oh yeah, this is the stuff. I drank it just once.

As for coffee, the readymade variety we have here (Nescafe) is worse than chocolate drinks.

Better to have some nicely brewed tea instead.

I don’t drink much tea, and every time I do I think to myself, I need to drink more tea.

Gotta work on that…

My wife and son both have legs, they can look after themselves.

Didn’t know there was a coffee thread!

I’ve become somewhat obsessed with coffee during the last 2-3 years. Got an array of equipment at home, and have subscriptions for beans every couple of weeks.

Perhaps this thread can be renamed ‘Playing With The Bean’