What would you do to reform European football?

Thread for brainstorming ideas for the reform of European football. In light of the news from the 12 rebel clubs to create a breakaway European Super League and UEFA’s own proposals for revamping their European Competitions, which are basically shit, what would you do?

Cover as many or as few issues as you want, such as:

We can then try and collate the best ideas together. Will be interesting to see what sort of set up evolves given the wide range of views expressed in the other thread.

The domestic game needs to survive but I can’t see how it can co-exist with a competition that is effectively a closed shop. Yes it may expand in time but not at the level it would have too, MLS expansion is probably the best example but they are completely new clubs entering a system that is controlled and managed.

I don’t think the clubs or organisations that use the players should manage this, it should be an independent governance structure. The money in this league means you don’t need to charge £70+ for a jersey or charge anything over £20 for tickets but trust me those prices will continue to rise.

To me you earn the right to play in the big competitions and that goes for UEFA’s awful plan as well.

I’d probably ask JP Morgan to fund a breakaway super league in Europe, involving 15 or so of the top teams from the biggest leagues, but allow maybe 5 or so more to enter each year based on merit.

I don’t think the clubs or organisations that use the players should manage this, it should be an independent governance structure.

Fifa forbids government involvement and have banned associations before even when it was plainly clear that on certain occasions those associations were as corrupt as Fifa is.

The starting point has to be around governance and conflict of interest.

UEFA, FIFA and the domestic associations all act as the games governing bodies often in direct competition with each other, and at the run competitions which don’t work harmoniously.

A real financial fair play regime - one with teeth - would solve a lot of my concerns.

And criticism without alternative is pointless. So has Carra thought through the implication? What would it mean to choose to sit out this change. Honoring our history by removing ourselves from the top table?

The silence in this thread proves your point how criticism has gone over the top, without any alternatives being suggested by anyone.

Sadly the alternative to greed, is the existing greed itself. This has now become the case of choosing between the two evils. Football has been destroyed long before and personally don’t see a way back now.

The one thing that could help bring back sanity is proper implementation of FFP, clubs that have grown organically over the years not just booted away by some rich oligarchs buying trophies. But that isn’t an option anymore, is it?

What changes had been proposed by UEFA for the CL?

A real financial fair play regime - one with teeth - would solve a lot of my concerns.

Yeah, that’s the critical point for me too. At the end of the day, UEFA and FIFA might have governance and also some corruption problems, but they represent the clubs. All clubs, not only the few powerful ones. This is something the big ones don’t like at all.

The problem comes from the shift in power towards those few massive clubs over the two three last decades or so. The available money is being progressively syphoned by them, at the expense of the perceived ‘smaller’ clubs.

Platini, with his FFP idea, tried to throw a spanner into that ever-increasing movement. He was absolutely crucified for it. Since then, FFP has been progressively eviscerated, diminished, and finally, ridiculed by that latest CAS judgment, exonerating Man Cheaty despite of finding them guilty of severely breaking the FFP rules.

As long as this kind of things go on, there is no way out. My take is that governments have to take it into their hands. The business of football is massive, and it has really brought shady people on the fore. That was always the case up to a point, but what we are witnessing lately is an attempt to confiscate the game.

The only solution imo: new regulations decided by the state, after a thorough democratic debate.

Get rid of international breaks!
Scrap the europa league! 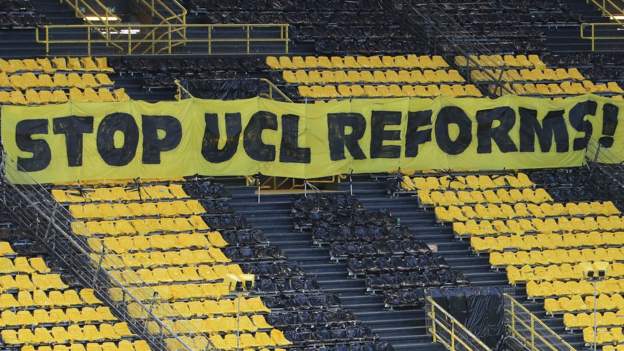 The revamped 36-team Champions League is agreed with the new format due to start in 2024.

Not too far different

Thanks, not much detail there but it does suggest club involvement in running it was the ‘critical’ point for agreement. Glassers not satisfied.

It is though isn’t it.

My major concern is you don’t actually play the teams in your group.

The format has been criticised by fans’ groups, not least because two of the additional four slots will be allocated on the basis of past performance, to the clubs with the highest Uefa co-efficient that did not qualify for the Champions League automatically - but did qualify for another European competition.

If the process was in existence this season, Liverpool - depending on the outcome of the domestic cup competitions - and Chelsea would have been the clubs who stood to benefit.

It’s 2 teams who have been added in addition, the Super League doesn’t have half of Europe involved and is giving randomly 5 slots away to bulk up the 20 team league. Teams from across Europe still qualify as they would, It’s absolutely chalk and cheese, and I hate UEFA, I think the Euros sucks and I don’t even understand the point of changing the format, you can’t look at the 20 team European Super League restricted to about 5 nations with the same teams in every year and say oh look they are the same.

As you say the defence rests

As you say the defence rests

At least it isn’t out for the season.

Rather than overcomplicate this I think I would adopt UEFA’s proposals as a starting point. I think there are too many teams and too many matches but I’ll ignore that for now.

Some elements that I think would be a good idea are:

Stringent FFP. Similar to what we already have but make them properly enforceable. City have shown their weaknesses, address that.

Given we agree that this, ultimately, is all about TV Revenue, I was thinking about this earlier.

I think teams have to be allowed to broadcast their home games. That’s a concession that both the Premier League and UEFA have got to allow if they want to head this off.

So where does this leave Sky and BT (and the others)

I think it’s possible to have a dual system when a game is broadcast by both a club (if it so wishes) and a broadcaster like Sky.

It means those packages are worth less money, but maybe that doesn’t matter so much if money is being generated and is cascading from the from the clubs themselves.

Sky/BT then end up catering for the football fans who want a general package, while the clubs can sell directly to the fans who just want to access their teams games.

Yep, the clubs would own the broadcasting rights to their home games but can choose to sell various packages to existing broadcasters like Sky, BT Sport, Amazon etc. The clubs are then responsible for monetising their own ‘spectacle’. Clearly this is tailor made for FSM and NESN who could license games to these broadcasters or run their own online subscription-based content (LFCTV - Go).

Surprised we haven’t seen the English PL TV, cant expect the blackout will last, in fact I expect that might come from below when teams realise it’s an additional source of income and isn’t replacing fans turning out.